You are here: Home » Articles filed under: 'News' » Article: 'How Cook became a contested symbol'

How Cook became a contested symbol 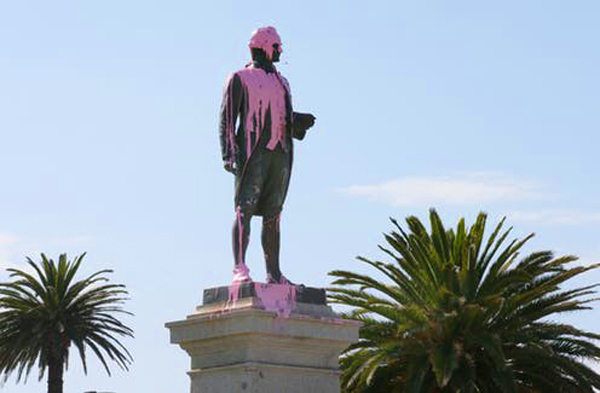 Tracy Ireland, How Captain Cook became a contested national symbol, The Conversation, 11 May 2018

Captain Cook has loomed large in the federal government’s 2018 budget. The government allocated $48.7 million over four years to commemorate the 250th anniversary of Cook’s voyages to the South Pacific and Australia in 1770. The funding has been widely debated on social media as another fray in Australia’s culture wars, particularly in the context of $84 million in cuts to the ABC.

Closer scrutiny suggests that this latest celebration of Cook may serve as a headline for financial resources already committed to a range of cultural programs, at least some of which could be seen as business as usual. These include the development of digital heritage resources and exhibitions at the National Maritime Museum, National Library, AIATSIS and the National Museum of Australia, as well as support for training “Indigenous cultural heritage professionals in regional areas”.

However, the budget package also includes unspecified support for the “voyaging of the replica HMB Endeavour” and a $25 million contribution towards redevelopment of Kamay Botany Bay National Park, including a proposed new monument to the great man.

So while the entire $48.7 million won’t simply go towards a monument, it’s clear that celebrating the 250th anniversary of Cook’s landing at Botany Bay is a high priority for this federal government.

In 1770 Lieutenant (later Captain) James Cook, on a scientific mission for the British Navy, anchored in a harbour he first called Stingray Bay. He later changed it to Botany Bay, commemorating the trove of specimens collected by the ship’s botanists, Joseph Banks and Daniel Solander.

Cook made contact with Aboriginal people, mapped the eastern coast of the continent, claimed it for the British Crown and named it New South Wales, allowing for the future dispossession of Australia’s First Nations. He would later return to the Pacific on two more voyages before his death in Hawaii in 1779.

Scholars agree that Cook had a major influence on the world during his lifetime. His actions, writings and voyages continue to resonate through modern colonial and postcolonial history.

Cook continues to be a potent national symbol. Partly this is due to the rich historical written and physical records we have of Cook’s journeys, which continue to reward further study and analysis.

But the other side to the hero story is the dispossession of Australia’s Indigenous peoples from their land. As a symbol of the nation, Cook is, and has always been, contested, political and emotional.

There are other European contenders for the title of “discoverer of the continent”, such as Dirk Hartog in 1616 and William Dampier in 1699. However, both inconveniently landed on the west coast. Although Englishman Dampier wrote a book about his discoveries, he never became a major figure like Cook.

Cook’s legend began immediately after his death, when he became one of the great humble heroes of the European Enlightenment. Historian Chris Healy has suggested that Cook was suited to the title of founder of Australia because his journey along the entire east coast made him more acceptable in other Australian states. Importantly, unlike that other great contender for founding father, the First Fleet’s Governor Arthur Phillip, Cook was not associated with the “stain of convictism”.