You are here: Home » Articles filed under: 'News' » Article: 'How did the Benin bronzes come to Europe?'

How did the Benin bronzes come to Europe?

January 22nd, 2021 | Browse other: News. | Tagged with: Colonial Violence and Cultural Restitution, How Did the Benin Bronzes Come to Europe?, The Brutish Museums: The Benin Bronzes, UK's punitive raid on the Benin Palace in 1897 | 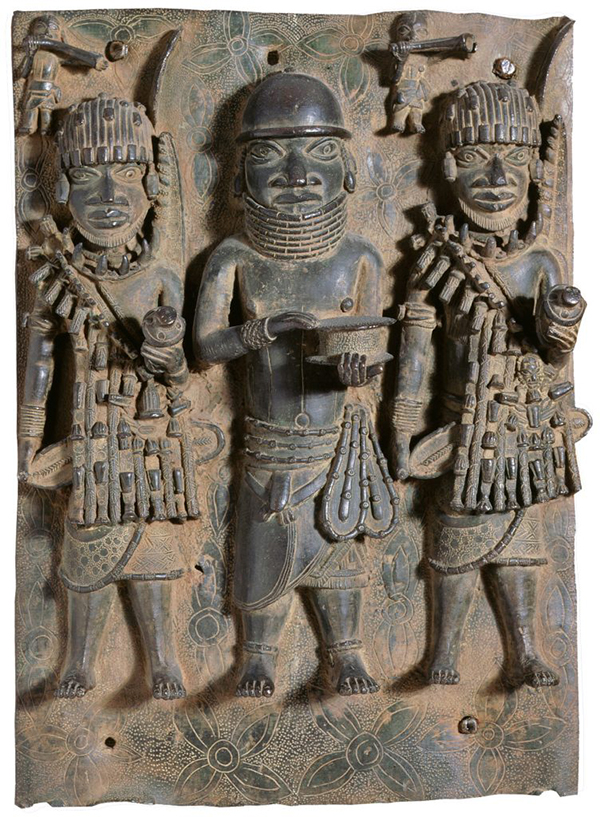 Dan Hicks, How Did the Benin Bronzes Come to Europe? Here’s How Colonial Powers Raced to Loot Them Amid a Program of Imperial Destruction, ArtNet News, 16 December 2020

Author Dan Hicks takes a detailed look at what really happened before and after the UK’s punitive raid on the Benin Palace in 1897.

In his acclaimed new book, The Brutish Museums: The Benin Bronzes, Colonial Violence and Cultural Restitution, archaeologist, anthropologist, and Oxford’s Pitt-Rivers Museum curator Dan Hicks investigates the motivations behind the British raid on the Benin Palace in 1897, which led to treasures being distributed around Western collections. This is an excerpt from a chapter titled “Looting.”

As Charles Hercules Read’s attempts to collect Benin “relics” gathered pace during 1898, the active and extensive buying-up of Benin material by German museums was documented by his colleague Ormonde Maddock Dalton. Soon after news of the looting, ethnographer Felix von Luschan, assistant to director of the modern-day Ethnology Museum in Berlin, sent a telegram to the German consulate in Lagos asking to acquire bronzes and other loot circulating there “regardless of the price,” an approach which led to the acquisition of some 263 objects.

In visits to Hamburg, Berlin, Dresden, and Leipzig in July 1899, Dalton noted how Berlin’s Ethnology Museum alone through “liberal gifts, consular assistance, and important pecuniary support from non-official sources” had acquired “Benin collections in many ways superior to those in the British Museum,” including 12 carved ivory tusks and 30 to 40 bronze heads. As the first director of the Museum of Art and Design in Hamburg put it in May 1899:

The spoils [Ausbeute], insofar as they did not reach the British Museum, were quickly scattered across the continent’s museums. Much reached Germany via Hamburg, a large number to Berlin, important pieces, including some of the most beautiful ironwork, have remained in Hamburg. For the Bavarian Ethnographic Museum Dr Büchner acquired a number of good examples, mainly carvings.

Why are the facts so vague? It was the sheer force with which Benin City was destroyed, the ultra-violence with which the town and its wider landscape were decimated, a culture attacked with the intention of the erasure of one form of sovereignty and its replacement with colonial governance, that led to this scattering, this fragmentation. But the role of the market was and is also a central driver. The annihilation of the Royal Court’s material culture was a new but coherent next step in the growing momentum of corporate militarist colonialism—of destruction for extraction in the name of profit. A sense of necrography—of the knowledge of human and cultural loss—informs our understanding of how every day that our museums open their doors to retell the story of the punitive expedition with the loot that was taken, this loss is re-enacted, and thus re-doubled and extended across time and space. 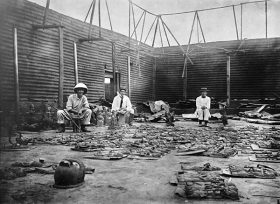 But this violence of western anthropology museums, the continuing loss, the sheer hypocrisy, begins with the fact that in these supposed safety deposits for universal heritage, today’s curators’ understanding of what is even in collections is so minimal. We don’t know what there is. We’re not sure where it is. We can’t say for sure how it got there. Mostly, curators are encouraged not to share what they do know—never mind what they don’t. This is generally not what curators themselves want, of course, but is rather the product of a set of circumstances, from institutional inertia to directorial caution, the wrong people on trustee bodies, and ill-informed governmental interference, which combine to make time, resources, and freedom to speak out scarce commodities at the coalface of day-to-day curatorial life. Most curators want this to change—but then in the UK there are so many important “orphaned” collections where there isn’t even a curator to do this crucial work. This shameful situation has to change.

For now, let us underscore how the power of the nation state has been consistently over-estimated in discussions of the Benin looting—as if the taking of objects were an explicit colonial policy that we need to justify today, as if all the looted objects were in national museums like the British Museum, as if the sole terrain of critique should be that of the nation state in isolation from the corporate-militarist-colonial enterprise. A previous generation of western scholars used the Benin looting to critique the role of colonial heritage in the support of the nation state, based on the idea that imperialism was mobilized towards “promoting” national unity. 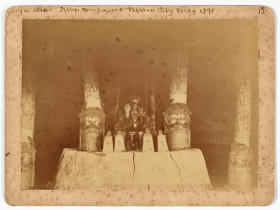 Photograph of an ancestral shrine at the Royal Palace, Benin City taken
during the visit of Cyril Punch in 1891. Eliot Elisofon Photographic Archives, National Museum of African Art, Smithsonian Institution.

Instead, I want to be guided by the motto: as the border is to the nation state so the museum is to empire. The agency lay not with Whitehall, the seat of British government, alone, but in some far more dangerous zone: that of corporate colonialism, extractive militarism, a harbinger of the disaster capitalism, the ultra-violence, and the racist dispossessions and even exhibitionist regimes that the 20th century would bring not just to West African culture and sovereignty but to the soils of Europe. West Africa lived through a foundational moment for a new kind of race science during the 1890s, one that was driven by what historian Max Weber called “booty capitalism”—a concept that connected Britain’s early modern slave-trading and piracy with late Victorian militarist colonialism—and what Marx called “primitive accumulation,” where profit was extracted at all costs. As Cameroonian philosopher Achille Mbembe puts it:

It is necessary to consider the generally conventional distinction between commercial colonialism—or even trading-post colonialism—and settler colonialism properly speaking. Certainly, in both cases, the colony’s—every colony’s—enrichment made sense only if it contributed to enriching the metropole. The difference between them, however, resides in the fact that settler colonies were conceived as an extension of the nation, whereas trading post or exploitation colonies were only a way to grow the metropole’s wealth by means of asymmetrical inequitable trade relations almost entirely lacking in heavy local investment.

To date, western museums have mapped their approaches to cultural restitution onto the geography of settler colonialism, developing connections and relationships with Indigenous “source communities” in North America, Australia, and across the Pacific. The risk for Africa is the indigenization of colonial loot on a North American model.

How, then, to begin to think through what cultural restitution means in the ongoing circumstances of extractive colonialism in West Africa? One first step is to understand not the “life-history,” but the loss; to slice open the museum and to see what cancer is inside.

The Brutish Museums: The Benin Bronzes, Colonial Violence and Cultural Restitution is out now from Pluto Press.