You are here: Home » Articles filed under: 'News' » Article: 'How significant does something have to be'

How significant does something have to be

This cave in the Juukan Gorge, dubbed Juukan 2, was destroyed in a mining blast on Sunday. Consent was given through outdated Aboriginal heritage laws drafted in 1972. Photograph: The Puutu Kunti Kurrama and Pinikura Aboriginal Corporation.

Mining company was given permission to blast Juukan Gorge cave, which provided a 4,000-year-old genetic link to present-day traditional owners.

A sacred site in Western Australia that showed 46,000 years of continual occupation and provided a 4,000-year-old genetic link to present-day traditional owners has been destroyed in the expansion of an iron ore mine.

The cave in Juukan Gorge in the Hammersley Ranges, about 60km from Mt Tom Price, is one of the oldest in the western Pilbara region and the only inland site in Australia to show signs of continual human occupation through the last Ice Age. It was blasted along with another sacred site on Sunday.

Mining company Rio Tinto received ministerial consent to destroy or damage the site in 2013 under WA’s outdated Aboriginal heritage laws, which were drafted in 1972 to favour mining proponents.

One year after consent was granted, an archeological dig intended to salvage whatever could be saved discovered the site was more than twice as old as previously thought and rich in artefacts, including sacred objects.

Most precious was a 4,000-year-old length of plaited human hair, woven together from strands from the heads of several different people, which DNA testing revealed were the direct ancestors of Puutu Kunti Kurrama and Pinikura traditional owners living today.

But the outdated Aboriginal Heritage Act does not allow for a consent to be renegotiated on the basis of new information. So despite regular meetings with Rio Tinto, the Puutu Kunti Kurrama and Pinikura (PKKP) Aboriginal Corporation was unable to stop the blast from going ahead.

“It’s one of the most sacred sites in the Pilbara region … we wanted to have that area protected,” PKKP director Burchell Hayes told Guardian Australia.

“It is precious to have something like that plaited hair, found on our country, and then have further testing link it back to the Kurrama people. It’s something to be proud of, but it’s also sad. Its resting place for 4,000 years is no longer there.”

Hayes said the site had been used as a campsite by Kurrama moving through the area, including in the memory of some elders.

“We want to do the same, we want to show the next generation,” he said. “Now, if this site has been destroyed, then we can tell them stories but we can’t show them photographs or take them out there to stand at the rock shelter and say: this is where your ancestors lived, starting 46,000 years ago.” 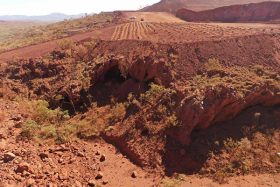 The cave in Juukan Gorge that was blasted. It is the only inland site in Australia to show signs of continual human occupation through the last Ice Age. Photograph: The Puutu Kunti Kurrama and Pinikura Aboriginal Corporation.

The Aboriginal Heritage Act has been up for review, in some form, since 2012. Draft legislation put forward by the former Liberal government in 2014 was rejected after even a National party MP argued it was unfair to traditional owners and did not allow for adequate consultation.

Re-writing the act was listed as a priority for Labor before their election win in 2017, and last month Aboriginal affairs minister Ben Wyatt pushed back the final consultation on his draft bill until later this year due to the coronavirus pandemic.

The new legislation will provide options to appeal or amend agreements to allow for the destruction of heritage sites, Wyatt said. He wasn’t aware of the risk to the Juukan site, or its destruction, until Monday.

“It will provide for agreements between traditional owners and proponents to include a process to consider new information that may come to light, and allow the parties to be able to amend the agreements by mutual consent,” he said. “The legislation will also provide options for appeal should either party not be compliant with the agreement.”

In its submission to the legislative review, Rio Tinto said it was broadly supportive of the proposed reform but that consent orders granted under the current system should be carried over, and that rights of appeal should be fixed, not broad or subject to extensions, lest it “prolong approvals or appeals processes at a critical point in the project.”

A spokesman from Rio Tinto said the company had a relationship with the Puutu Kunti Kurrama and Pinikura people dating back three decades, “and we have been working together in relation to the Juukan area over the past 17 years”.

“Rio Tinto has worked constructively together with the PKKP People on a range of heritage matters and has, where practicable, modified its operations to avoid heritage impacts and to protect places of cultural significance to the group,” the company said.

The mining company signed a native title agreement with the traditional owners in 2011, four years before their native title claim received formal assent by the federal court. They facilitated the salvage dig in 2014, which uncovered the true age of the site.

Archeologist Dr Michael Slack, who led that dig, said it was a once-in-a-lifetime discovery.

An earlier 1 metre test dig, conducted in 2008, dated the site at about 20,000 years old, but the salvage expedition uncovered a “very significant site” with more than 7,000 artefacts collected, including grid stones that were 40,000 years old, thousands of bones from middens which showed changes in fauna as the climate changed, and sacred objects.

The flat floor of the cave allowed for a significant depth of soil and sand to build up, creating a layer almost two metres deep in parts. Most archeological digs in the Pilbara hit rock at 30cm.

Most significantly, the archeological records did not disappear during the last Ice Age. Most inland archeological sites in Australia show that people moved away during the Ice Age between 23,000 and 19,000 years ago, as the country dried up and water sources dried up. Archeological evidence from Juukan Gorge suggest it was occupied throughout.

“It was the sort of site you do not get very often, you could have worked there for years,” he said. “How significant does something have to be, to be valued by wider society?” he said.