You are here: Home » Articles filed under: 'News' » Article: 'How the fall of Purdue Pharma may'

How the fall of Purdue Pharma may 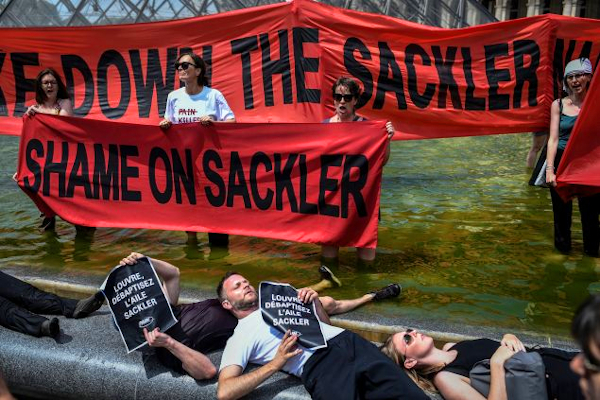 Helen Holmes, How the Fall of Purdue Pharma May Affect Arts Philanthropy in the Future, Observer, 16 September 2019

Over the weekend, a new development in the ongoing Sackler family saga stoked fresh ire amongst those who feel that the well-moneyed clan has been doing everything it can to avoid accepting personal responsibility for the opioid crisis. On Sunday evening, Purdue Pharma officially filed for bankruptcy in the wake of its previous offer, which was to settle the thousands of lawsuits against the company with a payout totaling between $10 and 12 billion. Reportedly, the bankruptcy filing will serve as a block between Purdue and the thousands of plaintiffs who want cash from the behemoth—everyone seeking justice from the company will evidently now have to wade through the layered bureaucracies of bankruptcy court.

In the same weekend, the New York state attorney’s general filed papers that claimed the Sacklers had used hidden accounts and shady trusts to transfer $1 billion to themselves over the years. “While the Sacklers continue to lowball victims and skirt a responsible settlement, we refuse to allow the family to misuse the courts in an effort to shield their financial misconduct,” attorney general Letitia James said in a statement. “The limited number of documents provided to us so far underscore the necessity for compliance with every subpoena.” The increasing scrutiny of Purdue Pharma’s responsibility for the opioid crisis has had far-reaching effects—many arts institutions and philanthropic causes to which the Sacklers have been donors have had to question not only their dealings with those linked to Purdue in the future, but also what to do with the galleries or wings that have been named after members of the family involved in the crisis.

The Metropolitan Museum of Art in New York, the National Gallery in London and the Louvre in Paris are all museums that have all benefitted financially from members of the Sackler family with ties to Purdue, and that’s just to name a few. The point is not to admonish art museums for ever taking (ample) Sackler money. Rather, it feels important, going forward, to ask questions about how the fall of the Sacklers might influence the methods by which artistic organizations evaluate the types of donor funding they accept in the future. No museum wants another PR disaster the size of Warren Kanders or the Sacklers their hands, which means that museum employees will likely be burdened with looking deeper into the backgrounds of potential philanthropists before an exchange can be made.

Photographer Nan Goldin is just one significant figure speaking out about the Sacklers’ role in the spread of opioid-related deaths (she has yet to respond to Observer’s request for an interview). But by advocating vehemently in support of industry reform, Goldin and her anti-opioid collective, P.A.I.N., have made it less and less acceptable for unsavory figures to move about untethered in high society. Goldin’s work is sorely needed, and also in sore need of support across the entire global arts community. Hopefully someday soon, support from people like the Purdue Pharma-affiliated Sacklers won’t factor into the art world’s survival at all.
Positions Vacant » View All
» Head, Visitor Experience – Queensland Museum
» Archivist – MAAS
Latest News » View All
ANMM’s Asst Dir appointed BGSA’s CE
Michael Harvey to change cultural instns Read more.
London’s Garden Museum on Constance Spry
& the fashion for flowers Read more.
European Museum of Year Awards announced
Winners of both 2021 & 2020 awards revealed Read more.
MV on Kofi Kindness – The Gratitude Journal
Kofi, MV & Office of Suburban Development Read more.
MV to receive $33.5M in State Budget
to deliver a new Gondwana Garden Read more.
Top +
Council of Australasian Museum Directors, c/o Ms Daryl Karp, Museum of Australian Democracy at Old Parliament House PO Box 3934 Manuka, Australian Capital Territory 2603 Australia, © CAMD 2021
Copyright: All information and resources provided on this website remain the copyright of the Council of Australasian Museum Directors. Permission is granted for viewing and downloading for personal and not for profit purposes. Those wishing to reproduce any materials for commercial, educational or other uses are requested to contact us.
Disclaimer: The content of this website is provided for information purposes only and is not intended as a substitute for professional advice. No claim is made as to the accuracy or authenticity of the content of the website. The Council of Australasian Museum Directors does not accept any liability to any person for the information or advice (or the use of such information or advice) which is provided on this website. The information on our website is provided on the basis that all persons accessing the site undertake responsibility for assessing the relevance and accuracy of its content. No responsibility is taken for any information or services which may appear on any linked web sites. Hostgator.
.