You are here: Home » Articles filed under: 'News' » Article: 'How we can hand our institutions over'

How we can hand our institutions over 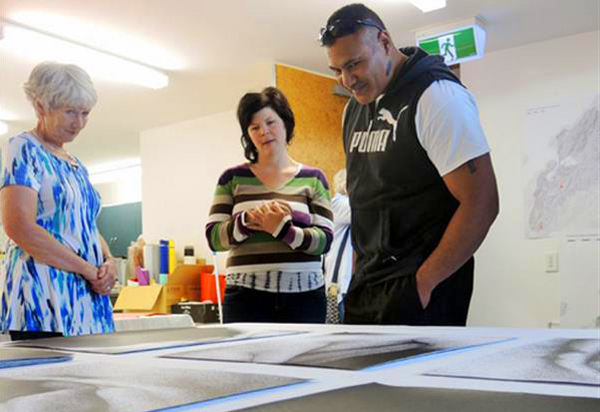 Gina Fairley, How we can hand our public institutions over to others, Visual ArtsHub, March 2018

Three very differently scaled institutions, in three different countries and contexts compare notes on how they ethically represent their communities.

It is not surprising at a professional summit examining the state of public galleries and museums that the microscope would be turned upon the health of institutional relationships with artists and the public.

Glass-Kantor continued: ‘I am of the view that positive shared outcomes aren’t always the best outcomes of a collaboration; it’s often through challenge, through crisis, and through renegotiating the space of the relationship that we learn something more – the ways in which we can change the shape of an institution.’

For the opening panel discussion at this week’s Public Galleries Summit 2018, three speakers from three differently scaled institutions, from three very different contexts and different countries, discussed how they broker curatorial collaboration, plan for succession, allow for culturally diverse voices, and simply, relate at all levels.

Their conversation indicated that while traditional models might be changing, we still have a lot to learn.

Reuben Friend, Director of Pataka Art + Museum in Wellington (NZ), is one of two directors of cultural institutions in New Zealand with Maori heritage. In Australia, we have yet to reach that position, despite the hundreds of public funded institutions across our great nation.

He said that what distinguishes Pataka as a different kind of institution is that it took Maori concepts and put them at the core of the institution. ‘So rather than a conversation about how to include Maori culture, or how can we decolonise our practices, we just put all that to a side and asked, how would Maori create an institution?’

From the museum’s architecture – based on a traditional Marae atea or meeting house – to its programing, everything is done in the Maori way, said Friend.

He added that in New Zealand recently, diversity has become a bit of a ‘dirty word’.

‘It has become a bit clichéd that we have almost stopped saying it.’ He said that in New Zealand, the use of the polarising term ‘white’ is also not used.

‘We tend to say “our European settlers” or “our migrants”. That framing is really pivotal in terms of how we present our shows at Pataka. I have worked in other institutions and have always been caught up with having to do “ethnic shows”, but at Pataka we just do shows with people.’

Part of putting that philosophy into play has included handing over the presentation of the gallery’s heritage collection of objects to Maori artists.

‘We try to break those walls down between art and the museum and often invite a Maori artist to present those heritage displays to give a different flavour. The success is inconsistent, but it is all part of that Maori way of working,’ said Friend.

Similarly, at a recent international symposium organised by Pataka, they decided to take it out of the gallery and conduct it on the Marae (meeting ground), and rather than art world academics invited to respond to the keynote speakers they had ‘keynote listeners’, giving that role over to artists to respond with art.

‘The reviews we got from people is they thought it was clichéd, (claiming) “we do all these things on a Marae it is so clichéd”, and I thought, how lucky am I where we do things so much in an Indigenous way that it can be clichéd,’ said Friend.

It had resonance with a point made by Glass-Kantor in her introduction: ‘Vulnerability is political. How do we as institutions allow ourselves to be vulnerable, to be wrong, to acknowledge when we have made mistakes, and to allow that to change and shape the way we move forward?’

She continued: ‘Frankly, I don’t think democracy works in collaboration but negotiated, transparent roles which allow a degree of trust, and that are established from the outset can enable everyone participating in a process to take a level of risk which they might not themselves.’

Part of that vulnerability sits with succession planning. Friend says that while he is lucky to have this framework at Pataka, he is conscious that should he leave, this way of working could be easily dissipated or disappear.

Friend has been rewriting the institution’s vision statement to include Indigenous positions and an Indigenous education and public programs team, to ensure that succession of vision.