You are here: Home » Articles filed under: 'News' » Article: 'HTSA on the move'

HTSA on the move 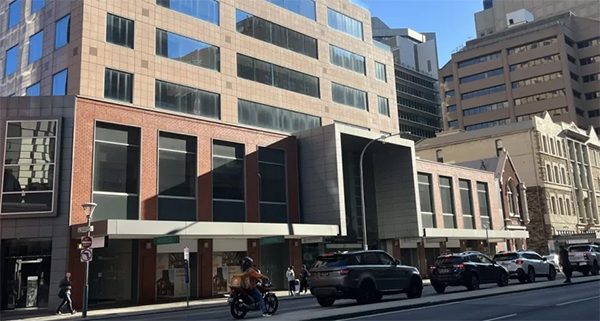 The SA History Trust will move into 77 Grenfell St over the coming weeks. Photo: Stephanie Richards/InDaily.

The SA History Trust will temporarily move into a government office building on Grenfell Street while it searches for a new home, after the Malinauskas Government tore up a controversial deal for it to set up in heritage-listed Ayers House.

A government spokesperson told InDaily that the SA History Trust would move into a “temporary office space” at the Department for Infrastructure and Transport’s Grenfell Street building in coming weeks.

They said the History Trust would stay there until mid-next year while the department works with the organisation to find a longer-term home.

SA History Trust CEO Greg Mackie said the office space was “clearly not a suitable long-term solution”, but the move was necessary while he “actively pursues” an alternative permanent location.

“In a perfect world, temporary relocations are not efficient,” he said.

“We’ve been working very constructively with the Department for Infrastructure and Transport regarding a longer-term alternative, but I’m not in a position at this stage to identify its location.

“The practical reality of the supply chain and fit-out of a new location means that we couldn’t achieve that for the timing that we need to work with.”

It comes after Environment Minister Susan Close in April scrapped a controversial deal negotiated by the former Marshall Government to boot the National Trust from Ayers House.

The Marshall Government had planned to renovate the state heritage-listed building into a new office space for the government-run History Trust, whose current lease at the Torrens Parade Ground Drill Hall expires at the end of this month.

The decision prompted a bitter public dispute and legal proceedings, as the National Trust – a non-government-owned organisation – was originally given only 31 days to move out of the building which it had occupied since 1972.

At the time, Close said the government would review how the $6.6 million that was committed by the Liberals for the renovations would be spent, with the National Trust given the go-ahead to move back into the building which it was forced to vacate.

Mackie previously told InDaily that the History Trust would ideally like to move into a “prestigious state heritage-listed building” located on or near North Terrace.

At the time, he was considering the state heritage-listed Freemasons Hall on North Terrace as one of two potential new homes, citing the building’s proximity to Adelaide’s cultural institutions, universities and the central business district as drawcards.

But he told InDaily this week that it was longer possible for the Trust to move into the building while plans are underway to potentially convert it into a new Adelaide Museum of South Australia’s History.

“If that (the museum) were to come to pass – and I emphasise if – it would be subject to a whole range of processes, including the completion of a full business case for future consideration by government,” he said.

“The option for our headquarters couldn’t be that location simply because it would become – with or without a future Museum of South Australia’s History – a development site for a number of years.”

The History Trust will spend its last day at the Torrens Parade Ground Drill Hall this Friday.

Positions Vacant » View All
» Collections and Database Administrator – QVMAG
» Team Leader Learning & Engagement – QVMAG
Latest News » View All
HTSA secures new North Terrace home
in former Electricity Trust heritage bldg Read more.
ANMM Lunar Sea Chinese NY festival
partnership with China Cultural Center Read more.
AWM’s new galleries take flight
Chinook to join Lancaster in new Anzac Hall Read more.
Pan Arabic “civilisation & art museum“ for
Paris's Arab World Inst’s Jean Nouvel bldg Read more.
British Library £500m community-focused extn
through planning major planning hurdle Read more.
Top +
Council of Australasian Museum Directors c/o Lynley Crosswell, Museums Victoria, GPO Box 666, Melbourne VIC 3001, © CAMD 2023
Copyright: All information and resources provided on this website remain the copyright of the Council of Australasian Museum Directors. Permission is granted for viewing and downloading for personal and not for profit purposes. Those wishing to reproduce any materials for commercial, educational or other uses are requested to contact us.
Disclaimer: The content of this website is provided for information purposes only and is not intended as a substitute for professional advice. No claim is made as to the accuracy or authenticity of the content of the website. The Council of Australasian Museum Directors does not accept any liability to any person for the information or advice (or the use of such information or advice) which is provided on this website. The information on our website is provided on the basis that all persons accessing the site undertake responsibility for assessing the relevance and accuracy of its content. No responsibility is taken for any information or services which may appear on any linked web sites. Hostgator.
.