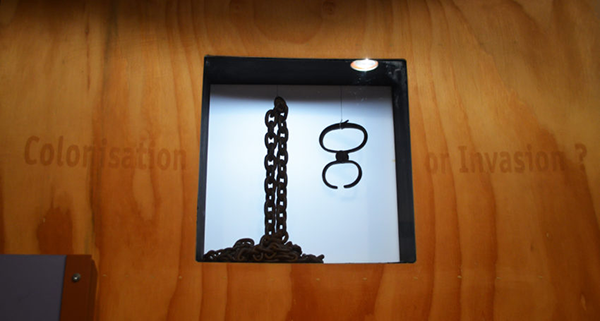 Adelaide’s Migration Museum is preparing to redevelop its 19th-century gallery in 2020 to tell the story of settlement through multiple perspectives and give greater voice to Indigenous Australians.

“The 19th-century gallery positions the visitor in the subject position of a colonist,” Migration Museum director Mandy Paul tells InDaily of the current display.

“[But] what if you’re an Aboriginal visitor? There’s no alternative position in that gallery.”

The display in the Kintore Avenue museum was originally established in 2004 to offer insight into the experiences of British settlers who established new lives in South Australia, as well as exploring their conflict with Indigenous communities.

Upon entering the gallery now, the first thing viewers see, emblazoned in gold, are the words “THE GREAT EXODUS ACROSS THE SEAS” shining underneath a model ship. Hanging nearby are painted scenes from vessels which travelled more than 24,000km from Britain to Australia, while china plates and large guns sit behind glass. 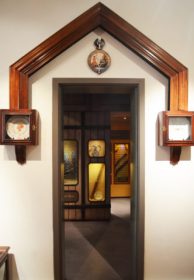 The entryway of the 19th-century gallery. Photo: Angela Skujins / InDaily,

A range of other artefacts, art and text written by Migration Museum employees tells the settlers’ stories.

Deeper within the exhibition are five boards – titled Land, Invasion, Colonisation, Conflict and Retribution – which offer an account of the “early contact” between the colonists and Aboriginal Australians. The words “Colonisation or Invasion?” rests above the panels, divided by an illuminated box containing a chain and shackle.

When the redevelopment of the gallery occurs in early 2020, the aim will be to overcome “dated” histories, and include more of the experiences of Aboriginal Australians to show how colonisation affected them.

Mirning artist and Flinders University academic Ali Gumillya Baker was invited to consult on the space early this year.

“The sort of entryway gallery, gallery three, really positions the visitor as a colonist, as someone on a ship coming from Europe, which is something that we would like to complicate,” Paul says.

“Once that was shared with us [by Baker], it became blindingly obvious.”

Another thing the museum wants to change is the notion of concrete timelines.

“The colonial period, strictly speaking, in South Australia goes from 1836 to 1900 – but Aboriginal people tell us that it hasn’t ended,” Paul explains.

“One of the interesting challenges to us is to convey that the past is always in the present, and so in some ways, the chronological series of our galleries will have to be disrupted.

“The story that we tell [in this gallery] will partly depend on the communities that we work with and what stories they want to share.”

In planning the redevelopment of the 19th-century gallery, Migration Museum staff are speaking to different South Australian Aboriginal communities about colonisation, including Kaurna, Ngarrindjeri, Barngarla, Narungga and Arabana people.

It’s time for us to update the stories and the way that we tell them in partnership with communities
Stories will be told through fresh artefacts and films, as well as through existing objects that will be “recontextualised” and possibly accompanied by different interpretations.

Jade Turner and Jacinta Koolmatrie are the two new First Nations curators who will assist with revamping the space. They are also the first Aboriginal Australian employees hired by the Migration Museum. 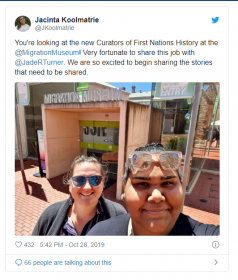 “We could see that both specifically for this project [the 19th-century gallery redevelopment] but also for the organisation as a whole, it was overdue that we had First Nations curators,” Paul says.

“It’s time for us to update the stories and the way that we tell them in partnership with communities.”

Only 38 per cent of national museums and galleries have Indigenous staffers and fewer than half of those fill executive or leadership roles, according to an Australian Museums and Galleries Associations 2018 report.

The Migration Museum operates under the History Trust of South Australia banner. Paul believes the new appointments are in line with the trust’s impending Reconciliation Action Plan, which she expects to have a strong focus on First Nations employment and the involvement of Indigenous people in telling South Australia’s history through its museums and other institutions.

“The Migration Museum has always had a really clear remit of working towards a world that’s better.

“We see our remit as working towards a world which is free from racism, and we do that through telling South Australian stories and through celebrating diversity.”

“Like many other enlightened organisations, we want to do a better job of including and respecting the role of Aboriginal people – both in our history and in the journey of our organisation.” 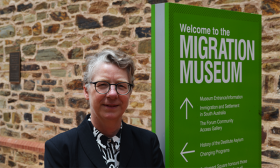 InDaily also sought comment for this story from the new Indigenous curators and Ali Gumillya Baker.

The Migration Museum’s 19th-century gallery aims to be open by October next year. Visit the museum website for more information.