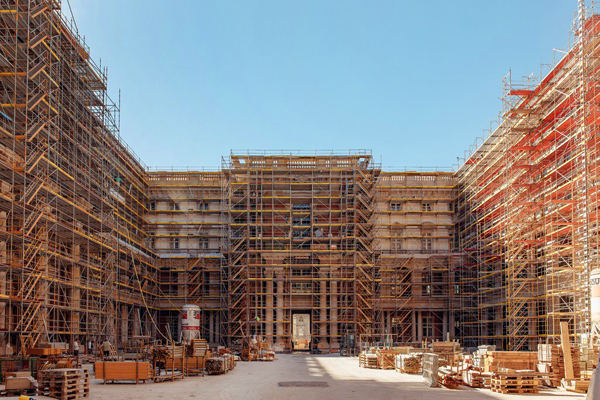 The courtyard of the rebuilt palace that will house the Humboldt Forum, a new museum in Berlin, under construction in July 2018. Credit: Felix Brüggemann for The New York Times.

BERLIN — One Saturday morning in February, about 100 protesters marched loudly through Berlin’s streets to the Humboldt Forum, a new museum rising beside the River Spree.

Wrapped in scaffolding, the Forum, one of Europe’s most ambitious current cultural projects, loomed above them as they gave speeches and held up signs that said: “Tell the Truth About Germany’s Colonial History,” “Clear Out the Colonial Treasury” and “It’s Your Duty to Remember.”

One protester, Christian Kopp, bellowed into a microphone, saying that, no matter what the founders had intended, the museum would forever be associated with the blood of empire. “This,” he said, pointing to the grand stone facade of the Humboldt Forum, “will be a memorial to the colonial era!”

Another protester, Marianne Ballé Moudoumbou, said, “Think about the spirits of those who are still roaming here.”

The Forum, which cost 595 million euros (almost $700 million), is being housed in a rebuilt palace, a fixture of the German and Prussian imperial past that was bombed during World War II. The prospect of objects gathered during the colonial era moving into Kaiser Wilhelm II’s domain has focused further attention on the period, which the nation has never properly processed. Many of the ethnological materials that will be in the museum’s impressive collection were amassed during that era, under circumstances that aren’t altogether clear.

Maybe it was never going to be easy to build a major new museum in a country with such a freighted history as Germany. But the Humboldt Forum has upset a lot of people.

When it opens, there will be huge wooden boats from the South Pacific, a Buddhist temple from 5th or 6th century China and a royal throne from Bamum in western Cameroon decorated with glass beads and shells. A new museum crammed with jewels of non-Western art and culture in the center of the reunified capital seemed a good idea: It would show Germany as confident and open to the world. It would also give the country another world-class institution it could be proud of, comparable to the British Museum or the Louvre.

But as impressive as the museum itself is the vitriolic debate that has arisen. One of the Forum’s three founding directors, the art historian Horst Bredekamp, described the furor as a “psychogram of Germany” and said that the critical pushback is hijacking the original purpose of focusing on German scientific enlightenment and exploration.

The disagreements also provoked the resignation of a well regarded advisory board member, Bénédicte Savoy. “The baby is dead on arrival,” she said in an interview, denouncing the museum as a conservative project that does not reflect a modern Germany changed by immigration and crying out for new thinking.

In the era of a divided Germany, a Parliament building was erected on the same ground. It was torn down a decade ago to make way for the rebuilt palace. This irritated those Germans who thought that you couldn’t rewind history, and that the architecture of their capital should be more forward looking. It saddened Easterners who were aggrieved that their story was being literally erased from the landscape.

Nearly 30 years after East and West Germany were reunited, there is a longing here for an identity that goes beyond the Holocaust and World War II, postwar division, reconstruction and reunification. As modern Germany seeks to define itself in a more complex way, the urge is surfacing to discuss past glories of scientific achievement, history, art and exploration as well as to confront an uncomfortable part of its past.

At the center of these convulsions, the Forum has pitted those who want to move on and celebrate national accomplishments against those who caution that Germany risks forgetting what it was. Germany has addressed World War II and Nazi atrocities, although these achingly difficult parts of its history may be impossible to atone for fully, but it still has not even begun re-examining its colonial era properly, critics say.

“For too long the colonial period was a blind spot in our culture of remembrance,” Monika Grütters, Germany’s federal culture minister, said in a statement.