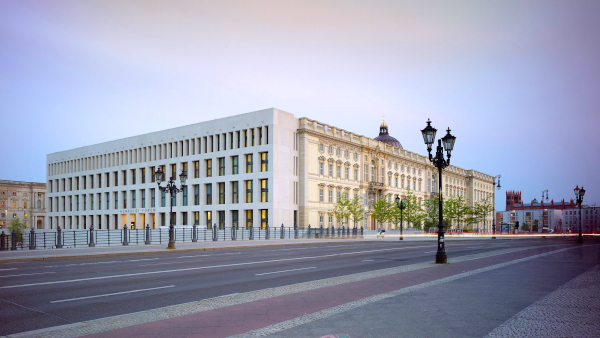 Berlin’s new cultural complex, the Humboldt Forum, has opened the doors of two museums showcasing art and artefacts from Africa, Asia and Oceania – among the most disputed collections that will be shown in the €680m venue.

Largely made up of artefacts from former German colonies, the museums have faced intense pressure in the run-up to their opening to ensure transparency about the imperial history of their collections and, in some cases, commit to returning looted objects.

At a press conference ahead of the opening, Hartmut Dorgerloh, the director of the Humboldt Forum complex, said the institution was dedicated to “examining history in a critical way” and would seek to act as “an international platform for dialogue on the biggest questions of our time”.

Dorgerloh acknowledged the controversy surrounding the collections. “It has been a lively debate that has increased in liveliness over the years and opinions are changing,” he said. “It’s been a process of learning – the change is visible.”

Decolonial practice and transcultural cooperation are at the forefront of the two museums. The Ethnological Museum has strived to create transparency around the object provenance, acquisition history and the contemporary impact of colonialism. Exhibitions feature pull-out drawers and barcodes that offer more information on provenance, while the galleries for some former African colonies display plexiglass reproductions and holograms rather than objects.

In a landmark move earlier this year, the museum committed to returning much of its 520-strong collection of Benin bronzes to Nigeria, where they were looted by British troops in 1897. The institution will continue to make further repatriations, said Hermann Parzinger, president of the Prussian Cultural Heritage Foundation, which oversees Berlin’s state museums. He confirmed that “by next year some objects won’t be here anymore.”

The museum puts an emphasis on working with communities and societies of origin, enabling them to drive new narratives in its exhibition spaces. “We see the potential of stories that source communities want to tell – not just the story of the victim, but different stories looking to the future,” said Parzinger.

“It’s not a traditional museum,” he added. “It’s a place of discourse and change in a world that is changing.”

In 2019 the German federal government committed state funding to research on colonial contexts, allowing the Humboldt Forum to employ four provenance and restitution experts. “This is unique in the world,” said Andrea Scholz, the forum’s officer for transcultural cooperation. “The opening is just part of a process. Our partnerships will continue and will be much more visible in future.” 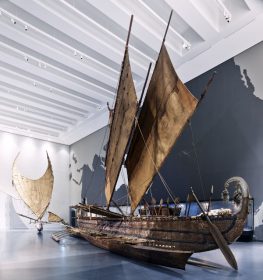 Big Outrigger Boat from the Island of Luf in the Oceania: People and Sea. A sea of islands gallery of the Ethnological Museum © Staatliche Museen zu Berlin, photo by Alexander Schippel.

These partnerships include a project that saw the Ethnological Museum trace descendants of the population of Luf in the South Seas, an island community previously believed to have been wiped out in a massacre by German forces in 1882-83. One of the most controversial objects in the museum’s collection is an Outrigger Boat acquired in the wake of the massacre; the Luf community has not asked for the boat to be returned but will collaborate with the museum to revive traditional boatmaking techniques in order to build a new one.

Although its collections are less contested than the Ethnological Museum’s, the Asian Art Museum also puts an emphasis on transcultural cooperation through collaborations with contemporary Asian artists and practitioners. Exhibitions include a recreated Japanese tea house and a hall dedicated to Chinese imperial court art design by the celebrated architect Wang Shu.

The two museums were previously located in Dahlem on the outskirts of Berlin. Now housed in the west wing of the Humboldt Forum, they form part of a larger complex that also features a university, sculpture gallery and museum of Berlin history, as well as a shop, café, temporary exhibition spaces, and two courtyards. Further cultural attractions are due to open in the building’s east wing next year. 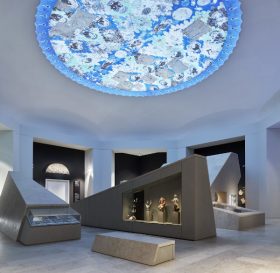 The Humboldt Forum, Germany’s biggest cultural project in decades, has been almost 20 years in the making and was led by team of founding directors that included Neil MacGregor, former director of the British Museum.

The building, which opened in July, has itself been subject to much debate in Germany over its spiralling costs and perceived homage to the country’s colonial era. Designed by Italian architect Franco Stella, it is a replica of an 18th-century baroque palace that was demolished by the East German government, intersected with a more modern design.

The building sits on the site of the iconic Palast der Republik, a GDR-era parliament building and cultural hub that was torn down in 2006.