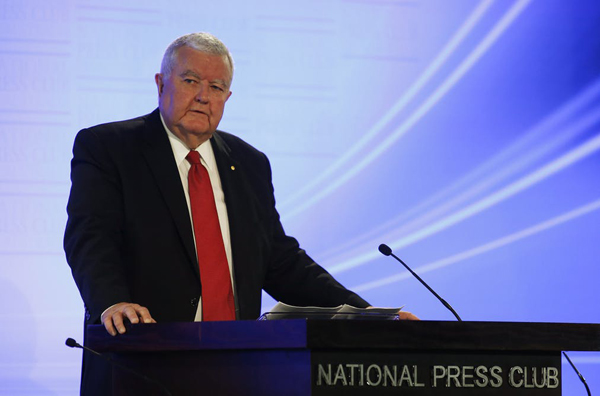 Ian Chubb has been asked by Labor leader Bill Shorten to conduct the first root and branch inquiry into science, research and innovation for a generation.

For those who don’t get on the wrong side of him, Ian Chubb is something of a national living treasure. The former Chief Scientist and vice chancellor of Flinders and Australian National University, Chubb is a larger than life character in every way.

Chubb is our most visible chief scientist in living memory. He’s fearless, determined, strategic and has a pugilist’s love of a bit of biffo. He also has a statesman-like ability to negotiate, cajole and seduce people to his position. And if they still disagree he has a raft of other tactics up his sleeve.

He’s now been named as the guy who can bring coherence to our incoherent research and science funding and policy environment – should the Labor opposition get elected in the next election. Given the anarchy besetting the Coalition government at the moment this is a very likely scenario.

Chubb has been asked by Labor leader Bill Shorten to conduct the first root and branch inquiry into science, research and innovation for a generation. The review will be modelled on the UK’s Nurse review and a similar inquiry in Canada. Underpinning it will be Shorten’s stated ambition of raising the proportion of GDP spent on R&D rise to 3% by 2030 from its current level of 1.8%.

Ahead of the game

While the federal election will most likely be next May, Chubb tells me he is already down to work. After all there is much to be done.

“There is a lack of an overarching strategy to the system,” Chubb says. “We don’t know what the national research profile is, we know there are multiple funding sources that often compete with each other, we know that much of our research is done in universities but that is dependent on undergraduate enrolments.”

We don’t know, he says, how much the research profile has changed since the introduction of the demand-driven system in 2012, which saw many billions of extra dollars flood into the system under student subsidies. Or how much of our national research endeavour is dependent on international student fees.

And that in itself is a major issue: that part of the funding for undergraduates is intended for research but there is no transparency as to how much or where it goes. As Chubb says, this makes the concept of cross-subsidy a dirty word – even though our high-performing research sector is dependent on it.

“We need to make sure we ask the right questions about how and where our limited resources are being spent, that we have the infrastructure to match it and understand how well we fund cross and interdisciplinary research,” he says.

It’s the interconnectivity of the national research endeavour that also interests Chubb. It’s all well and good to have the $20 billion Medical Research Future Fund investing $1bn in grants a year, but unless we have the foundational skill sets of physics and chemistry and the like then all that fancy science might well get undercooked.

One of Chubb’s terms of reference focuses on building long-term sustainable links between universities and industries – a wicked problem that has dogged Australia for decades.

“It’s an enduring issue,” Chubb says. “But we don’t ask ourselves the really hard questions. Because Australia tends to punch above its weight in terms of science the issue is not as acute as it would be if we punched below our weight. There is no question that our best scientists are up there with the very best in the world. (Australia is fifth on Clarivate Analytics list of most highly cited researchers – not bad for a country of just 25 million people).

“But we also have a long tail (of mediocre researchers). And the way in which we fund research also funds the tail because a lot of them are employed under block grants and they are expected to do research because that is how universities are described and defined.”

Before the minerals boom and mass exports in iron ore and coal, Australia was often said to have gained it’s national wealth off the sheep’s back.

Interviewing Chubb over coffee on a warm summer’s day last week, I recalled a parable that he once used to describe Australia’s relationship with science.

He related the story of Chris the sheep who was found wandering far from home barely alive and carrying the biggest fleece ever recorded — all 41kg of it.

“If you are wondering why I’m telling you this, I’d say it’s because Chris is not a bad metaphor for Australia,” Chubb once said.

“From one perspective he was doing very well. Getting by. Wandering along. An individual making his way. And by at least one definition, extremely productive. A model for a great Australian economy (and industrial relations) some might say. On the other hand he was in a great deal of trouble: scabrous, laden with parasites and one dingo away from a very nasty death. This was a sheep weighed down by his own natural advantage.”

Happily for Chris there was a pleasant ending. He was rescued, shorn and retired to a small farm near Canberra. His fleece is on display at the National Museum of Australia, a symbol of our national pride.

“So there Chris’s similarity to Australia ends,” Chubb said. “There won’t be kindly passers by to adopt us and show us how to live a good life. Our transformation will have to come through our own initiative.”

I don’t know whether Shorten has heard the story of Chris the Sheep, but it’s reassuring to hear a change in government will bring with it a change in attitude toward science, research and innovation. We have to remember that it was our current Prime Minister Scott Morrison who brought a lump of coal onto the floor of Parliament, taunting the Opposition to “be afraid” of it. It was a low point (from which Parliamentary antics have, sadly, sunk even lower) but it goes to illustrate that a rise in GDP to 3% will not only require substantial public and private investment but a massive shift in cultural attitudes, including those of our politicians.

A couple of months ago, Chubb was on a panel of high-profile Australians at the National Press Club speaking on the topic of rebooting our faith in democracy.

Unshackled by public office, Chubb spoke his mind – as only he can.

“I believe we (the general public) have to bother. Because if we don’t the outcome will be the Australia we end up with after more aimless drift riddled with infantile posturing and spin, underpinned by self-interest and grounded in a breath-taking hypocrisy that demeans us all.
(And he was only getting warmed up.)

He’s pitched an idea before that all new politicians should be required to undertake basic courses in statistics and science literacy.

But back to his root and branch review. To use a Chubb line from 2014: “”We wouldn’t order a truckload of bricks without knowing the type of house we wanted to build or how many bricks we would need. We’d put our time and money into building the house we want, and why would we do less for Australia?”