June 13th, 2019 | Browse other: News. | Tagged with: mystery of a 600-year-old Buddha buried in the Gascoyne sand, Western Australian Museum | 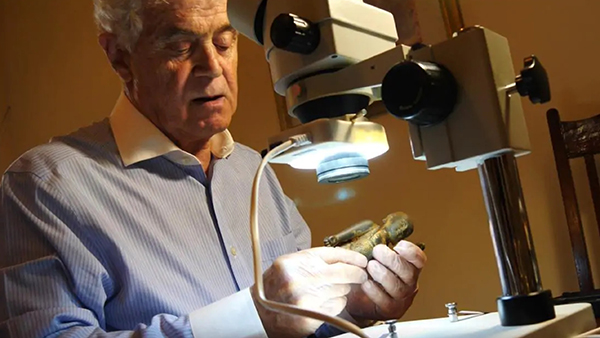 Trevor Paddenburg, The curious mystery of a 600-year-old Buddha buried in the Gascoyne sand, The West Australian, 9 June 2019

A tiny bronze Buddha statue found in the dunes of a WA beach has raised the question of whether the Chinese visited and settled in Australia 600 years ago — centuries before Captain Cook set foot Down Under.

And while some experts labelled the find a hoax, The Sunday Times can today reveal that a leading metallurgist has tested the statue and says it was buried in the sand where it was found for at least a century and not planted there more recently, making it a legitimate discovery.

That’s the stunning assessment by Dr Ian MacLeod, a fellow of the Western Australian Museum and a corrosion expert who has given evidence on firearm corrosion at a murder trial and identified fake museum artefacts in Hong Kong.

The intriguing tale began late last year when two mates, filmmakers and adventurers said they found the statue, which dates back to the Ming Dynasty in the early 1400s, while scouring an undisclosed remote beach in WA’s Gascoyne region with metal detectors.

Leon Deschamps, a historian and photographer from Shark Bay who has previously worked with film crews for Sir David Attenborough’s Blue Planet series, captured the statue’s discovery and unearthing with his Finn Films co-director and partner, Shayne Thomson.

The men were using metal detectors in an attempt to discover evidence and artefacts from the early 1800s French exploration of Australia as they gathered footage for a documentary on the subject.

They’d mostly found old beer cans, but then stumbled on something far more ancient — a small Buddha, measuring less than 25cm but weighing a hefty 1kg despite its small size, buried about 15cm down.

Experts said the statue appeared to be from the 1400s, which means it was made before the arrival of Captain Cook in Botany Bay and early explorers Willem Janszoon and Dirk Hartog’s arrival in WA.

The pair wondered if it had arrived in Australia during the Ming Dynasty, proving a theory that so-called Chinese “treasure fleets” had landed on the WA coast centuries before Europeans.

Or was it part of a horde of buried treasure belonging to “Black Bill Dampier”, a buccaneer known to have sailed the WA coast? Or had it somehow come to be buried in the dunes more recently?

“We brushed the sand away and had a giggle. We thought it might have been a 1950s art deco candelabra or something,” Mr Deschamps said.

“But in another minute of digging we turned up a baby Buddha. We had no idea what a geopolitical hot potato it would be.”

At the time, Sydney University China expert Xiaohuan Zhao said the baby Buddha appeared to be early Ming Dynasty and could date to the reign of either the Yongle emperor, from 1402-24, or the Xuande emperor, 1425-35, but it most likely came to Australia post-Ming Dynasty.

Notre Dame University archaeology and history lecturer Shane Burke said any claim that a statue was brought from China to Australia in the Ming Dynasty “should set off alarm bells”.

And a former curator at Melbourne’s Chinese Australian History museum, Paul Macgregor, said that even if the discovery was genuine it would not prove the Ming-era treasure fleets theory.

“They could have bought something like that from an antique market or on a website,” he said, while suggesting 19th-century copies of Ming-style statues could also have been brought by Chinese pearlers in the late 1800s or early 1900s.

But now the tale of buried treasure has taken a new twist, after Dr MacLeod, who was executive director at the WA Museum for 38 years and has published 240 papers on corrosion science, examined the statue and said he staked his reputation on its discovery being authentic.

“Was it consistent with an archaeological discovery in the Shark Bay area? The answer is yes. I’ve spent 40 years looking at corrosion and I know bullshit when I see it, and this was not bullshit,” Dr McLeod said, adding the Buddha was gilded with gold and made with impeccable craftsmanship.

“You can tell it’s been buried for a long time from the corrosion patterns and the nature of the corrosion on it. You physically cannot, even if you’re a very clever chemist, falsify that natural combination of micro differences in the surface patina.”

But while the statue is “undoubtedly old”, he estimated it had only been buried for between 100 and 150 years in the dunes, meaning it does not fit with the timeline of the Ming Dynasty treasure fleets, which were said to have been funded by wealthy and elite families and sent out to explore the world for minerals centuries earlier.

Claims the treasure fleet crews reached WA, Queensland, New South Wales and the Northern Territory and built small villages and associated with Aboriginal people are mostly dismissed by historians, but the theory was revived in 2003 when former Chinese president Hu Jintao claimed in an address in the Australian Parliament that expeditionary Ming Dynasty Chinese fleets travelled to Australia in the early 15th century.

“For centuries, the Chinese sailed across vast seas and settled down in what was called ‘the southern land’, or today’s Australia,” Mr Hu said in Canberra.

But Dr MacLeod said, based on his assessment of the Buddha being buried for just 100-150 years, the answer to the mystery was likely to be found in more recent history and he agreed with Mr Macgregor’s theory of Chinese pearlers bringing it to WA.

“I think it’s very likely that the statue had belonged to the ship’s captain of a Chinese junk, down from mainland China doing pearl diving or pearl fishing, and it was somehow dropped,” Dr MacLeod said.

“It hasn’t been there from the time of manufacture. It’s something that was old, that arrived, it got lost, got buried and then it got found.”

Mr Deschamps said the results of Dr McLeod’s testing busted any claims that he and Mr Thomson planted the Buddha, and now the pair will continue their quest to solve the mystery of the buried Buddha in a documentary they have decided to produce.

“We’re filming everything we do as we are now planning on making the discovery into a new show called Aussie Metal Detectives,” Mr Deschamps said.

“Another theory is it may even be part of a high-status Chinese burial, so we are working on having a professional archaeological dig performed at the site soon to see if other non-metallic objects, like a coffin, skeleton or clay burial urn, may lay further below,” he said.

Regardless of whether the statue was pirate treasure, a burial artefact, proof of Chinese occupation centuries before Europeans arrived in Australia, or just an object somehow dropped over the side of a pearling vessel, Mr Deschamps said its real value was in the questions it has created.

“The truth is we may never know the answer to the mystery of how it came to be there. But that’s the cool thing about the Buddha — it makes us start asking questions,” he said.

“The real treasure is not the object itself, it’s trying to find out what the story is.”