You are here: Home » Articles filed under: 'News' » Article: 'Icons at The Powerhouse'

Icons at The Powerhouse 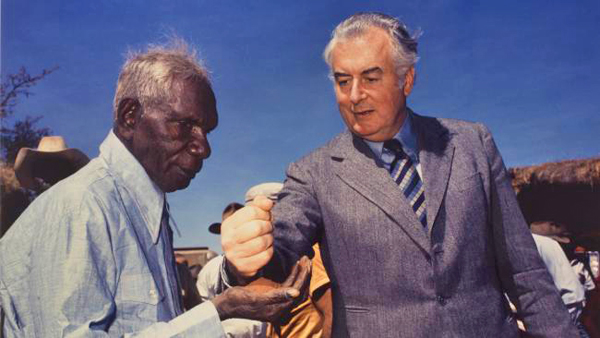 It certainly takes gumption to ask a prime minister and a traditional landowner to re-enact an official ceremony just to get a better photograph, but that is exactly what photojournalist Mervyn Bishop did on 16 August 1975.

Bishop was present for the moment when prime minister Gough Whitlam handed back the land rights to Gurindji elder Vincent Lingiari at Dagaragu (Wattie Creek) in the Northern Territory. To symbolise this historic act, Whitlam poured soil into Lingiari’s cupped hand.

Initially the ceremony took place in the shade of a nearby shed but Bishop, who was working as a photographer for the Department of Aboriginal Affairs, wasn’t happy with the photos he had taken. As soon as the formalities were over, he approached Whitlam and Lingiari and asked if they would re-enact the pouring of the soil, but this time outside in the sunlight.

Bishop’s resultant photograph is considered pioneering. The deep blue sky and the red desert provide an evocative backdrop and the two men exude a sense of dignity. Furthermore, the sense of immediacy and the dynamism of the composition add to the impact of this image that celebrates a key moment of Australian history.

Bishop’s photograph is so iconic it has been included in an exhibition, Icons, at Sydney’s Powerhouse Museum. Moreover, the exhibition’s curator, Jacqui Strecker, says it is her favourite icon in the show.

As Strecker and I stand before the photograph, she says the angle Bishop has chosen to depict the scene is very interesting.

“We are getting this incredible sense of the two towering figures, particularly the monumentality of Gough Whitlam,” she says.

“But it is very interesting with Vincent Lingiari because someone is holding the paper under the sand in a very deliberate way and capturing that. And we see the detail of Lingiari’s pants, which are stitched up, and you do have this interesting juxtaposition between white power and indigenous rights at that particular point in time. I think some of this detail is very telling in that regard.”

Bishop’s backstory is also interesting. Born in 1945 in Brewarrina in northwestern NSW, he grew up with photographs around the house because his mother was a keen amateur photographer.

In 1963, he came to Sydney and took up a cadetship with The Sydney Morning Herald, the only Aborigine to be employed as a cadet photographer. In 1971 he was named Australian news photographer of the year for Life and death dash, depicting a nun clutching a boy outside St Margaret’s Hospital in Sydney.

Bishop has said that working in newspapers encouraged him to work hard for the picture he wanted, rather than take the attitude of “that will do, click”. It is a diligent approach that has helped facilitate his insightful accomplishments with the camera.

Strecker says Whitlam pouring soil into the hands of Lingiari is one of those images that has been reproduced so much recently, particularly with the anniversary of the Gurindji handback ceremony, but for her, popular appeal is an important component of what makes an icon.

“This image does have an aura of greatness or a special spiritual power that draws me,” she says. “When I give my curatorial talk on the exhibition I say this is my favourite work in the whole show. I think what is captured here is incredibly poignant in that much deeper indigenous engagement and move toward reconciliation.”

More than 50 years of Bishop’s photography also is highlighted in an exhibition, Mervyn Bishop, until October 8 at the Art Gallery of NSW in Sydney.