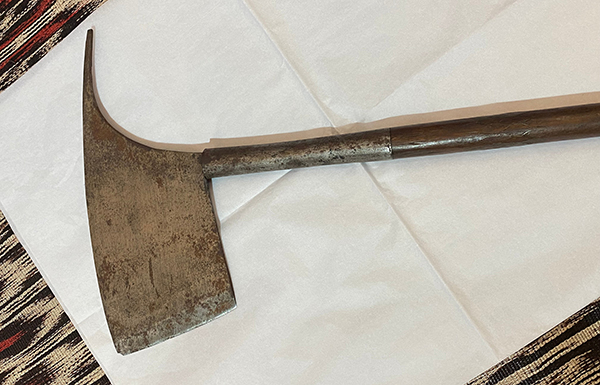 Editor’s note: Images of the seized axe and restitution ceremony are available via hightail

A steel and wood axe from the early- to mid-1900s that was seized under Australian legislation was returned to the Philippines Government last week (Friday, 19 November 2021).

It has made ongoing international enquiries into a US-based online vendor selling cultural heritage objects found to be illegally removed.

INTERPOL Canberra joined the Office for the Arts (OFTA), Department of Infrastructure, Transport, Regional Development and Communications, the Department of Foreign Affairs and Trade (DFAT), and the Australian Border Force (ABF) to return the axe to the Philippines in a restitution ceremony in Canberra. It follows two other restitution ceremonies in Australia in the past year in which illegally trafficked cultural items were returned to the governments of Mexico and Peru.

The ABF intercepted the item at the border in June 2020 after an Australian customer purchased it from the US-based vendor of interest. The ABF referred the matter to the OFTA for advice for possible contravention of the Protection of Movable Cultural Heritage Act 1986.

The OFTA consulted with Australian experts who assessed the axe to be authentic. The Government of the Philippines requested restitution of the object in January 2021, asserting that the object was protected under its cultural property laws.

The axe was returned to the Ambassador of the Philippines to Australia, Her Excellency, Ms Hellen Barber de la Vega, at a formal restitution ceremony last week. The Office for the Arts returned the axe at the ceremony and was joined by representatives from INTERPOL Canberra, ABF and DFAT.

The US-based vendor who sold the axe was first detected during Operation Athena II, a global customs-police operation spanning 103 countries, which included INTERPOL Canberra, focussed on disrupting the illicit trafficking of cultural heritage.

Globally, more than 19,000 archaeological artefacts and other artworks have been recovered during Operation Athena II and more than 100 people have been arrested.

Enquiries into the US-based vendor who sold the axe continue with US law enforcement partners.

“INTERPOL Canberra has been working closely with our partners in Australia and around the world to retrieve and return property illegally removed from their country of origin before they reach private collections and disappear from view,” a/Assistant Commissioner Phelan said.

“Thanks to the efforts of ABF officers at the border, this item was detected and referred to the Office for the Arts. We will continue to work closely with stakeholders to combat this type of cultural theft,” Group Manager Holben said.

The axe was the sixth item sold by the US-based vendor to an Australian customer that has been intercepted and returned to a foreign government in the past 12 months.

On 4 November 2021, a rare Incan wood carved vessel depicting mating llamas, dating from the Late Horizon period of the Incan Empire (1440–1532) was returned to the Government of Peru.

The process of investigating and returning stolen or illicitly exported objects can take some time, and will often involve the AFP’s INTERPOL Canberra, OFTA, ABF and DFAT.

More information on Australia’s laws referring to the import and export of cultural heritage can be found on the Office for the Arts website.

You can download ID-Art free of charge for Apple and Android mobile devices.