You are here: Home » Articles filed under: 'Current Issues' » Article: 'Immunity From Seizure'

* UPDATE: CAMD has welcomed the passage of the Commonwealth Protection of Cultural Objects on Loan Act 2013 which was assented to on 14 March 2013 *

CAMD is keen to ensure that domestic audiences continue to have the opportunity to see significant cultural material from around the world and also material originating from Australia and New Zealand which now resides overseas.  To this end, CAMD has worked closely with the Council of Australian Art Museum Directors (CAAMD) to encourage the development of immunity from seizure for cultural objects on loan legislation.

The current lack of legislation and/or legal assurances has made it increasingly difficult in recent years to organise the loan of items from international museums.

A lack of action on this issue could result in Australia and New Zealand becoming unattractive destinations for loans, both for exhibitions and research purposes.

CAMD strongly supports the development of national statutory schemes which encourage due diligence on the part of the borrower but delegates authority to accept loans to Government-funded collecting institutions which have been approved and accredited for this purpose.

It should be noted that CAMD supports the return of illegally acquired cultural property and the upholding of relevant international conventions to which Australia and New Zealand are a signatory but believes that these goals would not be circumvented by an immunity from seizure scheme.

CAMD welcomed the introduction of a bill to the Federal Government Parliament in 2012 to address this issue.  See: Media Release – Immunity legislation Dec 2012

The Protection of Cultural Objects on Loan Act 2013 was assented to on 14 March.

The New Zealand Ministry for Culture and Heritage (MCH) has recently released a discussion paper on the development of an Immunity from Seizure for Cultural Objects on Loan policy.  See http://www.mch.govt.nz/immunity-seizure 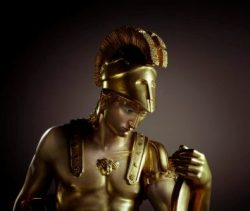 Alexander the Great (detail) by Erwin Olaf. From the exhibition, Alexander the Great: 2000 years of treasures, 24 November 2012 to 28 April 2013. Australian Museum.
Positions Vacant » View All
» Team Leader, First Peoples Art & Culture – TMAG
» Booking Services & Rostering Officer – SLM
Latest News » View All
AWM Council elects Kim Beazley AC as new Chair
bringing 'impeccable record of public service' Read more.
Dion Pieta director appt to grow Te Ao Māori
perspectives & business at Univ of Auckland Read more.
Apollo awards 2022 shortlists announced
- awards ceremony in London 6-December Read more.
Egyptian archaeologists discover new Queen
tomb of a previously unknown queen Read more.
Ötzi Iceman narrative revisited & rewritten
- spring death & ice movement? Read more.
Top +
Council of Australasian Museum Directors c/o Mr Brian Oldman, South Australian Museum PO Box 234 Adelaide, South Australia 5001 Australia, © CAMD 2022
Copyright: All information and resources provided on this website remain the copyright of the Council of Australasian Museum Directors. Permission is granted for viewing and downloading for personal and not for profit purposes. Those wishing to reproduce any materials for commercial, educational or other uses are requested to contact us.
Disclaimer: The content of this website is provided for information purposes only and is not intended as a substitute for professional advice. No claim is made as to the accuracy or authenticity of the content of the website. The Council of Australasian Museum Directors does not accept any liability to any person for the information or advice (or the use of such information or advice) which is provided on this website. The information on our website is provided on the basis that all persons accessing the site undertake responsibility for assessing the relevance and accuracy of its content. No responsibility is taken for any information or services which may appear on any linked web sites. Hostgator.
.