You are here: Home » Articles filed under: 'News' » Article: 'Implementing the SDG’s in Australia'

Implementing the SDG’s in Australia

June 25th, 2020 | Browse other: News. | Tagged with: No One Left Behind: Implementing the Sustainable Development Goals in Australia, Sustainable development |

No One Left Behind: Implementing the Sustainable Development Goals in Australia, Whitlam Institute, 17 June 2020

An Investigation of International Best Practice in SDG Governance Structures, Policy and Planning. 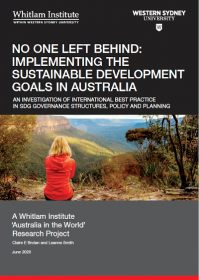 Australia was one of 193 countries that came together at the high-level United Nations (UN) Sustainable Development Summit in New York in September 2015 to commit to achieve the 2030 Agenda for Sustainable Development and its 17 Sustainable Development Goals (SDGs). The SDGs are a universal agenda, and their implementation is the shared responsibility of all countries at all stages of development, including OECD nations like Australia. Following a 2018 parliamentary inquiry into Australia’s SDG implementation, the Morrison Government and the Department of Prime Minister and Cabinet (PMAC) will require up-to-date knowledge on international best practice in governance, policy and planning for SDG implementation to inform its response to the 18 recommendations issued by the Australian Senate’s Foreign Affairs and Trade References Committee in February 2019.

It is critical that the Australian Government takes leadership in the implementation of the SDGs in part because of the political and constitutional peculiarities of Australia’s federal system of government. Only the Commonwealth has the capacity and authority to coordinate the various State and Territory jurisdictions and Local Government bodies. Why has the Australian Government been so slow to take up its responsibilities to implement the SDGs, despite the parliamentary inquiry that gave clear guidance on how to do so? This report builds on one of the parliament’s recommendations – that Australia look to international best practice to improve its own efforts to work toward a sustainable future for Australia – by analysing best practice around the world and offering tools for Australian government to take charge of SDG implementation in this country. The new National Cabinet and National Federation Reform Council are exactly the kind of mechanisms needed to effectively implement the SDGs and make sure no Australians are left behind.

“Sustainable development in the 21st century is not something which happens to somebody else, somewhere else. We all have a stake in it – and every country has work to do to progress towards it.”