You are here: Home » Articles filed under: 'News' » Article: 'In My Blood it Runs'

In My Blood it Runs 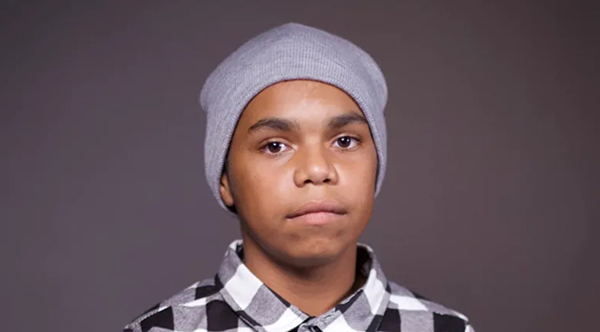 Dujuan Hoosan, 12, is a multilingual hunter and healer from the Northern Territory in Australia. His life is explored in a new documentary, In My Blood It Runs, which premieres in Toronto on Friday at the Hot Docs festival. (Andrew Nguyen/CBC).

Sheena Goodyear, Why this bright Indigenous boy who speaks 3 languages almost failed out of school in Australia, CBC Radio, 27 April 2019

When it comes to learning about his people’s culture and history, Dujuan Hoosan is a star pupil.

A bright and confident 12-year-old boy of Arrernte and Garrwa descent, Dujuan is a skilled hunter, fluent in three languages and considered a healer by his people — a gift he inherited from his grandfather.

But in Australia’s education system, he’s been a struggling student who skips class, gets into trouble and fails his exams.

Now his story is at the centre of the documentary In My Blood It Runs, which explores how colonial school curriculums fail Indigenous children.

“I just felt like this was such an injustice, in a way, and it’s not surprising, because kids are measured by Western values and only taught in English, which is how I understand is quite similar in Canada,” director Maya Newell said.

“He’s the most witty, intelligent, you know, funny young kid and I was like, I think he has some lessons for Australia and for the world.”

Dujuan, along with Newell and his parents, joined As It Happens host Carol Off in-studio on Thursday to discuss the film, their struggles with the school system and his hopes for the future.

‘Some books are made up’

Dujuan’s mother, Megan Hoosan, wanted her son to get a Western education as well as an Aboriginal one so he would have better employment prospects when he grows up.

But when he started attending school in Alice Springs — a remote desert town in  Australia’s Northern Territory — he immediately knew he didn’t fit in.

“When I first went to that school on my first day, there were only a little bit of Aboriginal teachers. Most of them was just white people and I couldn’t deal with it too much,” he said. “I had to try to get out of class.” 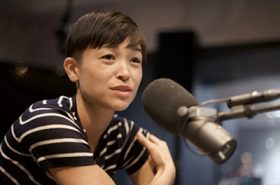 Maya Newell directed the new documentary In My Blood It Runs. (Andrew Nguyen/CBC)

The lessons were even worse, he said.

His teachers regaled him with supposed fictions that he knew to be fact, and soberly explained facts he dismisses as fiction.

In once scene of the documentary, Dujuan’s teacher opens a history book and declares: “This isn’t a story. This is information, or non-fiction. It’s fact. It’s the history of our country.”

She goes on to tell the students about Capt. James Cook, the British explorer and cartographer who made the first recorded European contact with the eastern coastline of Australia.

She describes Cook as a “great sailor” who planted his flag on Australian soil and “claimed for the English country the whole of this new land.”

But Dujuan knew there was nothing “new” about the land on which his ancestors had lived for generations, and nothing “great” about the man whose arrival heralded the colonization of his home and his people.

He raised his hand to voice his concerns, but the teacher never called on him.

“I think the story was a lie,” Dujuan said. “Some books are made up.”

‘The Spirit is real’

In another scene, a teacher reads from a different book. This one, she explained, is fiction.

“For a long time there was nothing,” she read. “Then, in the mind of the Spirt of Life, a Dreaming began.”

For Dujuan, there’s nothing fictional about this tale. It is a creation story that is central to Aboriginal belief systems in Australia. 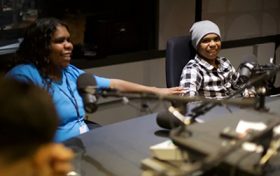 Dujuan, right, and his mother Megan Hoosan join As It Happens for an in-studio interview. (Andrew Nguyen/CBC)

His teacher, however, sounded incredulous as she read, remarking at one point, “So they’re actually saying there’s a spirit. I’m not sure how that works, but there’s a spirit somewhere.”

This time, Dujuan didn’t wait to be called on. Instead, he blurted out: “The spirit is real!”

If she had, he says he would have told her about the Spirit in the land.

“The Spirit is somewhere in Australia,” he said. “But now we can’t find it.”

While Dujuan was struggling with school, he was also getting into trouble — skipping class, running away from home and spending his time on the streets with other boys.

At the same time, news was breaking about disturbing footage showing the torture of Aboriginal teenagers at the Don Dale youth detention centre in Australia.

Some inmates in the facility are as young as 10 — the same age as Dujuan in the film.

“These were horrendous images and it shocked the whole nation,” Newell said. “And in Alice Springs, kids and families were watching that footage on their TV and that was their family members in there.”

Whenever Dujuan was missing, his mother was terrified that he would fall in with the wrong crowd, get in trouble with the law and end up in a place like Don Dale .

Dujuan, who saw the grisly footage on the news, feared the same.

“Once when I ran away from school, we went into town. Some policemen were chasing us and they caught us,” he said.

The officers threatened to take them to jail, he said. But he got lucky, and they took him home to his mother instead.

Other kids his age aren’t so fortunate.

In 2018, Australia’s government revealed that 100 percent of kids in juvenile detention in Northern Australia were Aboriginal.

In November 2017, a royal commission found “shocking and systemic failures” at Don Dale and recommended it be immediately closed.

It’s still up and running today.

Back on the land

Eventually, it all became too much for Dujuan’s mom. He’d been expelled from school and she feared for him constantly.

“He just kept doing what he wanted to do and he didn’t know that he was making his mother worried,” she said.

So she sent Dujuan to live with his father, James Mawson, in a small community at the tip of the Northern Territory, where he can still pursue an education, but also live off the land.

“As Dujuan’s father [I want] to be his role model in his teen years, so hopefully he’ll pick a different route than the one he was on in Alice,” Mawson said. 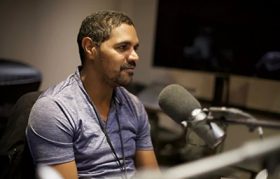 James Mawson hopes to be a role model for his son during his teenage years. (Andrew Nguyen/CBC)

Dujuan has big dreams for his future too.

He wants to meet the prime minister and convince him to craft policy that tackles the overrepresentation of Aboriginal people in Australia’s child welfare and criminal justice systems.

And he hopes his appearance in In My Blood It Runs is an inspiration to other kids like him.

“I want Aboriginal people to have hope and strength from my film,” he said.

In My Blood It Runs premieres Friday at the Hot Docs festival in Toronto.

In My Blood it Runs, Sydney Film Festival, June 2019 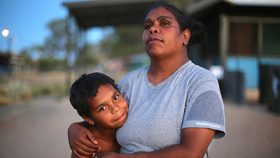 Directed by Maya Newell
2019, Australia, 85 minutes
Unclassified 15+
BOOK TICKETS
Save up to $7/ticket by purchasing a Flexipass!
A rare insight into the world of 10-year old Dujuan, an Arrernte/Garrwa boy living in Alice Springs who is a child-healer, speaks three languages yet is ‘failing’ in school.

As he faces increasing scrutiny from welfare and police, his family battle to keep him safe, grounded in language, culture and identity – the only solution they know works.