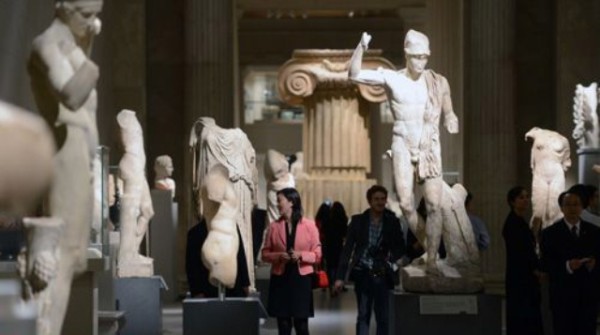 It’s now easier for mainland Chinese to visit the United States, thanks to relaxed visa rules instituted late last year, allowing 10 years before visa renewal rather than one year. The change is expected to increase Chinese tourism and real estate investment, but it will also have a less obvious beneficiary: American museums.

According to the Los Angeles Tourism and Convention Board, China was the city’s biggest driver of overseas visits in 2014, with an increase of more than 20 percent over the previous year; it was the third straight year China was the top source of overseas tourists. More than 740,000 Chinese visited New York last year, almost five times as many as in 2009.

These tourists spend, on average, $7,200 per visit per person, including travel and lodging, according to the U.S. Travel Association. While a big part of the money goes toward shopping — indulged in by 85 percent of Chinese tourists — art museums and galleries are also high on many visitors’ lists, with 36 percent choosing them in 2013, according to the association.

Fred Dixon, chief executive of NYC & Company, New York’s tourism marketing organization, said “icons” lure Chinese visitors — especially the Metropolitan Museum of Art. “They like the status,” he said. “The heritage and history are real draws for them as well.”

Museums of all sizes and types across the United States are trying to cater to the Chinese. The efforts include audio tours and maps in Mandarin; acceptance of UnionPay, a Chinese credit card; and promotion on Weibo, a Chinese social media platform.

Not surprisingly, the Met has been at the forefront of these activities, responding to the steep rise in Chinese visitors. In the museum’s last fiscal year, ended on June 30, Chinese for the first time became the largest segment of its foreign visitors; the number more than quadrupled over five years, from 50,000 in fiscal year 2009, to 209,000 in fiscal year 2014.