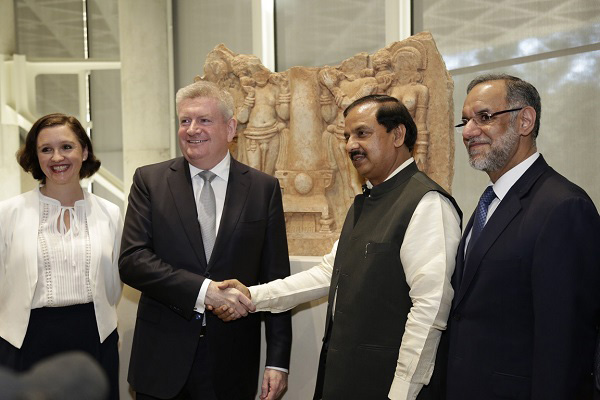 In a special event at the National Gallery of Australia (NGA), Senator Fifield formally handed over the three ancient statues, The Seated Buddha, Goddess Pratyangira and Worshippers of the Buddha. Source: The Australian.

When Arts Minister Mitch Fifield yesterday handed to his Indian counterpart, Mahesh Sharma, a 900-year-old stone sculpture of the goddess Pratyangira, the so-called “lion lady” of Hindu mythology began her journey home to India. Her international odyssey was finally over, 14 years after she was removed from her nook in the wall of Virddhagireesvarar temple in southern India.

It is unclear when in 2002 the lion lady was stolen; her loss was never reported to local police. But unlike another antiquity stolen from Virddhagireesvarar that year and sold to Australia, the Ardhanari bought by Sydney’s Art Gallery of NSW in 2004, the lion lady was not replaced with a replica. For 10 years she has sat as one of the jewels of the Indian collection at the National Gallery of Australia in Canberra.

Standing 1.25m tall and hewed from dark granite, she boasts a stylised lion’s face, pert bosoms, strong legs, two intact arms and two arms that appear to have been knocked off. She is considered to be in good condition given her age, which would have been why the NGA paid a handsome $328,500 for her. In India she was part of a set of Hindu gods specific to her temple and crafted during the great Chola era, a 400-year flowering from 900 to 1300 of immense economic, military and cultural pre-eminence in Southern India. In her new home in Canberra, the lion lady was displayed in a manner considered nonsensical to people of the Hindu faith: she sat in a secular art gallery interspersed with baubles from across the subcontinent.

There was a 200-year-old ivory Christ without his crucifix, possibly from Goa; a head of a Bod­hisattva from Gandhara, in what is now part of Afghanistan and Pakistan, in the third century; and a 150-year-old brass processional standard from Hyderabad, India. Some of the antiquities were the best of their kind, such as the $5.6 million, 900-year-old Hindu Dancing Shiva that was returned to India by then prime minister Tony Abbott in 2014 after India requested its return on the grounds it had been illegally exported and the NGA was unable to prove otherwise.

The AGNSW Ardhanari, bought for $300,000, also was returned during this visit. Returns have since been made by Germany, France and museums in the US.