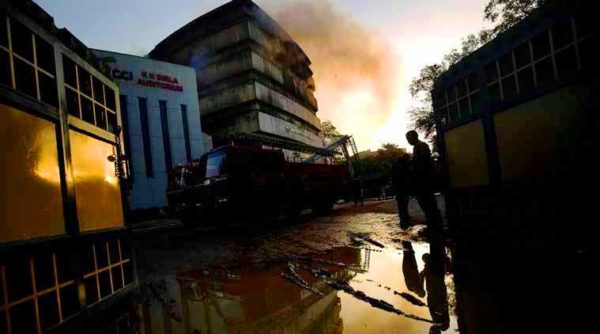 Smoke pours from a building of the National Museum of Natural History in New Delhi. Source: Express Photo.

Ruchira Ghose, Our ailing museums, The Indian Express, 4 May 2016

The fire at the National Museum of Natural History points to the need for a thorough overhaul of the fundamental structure of the public museum. Autonomy is key.

The National Museum of Natural History is a popular museum, especially for schoolchildren. The fire that broke out in the early hours of April 26, spread to five of the six floors that the museum occupies, and large parts of its collections were destroyed. As the Union environment minister observed, “The museum is a national treasure. The loss cannot be quantified.” One shudders to think of the dimensions of the tragedy if the fire had broken out during working hours. It takes a disaster of this devastating scale for the concerned ministry — of environment, forests and climate change — to take note and initiate a review of fire safety at the 34 museums under its charge.

But what of all the other public museums in the country, which come under a variety of ministries? One can safely assume that most of our public museums would perform miserably in a fire audit. And what of all the other disasters happening and waiting to happen? Like fire, water leakages and flooding can wreak enormous and immediate damage, to museum collections and the public. Inappropriate sewage and drainage systems, unhygienic and offensive garbage disposal arrangements, including heaps of junk and malba that are left to lie around for months and years, mosquito-infested environments, all pose health and safety hazards in government museums. But what of wrong storage, handling and display, the dust, the humidity, the insects, the incomplete accessioning of invaluable objects, theft, which also plague our public museums and that slowly, often not so slowly, destroy the treasures held in the collections?