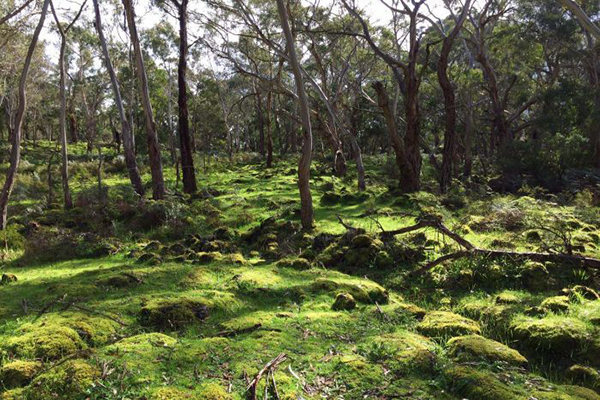 The remains of stone traps used to capture eels at Budj Bim have been added to the UNESCO World Heritage List. ABC News: Bridget Brennan.

A south-west Victorian Indigenous site that is older than the pyramids has been added to the UNESCO World Heritage List.

After more than a decade of hard work and lobbying, the Budj Bim Cultural Landscape near Portland was accepted onto the list at a meeting in Baku, Azerbaijan on the weekend.

The site was created about 6,600 years ago by the Gunditjmara people, who used stones to build an elaborate series of channels and pools to harvest eels from Lake Condah.

There is also evidence at the site of stone dwellings, and trees that may have been used to smoke or preserve the eels that were caught.

Not only does Budj Bim bust the myth that all Indigenous people were nomadic and not agriculturally inclined, it is also considered one of the oldest aquaculture sites in the world.

A long and valuable journey

Denis Rose, project manager for Gunditj Mirring Traditional Owners Aboriginal Corporation, said it had been a long journey to UNESCO recognition, but a valuable one.

“We based it on a lot of evidence, and now that it’s been decided, I’m extremely happy.” 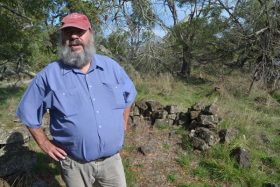 Denis Rose in front of one of the remnants of small stone houses the Gunditjmara people lived in at Budj Bim prior to European settlement. ABC News: Steph Juleff.

He said the listing had three main benefits — recognition of Gunditjmara achievements on a global scale, increased protection for the site, and the potential tourism boost.

“There are a number of reports that say that once a place is declared as a world heritage site, tourism increases dramatically,” Mr Rose said.

The State Government has announced $8 million for a visitor centre and major works at the site to ready it for an expected visitor influx. 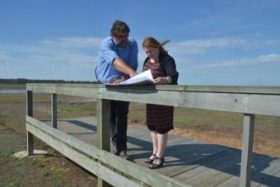 “It means people get the opportunity to come out here and see what we get to see every day of the week,” Cr Rank said.

“The tourism thing is really important but there are also other important cultural and historical elements to this announcement.

Elevation to the World Heritage List means the site is recognised as having “outstanding universal value”.

Australia has 19 locations on the list, ranging from natural wonders such as the Great Barrier Reef and fossil mammal sites at Riversleigh and Naracoorte, to cultural landmarks such as the Sydney Opera House and Melbourne’s Royal Exhibition Building and Carlton Gardens.

Mr Rose said he was delighted to think something the Indigenous people of south-west Victoria built now appeared on the same list as the pyramids, Stonehenge and the Acropolis.

“I think what it really does is it’s … an important acknowledgement of the work that our Gunditjmara ancestors have done,” he said.

“When I take people out to country I tell them this aquaculture system was first built 6,600 years ago — there’s not many things on the planet that still exist today that are older than that.”