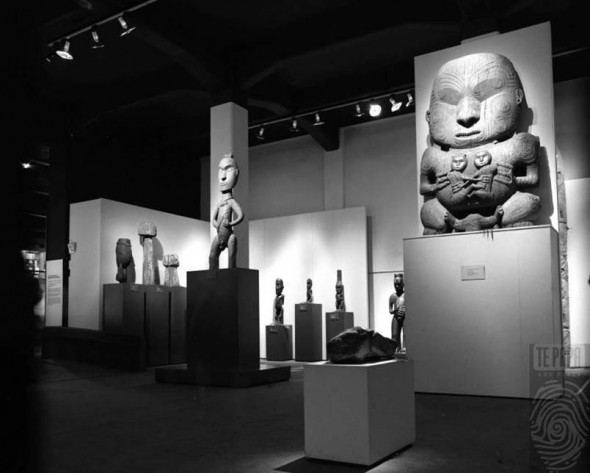 I am blogging a paper, as below, written in response to an invitation to talk about Indigenious art curatorial practice for the recent Pacific Art Association XII International Symposium. The symposium was held in Auckland during the week of 14 – 17 March 2016 and in a number of venues across the city including Orakei Marae, Auckland Museum, Auckland University of Technology and Toi o Tamaki, the Auckland Art Gallery. The paper (as below) was delivered on the 15 March, 2016 at the Auckland University of Technology. It was 15 minute paper and panel discussion that featured three speakers – two Pacific art curators; Ioana Gordon-Smith and Leuli Eshraghi, and myself and was moderated by Pacific Art Historian Dr Caroline Vercoe.

Te Maori was the first exhibition of taonga whakairo to have left New Zealand with the approval of Iwi communities. The exhibition which opened at the Metropolitan Museum of Art in New York in 1984, was a turning point for Maori art and created a paradigm shift in the way that Maori art was valued and viewed in New Zealand and radically transformed museum and art gallery practice here.

The exhibition, Dr Hirini Moko Mead said, launched Maori art into the consciousness of the art world, took Maori art out of ‘obscurity’ and redefined it as ‘a great art that could take its place alongside other great art traditions’, [1] It also opened the way for the recognition of contemporary Maori art within the art mainstream, 30 years after the first attempts at acceptance from a small group of post-war Maori artists. Maori artists who are now acknowledged as the pioneers of the contemporary Maori art movement and often now referred to as the Maori modernists.

In the late 1980s following Te Maori, New Zealand art galleries began collecting contemporary Maori art seriously and contemporary Maori art became viewed as an important and distinctive strand of New Zealand art history.  Development continued in the 1990’s with the advent of biculturalism and with the graduation of a new generation of artists from art schools dubbed by the late Maori Art Historian Jonathan Mane Wheoki as the ‘young guns’ or the ‘Maori internationals’ with currency both nationally and globally. There is now a third and developing fourth and maybe even fifth generation of contemporary Maori artists.  The 2000s saw the rise of contemporary Indigenous art globally, with new communication technologies, social media and cheaper and more accessible international travel ‘creating art worlds everywhere to connect more closely’, as Australian art historian Terry Smith contends in his book Contemporary Art: World Currents.[2]

There have been no focused strategies, no foundational initiatives, no convergence of influence or  development of critical mass created by the sector to provide contemporary Maori art curators with opportunities to evolve our curatorial practice further. Most of the expansion of contemporary Maori art curatorial practice I would submit has been self-seeded and created by the art curators themselves.