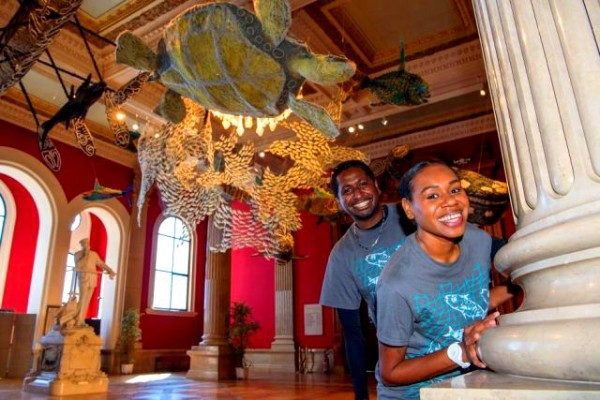 A new display showcasing the talents of 50 Aboriginal and Torres Strait Islander artists has opened at a museum in Monaco.

The Australia: Defending the Oceans, At The Heart of Aboriginal and Torres Strait Island Art display is part of the larger Taba Naba — Australia, Oceania, Arts of the Sea People exhibition at the Oceanographic Museum of Monaco.

Stephane Jacob, project manager of the exhibition, expects around 600,000 visitors to the exhibit, which will run until the end of September.

“It’s a fantastic opportunity for Australian Indigenous people from the northern part of Australia to actually give voice to the world about what’s happening there and their way of expression,” he said.

“All the artists involved have been very surprised by the dimension of the place.”

The display contains six projects across three floors, both inside and outside of the museum, including a stencil floor installation on the roof of the museum.

The rooftop stencil called Turtle Mating and Nesting Season will cover 670 square metres of the roof of the Oceanographic Museum of Monaco and is one of the largest works ever made by a Torres Strait Islander artist.