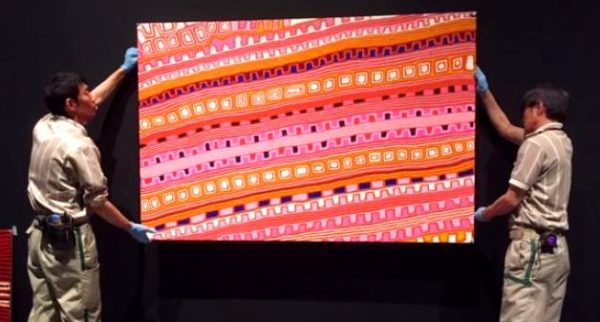 An exhibition of Australian Indigenous artworks has opened in the Japanese city of Osaka.

The collection of 35 paintings from the National Museum of Australia’s Canning Stock Route collection will then travel to other galleries around Japan over the next 12 months.

Dr Matthew Trinca, the director of the National Museum of Australia, travelled to Japan for last week’s opening.

“The origins of this exhibition date back to 2006 when an arts agency in Western Australia established with nine Aboriginal communities, a major project looking at the Indigenous histories of the Canning Stock Route,” he said.

Dr Trinca said a major exhibition of the artworks was shown in Australia in 2010-11.

He said the Japanese have demonstrated a keen interest in Australian Indigenous art.

“In 2008, we brought a major exhibition of Emily Kame Kngwarreye’s works here to Japan. We were astonished at the reception, it was extraordinary how Japanese audiences responded to these works,” he said.

The exhibition will travel from Osaka to the Japanese cities of Takamatsu, Tokyo and Kushiro in Hokkaido over the next year.

Dr Trinca said he hopes Japanese audiences will get an understanding of Australian Indigenous heritage and culture from the works.

“I hope they’re taken into a sense of contemporary Australia, contemporary Indigenous Australia but also have some feeling for the land itself,” he said.