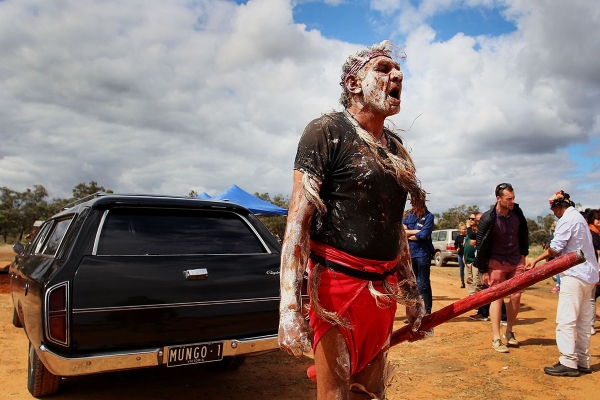 David Edwards, a Mutthi Mutthi elder, welcomes the return of remains that had been taken long ago. Credit: Lisa Maree Williams/Getty.

Local communities and geneticists are working together to sequence DNA from remains that were taken from their homelands decades ago.

Several years ago, Gudju Gudju Fourmile welcomed back several members of his Yidinji community who had been taken from their homes in northern Australia almost a century ago. Like many other Indigenous communities in Australia, the Yidinji have worked for decades to bring the bodies of their ancestors home — which Aboriginal communities describe as returning to Country.

Many of the ancestors are off Country as a result of the dehumanizing practices of the nineteenth and early twentieth centuries, when it was common for white collectors to loot graves and sell the remains of Aboriginal people to museums in Australia, the United Kingdom, and other countries. “When our remains are off Country, we try to make sure they come back,” says Fourmile, an elder in the community who lives in Cairns. “They need to be comfortable. That’s a big thing for many tribal groups.” And when his community finally reburied its ancestors in 2014, “everybody was so happy. And the Country felt good again,” Fourmile says.

Before the Yidinji elders laid their ancestors to rest, they received a request from scientists who had been analysing the DNA of living community members: could they sequence the ancestors’ genomes, too? With permission granted, a team led by evolutionary geneticist David Lambert at Griffith University in Brisbane extracted DNA from the remains of one individual, and confirmed that the ancient person was closely related to Yidinji people alive today1,2. “When you find something out like that, you jump for joy,” says Fourmile. The event also marked a turning point in the mindset of the community, he says, when members started to realize the potential of DNA analysis to help bring their people back home.

In the past 30 years or so, museums have responded to complaints by repatriating thousands of human remains and sacred objects to Indigenous Australian groups such as the Yidinji. But many more — possibly thousands — lack the information necessary to return them to one of the dozens of distinct Indigenous groups in Australia. That is a source of great distress for communities. Lambert’s team published a study in 2018 showing that ten remains, including those of one ancient Yidinji individual, could be linked to specific Indigenous communities through genetics1.

Now, two teams in Australia, including Lambert’s, are partnering with Indigenous communities to create genomic maps that connect ancient and historical remains with present-day groups. Such catalogues could eventually be used to help return remains to the right communities.

Australia is one country where this approach is being trialled. DNA research is confirming that many Indigenous groups have lived on the continent for tens of thousands of years2,3. In some places, it has established that ancient individuals are closely related to present-day groups living in the same region1. Drawing such links in other regions, such as North America, has proved more difficult, because ancient populations there seem to have moved around more.

One of these projects could eventually be used by Indigenous people who are still suffering from past government actions, particularly a racist Australian policy lasting until 1970 that removed thousands of Aboriginal children from their families. These children became known as the ‘Stolen Generations’, and many of them are alive today. A DNA database of Indigenous groups could help some individuals to understand their genetic heritage and identify their homeland.

But such efforts raise concerns. As a result of the history of mistreatment, some Indigenous people fear that unscrupulous governments or scientists might misuse their genetic information. And there are tensions over who should control the data and whether scientists can freely share genomic sequences.

Fourmile says that Yidinji people agreed to the study because they had control of the data. “We’ve done a flip, and now we’re wanting them to study us for our own benefit to bring our people home,” he says.

Going back to Country

The arrival of European colonizers in Australia in the late 1780s marked the beginning of a scientific grave-robbing era there, when white people collected Indigenous human remains for research — including now-discredited ‘racial science’ theories linking intellect with anatomical differences. By the end of the nineteenth century, most major museums around the world housed Indigenous Australian remains.

The collection of such remains was part of the broader subjugation of Indigenous Australians by Europeans, which has led to generational trauma. Authorities determined where people could live and work, whom they could marry and whether they could keep their children. Tribal groups were also systematically moved off their land and placed on reserves and missions, where their movements were restricted. “They were trying to get us away from our traditional lands,” says Michael Young, a member of the adjoining Paakantyi and Parrintyi tribal groups, which stretch across a large swathe of southwestern New South Wales.

Aboriginal groups began fighting for the return of their ancestors in the 1970s, as part of a wider movement against the ongoing discrimination against them. By the 1980s, the growing pressure prompted some museums to introduce policies to return human remains and sacred objects to their communities.

Tracking down the traditional owners of ancestral remains is important for Aboriginal people because it is part of reclaiming their identities after being forced to assimilate into white Australia, says Young. “Repatriation is healing some of that wrong that has been done to us over the last 230 years,” he says.

So far, Indigenous communities have regained custodianship of more than 2,500 sets of ancestral remains from Australian museums, according to the government’s repatriation programme (see ‘Mapping ancestors’). And in the past 30 years, more than 1,500 sets of ancestral remains have been returned to Australia, mostly from the United Kingdom, but also from the United States, Canada, and half a dozen European nations, although some museums still refuse to repatriate remains and cultural objects.