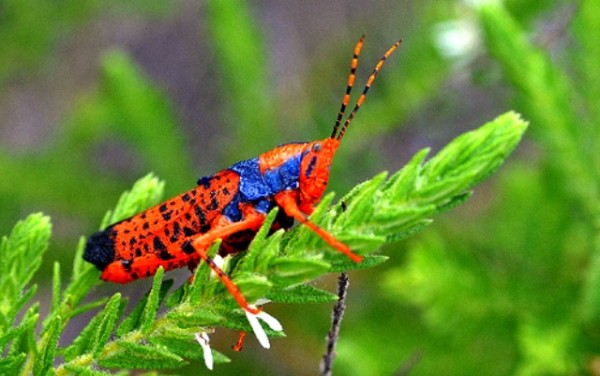 Cherry Wulumirr Daniels, now 71 years old, can remember as a child being told not to touch the strikingly coloured orange and blue grasshopper because of its cultural significance. The Ngandi woman, founder of the Yugul Mangi Rangers, is one of only a few people from the Aboriginal community of Ngukurr in south-east Arnhem Land who recognised the grasshopper when rangers came across it on a hot November day last year.

The first Western scientific record of Leichhardt’s Grasshopper was by European adventurer Ludwig Leichhardt in 1845 and the only recorded sighting in the area since then was in 1971. So the rangers are justifiably excited.

The Yugul Mangi Rangers were out on country with two ecologists when they spotted the grasshopper. Together, they were recording species of plants and animals using a combination of Indigenous knowledge and Western survey methods.

This biodiversity survey is part of a pilot project (one of two) exploring two-way learning and sharing of knowledge between south-east Arnhem Land Traditional Owners and the online Atlas of Living Australia—a vast repository of information about Australia’s plants and animals, which anyone can access for free.

The type of knowledge that can be shared may include a species’ Aboriginal name(s), information about its biology, where it’s found, its use in bush medicine or as bush tucker, and any cultural significance.

“We want to make the Atlas more useful to Indigenous communities,” explains Rebecca Pirzl, Team Leader at the Atlas of Living Australia. “We recognise the importance of Indigenous people’s ecological knowledge and their perspectives on biodiversity, and we want to give it prominence alongside western science, in partnership with Traditional Owners and in a way that supports their aspirations. These two pilot projects will shape our understanding of their needs and desires.”