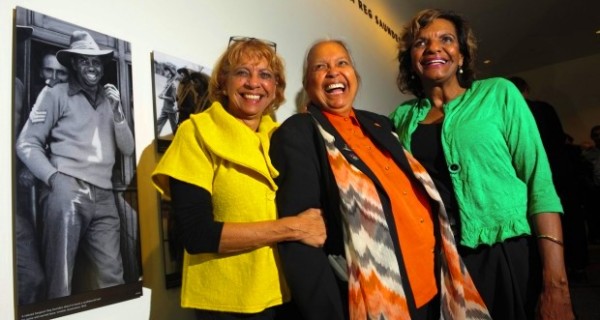 Reg Saunders’ daughter Glenda Humes remembers walking down the aisles of a supermarket in country Victoria as a young girl, surrounded by shoppers high-fiving her father.

He was a talented Australian rules footballer, she said.

Captain Reginald Walter ‘Reg’ Saunders was also the first indigenous Australian to be commissioned as an officer in the Australian Army and is arguably the country’s best known Aboriginal soldier.

Now, Captain Saunders is set to become perhaps, even more recognisable.
After the major crowds had cleared from the Australian War Memorial on a rainy Remembrance Day in Canberra, about 70 of the late serviceman’s family gathered for the opening of the Captain Reg Saunders Gallery and Courtyard – the first space inside the memorial to be named after any Australian.

Captain Saunders served in the Middle East, Greece, Crete and New Guinea during the Second World War, before serving in the Korean War as captain of the third battalion of the Royal Australian Regiment.

Through his service in the Australian Defence Force and later with the Office of Aboriginal Affairs, he is also remembered as a strong advocate for breaking down discrimination against Indigenous Australians.

Memorial director Brendan Nelson described the former Western Gallery as a place “where some of the most emotional and transformative things have occurred in my almost three year tenure here”.

He said the memorial’s council voted unanimously to name the space after Captain Saunders.

“Only one person is going to have his name on anything inside the Australian War Memorial – that’s Reg Saunders,” Dr Nelson said.

“This is not some quiet corner of the museum.”
Read more
Positions Vacant » View All
» Trainee Aboriginal Heritage Colln Asst – MAGNT
» Risk & WHS Manager – Australian Museum
Latest News » View All
22 director roles vacant in US museums
- why does nobody want them? Read more.
Museum rivalry ‘could make Dutch Vermeer
show last of its kind’ as co-operation drops Read more.
Museums Aotearoa new CE announced
by Co-chairs as Adele Fitzpatrick Read more.
NMA opens Inbetween – exhibition from
Aus pavilion Venice Biennale Archi 2021 Read more.
Convicts & Democracy: Conviction Politics
Hub launched by Sally McManus, Sec, ACTU Read more.
Top +
Council of Australasian Museum Directors, c/o Ms Daryl Karp, Museum of Australian Democracy at Old Parliament House PO Box 3934 Manuka, Australian Capital Territory 2603 Australia, © CAMD 2021
Copyright: All information and resources provided on this website remain the copyright of the Council of Australasian Museum Directors. Permission is granted for viewing and downloading for personal and not for profit purposes. Those wishing to reproduce any materials for commercial, educational or other uses are requested to contact us.
Disclaimer: The content of this website is provided for information purposes only and is not intended as a substitute for professional advice. No claim is made as to the accuracy or authenticity of the content of the website. The Council of Australasian Museum Directors does not accept any liability to any person for the information or advice (or the use of such information or advice) which is provided on this website. The information on our website is provided on the basis that all persons accessing the site undertake responsibility for assessing the relevance and accuracy of its content. No responsibility is taken for any information or services which may appear on any linked web sites. Hostgator.
.