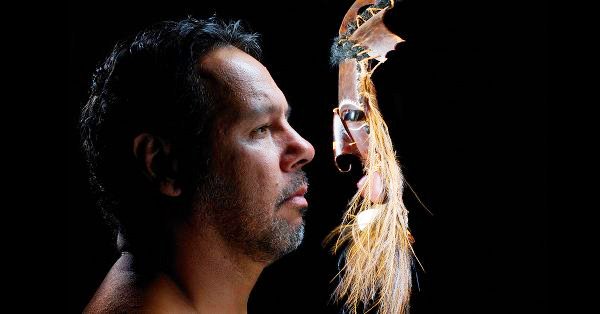 Paul Daley, Indigenous treasures, briefly on loan to Australia, are about to be taken away – again, The Guardian, 22 March 2016

Henrietta Fourmile Marrie stands at the podium, a diminutive figure at a lower corner of the cavernous stage

The conference comes in the closing weeks of Encounters, a controversial four-month exhibition at the National Museum of Australia.

Based on loans from the British Museum’s 6,000-plus-item Indigenous Australian collection, Encounters has, variously, caused significant pain, division, conflicting emotion and anger in Aboriginal and Torres Strait Islander communities, wonderment among visitors and, importantly, new discussion about the innate, enduring power imbalance between first peoples and the cultural institutions that “own” their things.

The giant image of Marrie’s great grandfather is on the screen behind her. His very essence, his spirit, is, meanwhile, also just a few hundred metres away, in the Encounters exhibition, from where it will soon be whisked back to the British Museum, Great Russell Street, London.

Marrie’s membership of the National Museum’s Indigenous reference group does not temper her public criticism that many Australian and international collecting institutions holding artefacts, photographs and research on Australian first peoples symbolise dispossession.

She speaks softly. People in the national museum’s Visions Theatre lean forward in their seats to listen. Some gasp at what she says. Some weep.

“The picture you see there – my grandfather. And the necklace and the headgear … which he wears and the shields which are also beside him in the exhibition – these are the spiritual connection that I have,” she says. “These are my connection to my great-grandfather. We don’t hold collections of them and nor do they stay here – it goes back to the British Museum.”