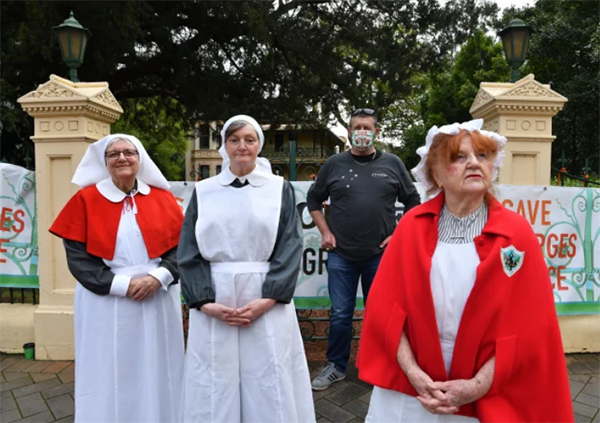 Infrastructure NSW has flagged the relocation of a historic building that has been earmarked for demolition to make way for the new Parramatta Powerhouse.

The agency raised the compromise plan during talks with the Construction, Forestry, Maritime, Mining and Energy Union (CFMEU) amid growing public calls to save the former maternity hospital, Willow Grove, and a row of 19th-century terraces in Parramatta.

The union has slapped a green ban on the two locally heritage-listed buildings which threatens to stall the $840 million Powerhouse project.

At a meeting with museum planners, Infrastructure NSW asked the union if it would support the dismantling of Willow Grove and its re-erection in a new location.

The union was told that the alternative – a complete building redesign to retain the Italianate villa on-site – would delay the project by one year and ground construction jobs.

“We made it clear that the union completely rejects that idea,” the union’s NSW secretary Darren Greenfield said. “It is bizarre to think the government would spend tens of millions of dollars to take the building apart and tens of millions more to put it back together somewhere else. It is perfectly fine right where it is.

“The entire property at Willow Grove is important to the people of Parramatta and NSW. The CFMEU will not accept any plan that does not preserve the property in its entirety in its current location.”

No alternative site was identified but planners were open to the idea of relocation with early costings suggesting it could be achieved for $10 million, not including any land purchase. Proponents point to the example of Richmond Villa which was annexed to NSW Parliament and relocated to Millers Point.

Meanwhile, members of the NSW Nurses and Midwives’ Association (NSWNMA) committed to join the CFMEU in a public blockade to save Willow Grove from bulldozers. 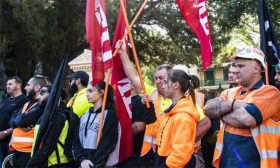 The CFMEU has announced a green ban on Willow Grove. Credit: Louise Kennerley.

But a report prepared on behalf of Infrastructure NSW, the agency driving the development, recommended the new Powerhouse proceed anyway as the public benefits of western Sydney’s first major, world-class cultural institution outweighed heritage concerns and the loss of the local community’s sense of place.

Historian Dr Terry Kass researched the site’s past for the North Parramatta Residents’ Action Group and uncovered a history of ownership by women in millinery, drapery, health and maternity services.

Dr Kass found that Willow Grove, built in 1891, was a rare example of a riverside villa once occupied by the professional class which has survived CBD development and holds social significance for local families with members born at the hospital. 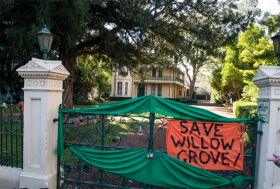 Willow Grove in Parramatta is slated for demolition to make way for the new Powerhouse. Credit: Louise Kennerley.

Suzette Meade, a spokesperson for the North Parramatta Action Group, said Willow Grove should be left where it is.

“Just move the proposed Parramatta Powerhouse project 900 metres down the road to the enormous 30 hectare Cumberland Hospital Precinct,” Ms Meade said. “This state-owned land is far more suitable for an arts and cultural precinct with the added bonus that it doesn’t flood.”

Ms Meade said the nurses’ endorsement of the campaign to preserve the buildings had, “increased the drive and passion for community and heritage supporters from all over Sydney to win the battle to save Willow Grove and St Georges Terrace.”

“Willow Grove is an exceptionally important part of the history of women’s health care at the most important time in their lives, as they give birth. Initially built by local businesswoman Annie Gallagher, wife of prominent Parramatta Alderman Thomas Gallagher, it served as a maternity hospital from 1919 to the late 1950s, which makes it so special to generations.”

NSWNMA Assistant General Secretary, Judith Kiejda, said the planned demolition of the two sites was devastating for the Parramatta community and the colonial history of maternity services.

“Parramatta light-rail project has been enough of a circus for the nearby Female Factory Precinct and efforts to obtain its world heritage listing. We won’t stand by and watch Willow Grove and St George’s Terrace go under a bulldozer without a fight,” Ms Kiejda said.

While the green bans and blockades can’t stop the project proceeding, they can add to project delays and costs if tier one construction companies, those capable of fulfilling a major infrastructure contract, are deterred from bidding or need to factor in the risk for protests.

An Infrastructure NSW spokesperson said the agency was reviewing all public submissions and its response would be outlined in a formal public report.