You are here: Home » Articles filed under: 'News' » Article: 'Inside the nature zone: Te Papa invests' 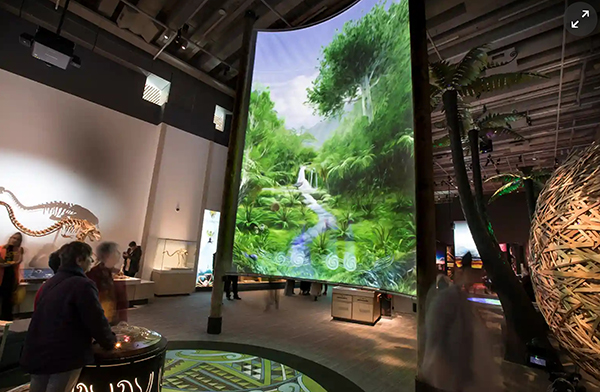 By placing their hands on a carved touchstone, visitors can use their mauri or life-force to add life to the landscape on the interactive screen. Photograph: Maarten Holl.

Eleanor Ainge Roy, Inside the nature zone: New Zealand’s major museum investment is an urgent call to action, The Guardian, 11 May 2019

Where the southern Alps meet the sea on the west coast of New Zealand’s rugged south island, Hinerangi Barr and her whanau (family) hold a tribal story like no other: the landing place where Maui, hero of the Pacific, took his first steps on Aotearoa.

It is not a well-known story, even to New Zealanders, but it’s sacred to this small sub-tribe of Ngāi Tahu, Kāti Māhaki. Two years ago, a large contingent of the creative team of Te Papa – New Zealand’s national museum – ventured 700 kilometres south to sleep on the floor of the tribal marae (meeting house) and record the story of Maui’s landing for an audience that will eventually number in the millions.

“We were quite overwhelmed,” remembers Barr, who wears two stones of pounamu at her throat and wrist, in shades of unusual turquoise.

“It was a bit confronting to consider having our story told at Te Papa, on this huge scale. We wanted to share the story but we also felt a bit anxious – how could we also protect the story?”

On Saturday, Te Papa will unveil its biggest development since its inception 21 years ago, the result of the largest ever investment in a museum exhibition in the country. Te Taiao Nature, a NZ$12m permanent nature zone, explores New Zealand’s natural environment, from Maui’s first landing on the pristine coast at Bruce Bay, to the threat of predators, climate change and pollution in the modern world. A 700-year-old fractured moa egg sits at the heart of the exhibition, cocooned in a 70-square-metre, four-metre-high bird’s nest woven from recycled materials. Inside, the songs of native birds extinct and threatened surround you, some now calling from the grave.

It is hoped the bird’s nest will inspire New Zealanders to tap into their role as kaitiaki (guardians) of the land, and motivate them to step up to protect their homeland at a time of unprecedented environmental threats and bio-diversity decline.

Completely dual lingual, the exhibition weaves Indigenous knowledge and western scientific discoveries seamlessly, giving neither the upper hand, but presenting them as complementary to a robust and deep understanding of the country’s unique natural environment, which evolved in isolation over millions of years.

At a time when museums around the world are struggling with how to become more diverse and inclusive, Te Papa is leading the way in its symbiotic relationship with New Zealand’s Indigenous people. Bi-culturalism isn’t an afterthought at Te Papa – it’s the institution’s life blood.

“I think the Māori world view and the scientific world view interact with a lot of respect here,” says Barr, who considers Mt Cook an ancestor, the roaring west coast rivers as whanau, and the rainforests of South Westland as living, breathing relatives.

“It was amazing watching Te Papa’s entire design team come down to this quite remote place. It’s about them honouring their foundations and honouring their treaty of Waitangi obligations. I think we’ve still got a long way to go with valuing Indigenous knowledge, but it’s getting stronger and stronger.”

Dr Susan Waugh, Te Papa’s head of science, shies away from calling the exhibition a display of activism from a state-funded institution, but admits her team chose to feature environmental issues that visitors would feel capable of taking action over, such as New Zealand’s degrading freshwater quality, and plastic pollution.
It is Waugh’s hope that her team will one day be forced to remove parts of Te Taiao as they become out of date; that the unswimmable rivers of the north and south islands will become summer hotspots again, just as the Labour coalition government has promised.