You are here: Home » Articles filed under: 'News' » Article: 'Inside the world of Sydney arts philanthropy'

Inside the world of Sydney arts philanthropy

April 14th, 2022 | Browse other: News. | Tagged with: Inside the world of Sydney’s power patrons, The art of philanthropy | 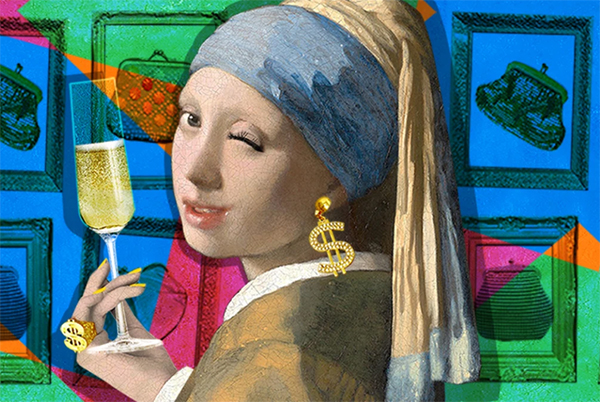 The art of philanthropy: more than ever arts and cultural institutions are asking donors to open their purses. Credit: Illustration by Dionne Gain.

Linda Morris, ‘You can’t take a billion with you to the grave’: Inside the world of Sydney’s power patrons, The Sydney Morning Herald, 8 April 2022

Deep-pocket donors are being relied on more than ever to bankroll the city’s arts and cultural institutions as they recover post-pandemic. Meet some of the key patrons who, in rare interviews, raise the curtain on the world of philanthropy.

Live music stopped, festivals were cancelled, shows and exhibitions closed. When the full force of the global pandemic hit Australia, in March 2020, everything changed. The following weeks, months and years were a dark time for creators and creative institutions across the nation. As the country’s cultural infrastructure shook and those in arts industries found themselves bereft of work or income, an SOS went out to Sydney’s committed arts philanthropists.

The Museum of Contemporary Art raised close to $1 million, a record for the gallery, when its annual fundraising appeal took on real urgency. The Australian Ballet, Bangarra Dance Theatre and Belvoir St Theatre also received unprecedented philanthropic support during that first year of COVID-19. 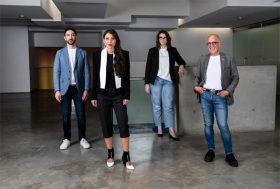 The immediate crisis over, Sydney’s leading philanthropists have not stopped giving, their capacities bolstered by an equities and real estate boom that has defied expectations of recession, their tax-deductible gifts delivered mainly through philanthropic foundations.

“A lot of people have made a lot of money in business and the share market,” says gallerist, fundraiser and philanthropist Philip Bacon. “That money is looking for a home and something to do with it.“

But the gene pool of committed donors remains stubbornly small while the need is exponential, says investment banker and philanthropist Simon Mordant, one of those who dug deep during the pandemic. Australia is ranked in the bottom third of OECD nations for spending on arts and culture, government spending not keeping pace with population growth. Last week’s federal budget saw off the last of the COVID-19 support money and offered little new, and even backward steps, as the devastated sector attempts to rebuild after a horror two years.

“This will be the decade of the biggest wealth transfer in Australian history,” Mordant says. “Where are the examples of Australia’s tech billionaires and the children of mining families conspicuously supporting the arts? You can’t take a billion with you to the grave – or $10 billion, for that matter.”

The artist boycott of the 2022 Sydney Festival, tripped by its acceptance of sponsorship from the Israeli embassy, illustrates the tensions between business, soft diplomacy and the arts world, the latter of which is about “taking risk and being socially aware and critical and pro-active”, says Caust.
“Everybody is needing money but if you take it from whoever offers it, there is always an obligation as well – it is not a free transaction,” she says.
But the arguments around undue influence could equally apply to the government where support can come with a direction, price or to influence voting patterns, Caust says. 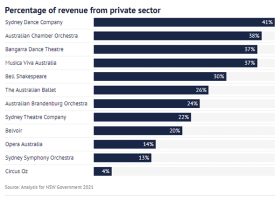 Most donors are mindful of the issue and want to support, rather than direct, the vision of the organisation they are funding, says Sam Meers, co-founder of the Nelson Meers Foundation which doubled down on its giving during COVID-19. “So yes, my view is that a mix of funding is optimal, as it provides a kind of check and balance.”

Philanthropy should always be additional to public investment in the arts, rather than one or the other, says donor EsteDarin-Cooper, who says art that inspires and raises us all needs funding for its own intrinsic worth, not only for some measurable economic or societal outcome.

Part of that involves organisations talking openly about what didn’t work as much as what did, says Meers.

“I think we all agree that cultural organisations need to embrace creative risk, and failure is, of course, inherent in risk-taking – but it’s hard to have a positive conversation about how something can be done better when you’re worried you might lose your funding.”

Sydney’s leading philanthropists are a roll call of financial and equity investors, property developers, a few hoteliers and media types with a parsimonious sprinkling of old money.

Motives vary. Legacy-seeking donors approaching the end of long careers find meaning in named galleries, brass plaques or mentions on concert programs. Others write their cheques anonymously, wishing no fanfare. Relationships are key. Arts organisations that cold-called potential donors during the pandemic were invariably disappointed. Help generally came after a push from “an already opened door”, according to Kate Fielding from the arts think tank A New Approach, itself a joint philanthropic venture spearheaded by Rupert Myer amid the turmoil of COVID-19. 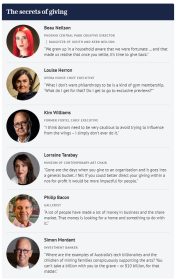 In soliciting donations from high-wealth individuals, the leaders of major cultural institutions often work as a double act or triple bill: the chief executive or director makes the case for support, and the chair, themselves a person of influence, does the asking. A passionate artistic director, wise to philanthropy, can add that touch of magic fairy dust. “If you are not excited by a company and their mission, it’s difficult to find a reason to support it,” says Darin-Cooper.
The Opera House’s Louise Herron, herself a donor, rates businessman David Gonski, president of the Art Gallery of NSW Trust, as Sydney’s “master fundraiser”.

Having raised $109 million for Sydney Modern – almost one-third of the project’s cost – Gonski and his trustees have gone back to donors to quietly raise millions more for the art inside. The depth of fundraising remains the envy of much of Sydney’s arts scene, their donors’ list and strategies much copied.

Actor Rebel Wilson donated $1 million to her alma mater, the Australian Theatre for Young People, a gesture that has given the youth theatre the confidence to stage its first professional season. At the Australian Chamber Orchestra, executive director Richard Evans and chair Guido Belgiorno-Nettis raised $16 million of $22 million needed for their new premises at Walsh Bay, anchored by a $5 million donation from arts patron Kerr Neilson, who has also given another $3 million to Bell Shakespeare, the largest donation in that company’s history. 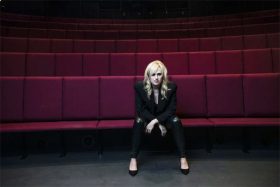 Neilson believes his generation was born in a gilded age of opportunity.
“In my view, if one attributes such good fortune entirely to one’s hard work, one is probably a fool,” Neilson says.

“One can easily hide behind the argument that governments waste money, and taxes, including surchages and GST are high and absorb well over half one’s income. However, I reason that this is tantamount to disengagement from one’s society and fails to ask why do not have walled communities and why do we still have such relatively high levels of personal freedom. A long way of saying, open civil societies are worth protecting, and a little extra from those with it could be regarded as expediency rather than being defined as kindness. Better still, it gives one purpose.“

The late Neil Balnaves typified the hands-on philanthropist. Once wooed by the power of an idea, he “wanted to be in the driver’s seat with you”, recalls National Gallery of Australia director Nick Mitzevich. “He wanted to go through all the twists and turns. He was the one who wrote cheques but was happy to contribute to strategy and game plans, so he brought his business acumen to the table as well.”

Others, such as former Foxtel chief Kim Williams, invest in the artists and companies but prefer the back seat.

“I think donors need to be very cautious to avoid trying to influence from the wings – I simply don’t ever do it,” says Williams, who spreads his philanthropy across the performing arts and documentary filmmaking. 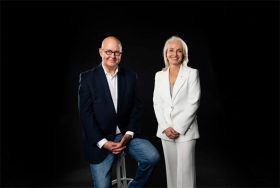 Williams regards private giving as “still in a place of early gestation in Australia” compared to the US, where huge endowments underwrite an institution’s operating costs as well as acquisitions and building renovations.
Post pandemic, he says, performing arts companies are less bashful in the way they approach donors and more strategic in who they target, trying to find points of relatability.

“A number of organisations suggest a donation of X, and you think ‘that’s a large number’,” Williams says. Does he always sign on? “Life is not a dress rehearsal and there is the joy of seeing creative work take place. A creative life is the crucible of life itself. It really matters, and COVID-19 only proved that. ”

In seeking donations for Opera Australia, art dealer Philip Bacon wears two hats. “When I am asked, I ask back.” Bacon increased his gifts to Opera Australia, the National Gallery of Australia, and the Queensland Art Gallery, by 50 per cent when COVID-19 first hit, and has maintained his level of support.

Meers was inundated with requests for assistance during COVID-19. “The hardest thing is saying no, because there never is enough money for worthy causes. That’s why you end up spending half your time giving money and the other half fundraising because you constantly see projects you want to see succeed.”

Annual appeals and patron gala nights have returned to Sydney’s social calendar after a COVID-19 hiatus. Such fundraisers are resource-intensive but sit at the cornerstone of many companies, including the Sydney Dance Company’s philanthropic drive. But nothing beats the direct personal approach.

“You can’t just say ‘please support the Opera House’ anymore,” Herron says. “If you want to make a difference you have to define what you want, and you’ve got to sell it. What I don’t want philanthropy to be is a kind of gym membership. ‘What do I get for that? Do I get to go to exclusive previews?’ Of course, we’ll involve you. But to me, anything else is not philanthropy, it’s marketing.”

New museum wings and theatres and new art catch the eye of philanthropists. With no ribbon to cut, raising private money for core programs, operations or maintenance is a tougher ask, even more so for small-to-medium organisations without the professional fundraising teams and the PR megaphones of major cultural institutions. Yet building the capacity of an arts organisation to withstand recessions and pandemics is the single most important investment a philanthropist can make.