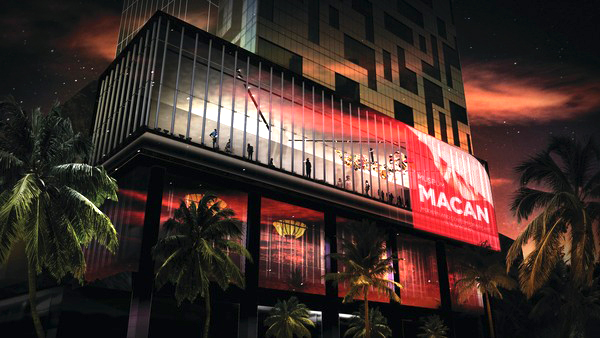 Gareth Harris, Our guide to the most important new museums and expansions in 2017, The Art Newspaper, 10 January 2017

Museum Macan, Jakarta
What: Indonesia gets its first Museum of Modern and contemporary art, based in the country’s capital, Jakarta.
Architect: London-based Met Studio Design
How big: 43,000 sq. ft
How much: undisclosed
Funder: The museum founder, the businessman Haryanto Adikoesoemo
When: November
What they say: “Museum Macan will be the first institution of its kind in Indonesia, providing public access to a significant and growing collection of Modern and contemporary art from Indonesia and around the world.”
What we say: Adikoesoemo’s collection includes works by key Indonesian artists such as Heri Dono and Agus Suwage as well as blue-chip names including Gerhard Richter and Andy Warhol. The inaugural show will focus on the collection presenting a “disrupted chronology” from the 19th century until today.

Tate St Ives, Cornwall
What: Tate St Ives, which has been closed for 18 months, reopens after extensive renovations.
Architect: Jamie Fobert Architects, London
How big: 595 sq. m of new gallery space
How much: £19.9m
Funders: The Heritage Lottery Fund, Arts Council England, Coastal Communities Fund, Cornwall Council and the Headley Trust
When: The museum partially reopens in the spring with two exhibitions, The Studio and The Sea, in the existing gallery (31 March-3 September). The refurbishment programme is scheduled for completion in the autumn.
What they say: “Opened in 1993, the original Tate St Ives building was designed to accommodate up to 70,000 visitors per year. The gallery and its programme attracts over 240,000 visitors per year, with up to 2,000 visitors per day during summer months.”
What we say: A new gallery will be used as a temporary exhibition space, and there will be a new permanent display of work by artists associated with St Ives.

Louvre Abu Dhabi, Abu Dhabi
What: The long awaited Louvre Abu Dhabi, a major encyclopaedic museum in the Middle East, is due to open on Saadiyat Island, the new museum and culture quarter developed by the Abu Dhabi Tourism and Culture Authority.
Architect: Jean Nouvel
How big: 9,200 sq. m of galleries for permanent displays; 2,000 sq. m for temporary exhibitions.
How much: The project has been financed to the tune of $1bn by the Emirati government.
Funder: In 2007, France and the United Arab Emirates signed an unprecedented agreement to create the Louvre Abu Dhabi.
When: No official opening date has been announced but the building is scheduled for completion by the spring.
What they say: “Louvre Abu Dhabi is intended to be a place of discovery, exchange and education. It will also play an important social role in United Arab Emirates. In this respect, it can be seen as a product of the 18th-century Enlightenment in Europe. This movement gave birth to the principle of the encyclopaedic and universal museum housing diverse collections of works for the purposes of public display and scientific study.”
What we say: Twelve other French institutions, including the Centre Pompidou, have agreed to contribute loans in exchange for a €265m fee spread over 15 years. In 2008, the Louvre’s then-director, Henri Loyrette, told us that the deal represented “a revolution” for French museums because it provided them “with what you in the US and UK are used to—namely, an endowment fund”.