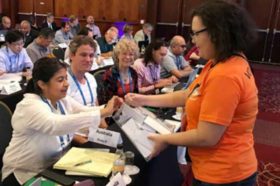 The economic and scientific benefits to Australia’s membership of major global science organisations have been outlined in a report released today by the Australian Academy of Science.

The report shows that Australia benefits as a member of global science organisations by:

“As members of international science organisations, Australians scientists have the opportunity to help shape science in our region and beyond,” said the Academy’s Foreign Secretary, Professor Elaine Sadler FAA.

Diplomacy through science also provides benefits to Australia and the national interest is well served when scientific activities open doors and broker dialogue with other nations, especially where geopolitical issues might otherwise slow positive cooperation.

“In Australia science is an under-used element in diplomacy and it is not yet recognised as a key soft power asset, whilst in countries around the world science diplomacy is fast becoming a strategic part of the national tool kit,” Professor Sadler said.

Australia has felt the absence of an international engagement strategy for science, technology and innovation with long-term resourcing.

Such a strategy would enable Australia to:

Internationals scientific engagement is a key priority included in the Australian Academy of Science priorities for the 2019 federal election: Earning Our Future.

Since it was formed in 1954, the Academy has received funding from the Australian Government to oversee membership of these organisations on the nation’s behalf. It manages these memberships with guidance and assistance from the Academy’s 22 National Committees for Science and the more than 450 scientists who are active in various levels of the organisations at any time.

Professor Elaine Sadler FAA and Sir Peter Gluckman are available for media interview on release of the report at 7.30am AEST Wednesday 17 April.

Specifically, the ISC advances science as a global public good by convening the scientific expertise and resources needed to generate international action on issues of major scientific and public importance; provides advice to international bodies such as the United Nations; and champions the universality of science to promote free and responsible conduct of science, by protecting the freedom of movement, association and expression of scientists, ensuring equitable access to data and other resources and supporting capacity development in developing countries.

The ISC has a membership of 40 international scientific unions and associations and over 140 national and regional scientific organisations. On behalf of the Australian Government, the Academy is a member of the Council and 30 of its member bodies.