You are here: Home » Articles filed under: 'News' » Article: 'Is it true that scorpions glow in the dark?'

Is it true that scorpions glow in the dark? 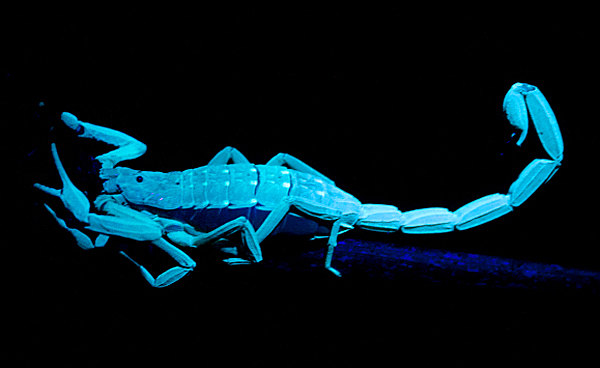 The helpful and knowledgeable staff of the Queensland Museum Network often assist members of the public with the identification of insect, animal, fossil and geological specimens. Our experts also answer questions about Queensland’s animals, rocks and fossils, people and history. In this new section, we share some of these questions and answers with our readers.

QUESTION:
Is it true that scorpions glow in the dark?

ANSWER:
Some organisms can glow, but they do so in different ways. Fireflies and some fungi produce a glow called bioluminescence. Using a chemical reaction including oxygen and a light emitting compound such as luciferin, they emit a green light visible in the dark for many metres. Scorpions, however, produce a glow via fluorescence.

Under ultraviolet (UV) light, chemicals in their exoskeleton (the outer shell) absorb and re-emit UV light causing the scorpion to glow or ‘fluoresce’ blue-green. An unidentified substance in a very thin layer in the cuticle of the scorpion called the hyaline layer is responsible for the production of the glowing effect when it is exposed to UV light. By shining a beam of UV light on a scorpion, you can make it glow. Natural moonlight has a similar glowing effect when reflecting off the scorpion’s exoskeleton. Newly moulted or young scorpions do not fluoresce until their exoskeletons harden.

Just why scorpions glow remains a mystery but there are several suggestions. What we see as a dark night still has some level of light, such as moonlight. As scorpions scurry around at night, parts of their bodies pass under shadows. It has been proposed that scorpions can detect these shadows because the UV reaction to the light falling on their body has been partly interrupted. This could possibly help scorpions find shelter in their dark environments. This idea suggests that the scorpion’s exoskeleton works as a large sensor, sending information about light to the nervous system and allowing the scorpion to find the protection of a shaded area where they are less vulnerable to predators.

However, some arachnologists contend that the glow of the scorpion’s cuticle is not adaptive, and suggest that it may simply be an accident of evolution. There may not be a need for them to glow; instead it could just be a side-effect of having a unique cuticle. Provided such a feature is of no detriment to the animals’ survival, there is no selective pressure against its retention. Surprisingly even some fossil scorpions have been known to fluoresce or glow! Clearly the mystery remains and the debate will continue.

Scorpions are among the oldest known terrestrial arthropods. They belong to the class Arachnida and are related to spiders, mites and ticks. All scorpions have a venomous sting. Overseas, there are some extremely lethal species that have caused numerous human fatalities. There are no recorded deaths from Australian scorpions. Reported reactions range from mild to extremely painful, but it must be remembered that individual responses to toxins can vary greatly, so an insubstantial sting for one person may have serious consequences for another.

Australia is home to more than 40 species of scorpions. They range from desert dwellers that dig deep spiralling burrows and are large enough to eat geckos to small insectivorous species that hide behind loose bark and under logs in moist forests. Scorpions are surprisingly abundant in parts of southeast Queensland, but they are extremely secretive and easily overlooked. The Discovery Centre frequently receives inquiries from householders who are surprised to have encountered one. Most people want simple information about whether the scorpion may be dangerous, but others want a more detailed account of scorpions and their ecology. Whether over the counter, by phone, or via the museum website through the ‘Ask an Expert’, they have found something interesting and turned to the museum as an information resource.

Each year, the Discovery Centre fields about 10,000 inquiries about a diverse range of topics including reptiles, frogs, spiders, birds and mammals, cultural heritage and paleontology. These are either answered directly by the Discovery Centre staff or referred to museum curators. The Discovery Centre is available as a free information source seven days per week, between 9.30am and 5.00pm.