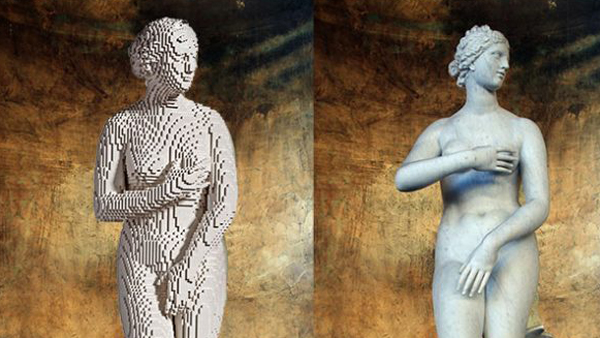 Our Curator of Historical International Art, Dr Mark Stocker, is a big LEGO® fan: “I’m a geometrical kind of guy. I love eating Toblerone and if I drove a car it would be a Nissan Cube”.

At Te Papa we’re currently hosting Brickman: Wonders of the World until 18 February. Mark therefore jumped at the opportunity to interview the exhibition’s creator, Australian Ryan ‘Brickman’ McNaught, who is one of just 14 certified LEGO professionals in the world.

MS: Is LEGO art? You have a story about that, Ryan.

RM: Well, I entered a portrait of Daniel Grollo, who has built Australia’s tallest skyscrapers, for the Archibald Prize in 2011. But the gatekeeper, a posh lady at the Art Gallery of New South Wales, said ‘LEGO isn’t art!’ and rejected it outright.

MS: Outrageous! What about Antony Gormley’s Brick Man (not Ryan!) or Chuck Close’s Lucas, which are destined for LEGO? And then there’s the version of a famous Seurat painting in the exhibition, more of which later. Is this an isolated case of an art world response? 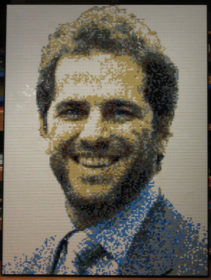 RM: Most work I do is focussed on children. The art world isn’t normally approached – but I’d love to try! LEGO HQ in Billund, Denmark, has had several artists in residence. But it doesn’t seem to operate much the other way, even though Ai Weiwei has recently worked in LEGO. Museums, yes, there’s been LEGO at the Guggenheim, Te Papa, the Powerhouse, but not the Louvre or MoMA.

MS: When I look at LEGO versions of great art works, I get a real buzz. One that made a particular impact on me at Te Papa is Michelangelo’s David.

MS: Even though the way you make it is opposite, I think of the block of marble and the blocks of LEGO. Its monochrome is austere and effective. It’s even got some of the monumentality of the original.

RM: Right! And making it really makes you humble when you think of Michelangelo’s creation. In carving you take away but in LEGO we add. One slip and that’s it for marble, not so for LEGO, we can cover up our mistakes! A related work is the Venus de’ Medici – making the dolphin support was a nightmare…

MS: And Venus’s curves aren’t exactly LEGO friendly are they?!

Is LEGO building an art or a craft?

MS: Ryan, do you see yourself as an artist or a craftsman?

RM: A craftsman. I get huge pleasure from seeing my creation progress from conception to finish: I’d liken it to turning an object in wood or making a picture frame. Some of my colleagues say ‘I’m an artist!’ I’m OK with that. But if someone calls one of my models ‘a work of art’, of course I’m happy to hear that too.

How to engineer in LEGO

MS: What about the role of engineering in LEGO?

RM: Engineering is a hugely important aspect, all the more important when you make models on any scale. These have often got armatures – you only see the LEGO surfaces. Look at the Titanic following her impact with the iceberg, that’s many people’s favourite work in Wonders of the World. It obviously requires cantilevering, a knowledge of forces and gravity, you’ve got to know beforehand whether it will stand up…

MS: Or face a ‘titanic’ collapse and even a health and safety issue! There are certain parallels, aren’t there, with the stump in a marble sculpture supporting the figure?

RM: Absolutely, and then we hang things in galleries over people’s heads. Don’t underestimate the hours of maths that I have to put in, the preliminary drawings I make with sharpies on butcher paper, before two bricks are ever joined.

MS: While it’s easy for an arty person like me to underestimate this side of it, surely LEGO is engineering plus art?

RM: Yes, there’s got to be scope for form, style, artistic flair, and for those quirky touches that make people smile because they can identify with them, like the little Lego oil spill under the motor of the VW Beetle!