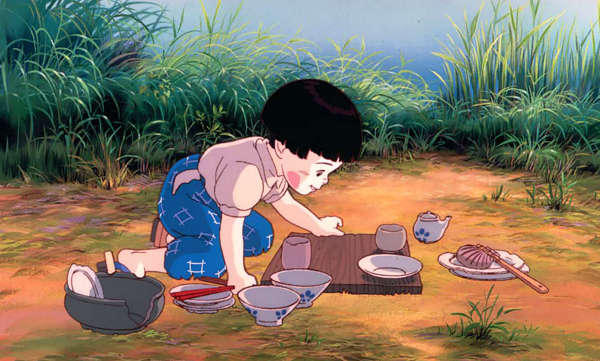 A still from Grave of the Fireflies, 1988, an emotionally harrowing antiwar film directed by Isao Takahata.

One of the key figures in Japanese animation who co-founded the internationally renowned Studio Ghibli.

For more than 50 years, Isao Takahata, who has died aged 82, played an instrumental role in forging the international reputation of Japanese animation. He was one of the two key figures behind Japan’s leading animation house, Studio Ghibli, which he co-founded in 1985 alongside Hayao Miyazaki, and the director of such poignant works as the antiwar film Grave of the Fireflies (1988) and the Academy award-nominated The Tale of the Princess Kaguya (2013), based on a 10th-century folktale and realised in a style influenced by traditional Japanese ink-wash painting.

Yet in contrast to the freewheeling and design-based approach of his more prolific colleague, Takahata never put so much as a pen to paper during the animation process. Nonetheless his sophisticated, character-driven animations explored a diverse range of themes and aesthetic styles, often confounding expectations as to what was possible within the medium. Grave of the Fireflies presented an emotionally harrowing account of a young brother and sister left to fend for themselves at the tail end of the war after their mother is killed in an allied bombing raid.

Adapted from a short story by Akiyuki Nosaka, the film contained several sequences drawn from Takahata’s own memories as a nine-year-old of the night-time raids over the city of Okayama, running barefoot through the night in his pyjamas with his sister. In Only Yesterday (1991), a Tokyo office girl’s nostalgic recollections of her childhood in the late 1960s bubble to the surface when she returns to the mountainous Yamagata area where she grew up.

There were more fantastical works too. His feature-length debut at Toei Animation studios, The Little Norse Prince (1968), about a boy’s quest to defend his village from an evil sorcerer, anticipated the style and ambition with which Studio Ghibli would become associated. Pom Poko (1994) was a colourful tale of a community of tanuki, the mischievous, shape-shifting environmental guardians of Japanese folklore who take the form of a raccoon dog, as they rally together to protect their natural habitat from falling prey to a new-town development.

Born in Ujiyamada (now Ise), in Mie Prefecture, the youngest of seven siblings, Takahata moved with his family to Okayama in 1943. After graduating from Okayama prefectural high school, where his father was the headteacher, he enrolled at the University of Tokyo in 1954 to study French literature. It was at this time that he encountered the work of Jacques Prévert and, more crucially, a film that would change the course of his life, Paul Grimault’s animation Le Roi et l’Oiseau (1952; released in Japan in 1955), for which the French poet had written the screenplay. In 2006, Studio Ghibli would distribute Grimault’s extended director’s cut of the original film, while Takahata published a collection of his own translations of Prévert’s poetry into Japanese in 2006.

After graduation, in 1959 Takahata entered Toei Animation, a company that aimed to produce animations of the scope and quality of Disney. He worked as an assistant on the feature-length Little Prince and the Eight-Headed Dragon (1963), before making his directing debut that same year with several episodes of the television series Ken the Wolf Boy (1963-65).

The younger Hayao Miyazaki joined the studio the same year, initially in the lowly position of an “in-betweener”, drawing the intermediary movements between the key images. Takahata and Miyazaki immediately formed a close friendship and working relationship that would endure for more than five decades.

Both shared the ambition to create more dramatic, spectacular and cinematic animation than the kind of children’s-oriented films and TV programmes the studio was increasingly focusing on. By the time of Takahata’s debut with The Little Norse Prince, Miyazaki had been elevated to scene design and key animation duties. Nevertheless, the production went over budget and over schedule, and failed to pull in audiences. Toei withdrew the film from distribution after just a couple of weeks and Takahata was demoted to television assignments.

Frustrated, the two left, along with another Toei animator, Yasuo Ōtsuka, working together to join A Production on the first animated television series of Lupin III, based on the popular manga series created by Monkey Punch, about the adventures of a suave swindler who is the grandson of Maurice Leblanc’s fictional master thief Arsène Lupin. Takahata also directed the short children’s film Panda! Go Panda! (1972) and its sequel the following year.

For much of the 1970s Takahata and Miyazaki would work together on animated TV adaptations of classics such as the popular Heidi, a Girl of the Alps (1974) and Anne of Green Gables (1979), with Takahata directing and Miyazaki responsible for the artwork.

Takahata returned to feature directing with Chie the Brat (1981) and an adaptation of Kenji Miyazawa’s Gauche the Cellist (1982), while working as a producer on Miyazaki’s breakthrough animated version of his own manga, Nausicaä of the Valley of the Wind (1984).

The film’s huge success led to the establishment of Studio Ghibli, the name, due to Miyazaki’s love of aviation, taken from an Italian second world war plane, with Takahata producing Miyazaki’s first work for the new enterprise, Castle in the Sky (1986).

Takahata directed just five features at Studio Ghibli, beginning with Grave of the Fireflies. The critical and commercial failure of My Neighbours the Yamadas (1999), with its rough sketch style and vignette-based narrative derived from a popular newspaper cartoon strip about an everyday Japanese family, saw him move to a more behind-the-scenes role at the studio at the same time that Miyazaki’s films were gaining international acclaim.

He returned to directing in 2013 with the critically lauded The Tale of the Princess Kaguya. In 2016 he produced and provided significant creative input into Ghibli’s first non-Japanese production, The Red Turtle, directed by the Dutch animator Michaël Dudok de Wit. Takahata’s suggestion that the film would be more powerful without dialogue turned out to be absolutely right.