You are here: Home » Articles filed under: 'News' » Article: 'Island Story: Tasmania in Object and Text' 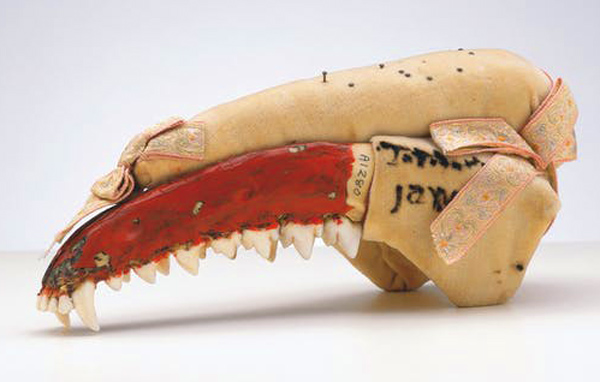 This pin cushion made from the jawbone of a thylacine won second prize in the handicraft section of the Glamorgan Show in 1900. Courtesy: Tasmanian Museum and Art Gallery.

Cassandra Pybus, A fresh perspective on Tasmania, a terrible and beautiful place, The Conversation, October 2018

The island of Tasmania lies suspended beneath Australia like a heart-shaped pendant of sapphire, emerald and tourmaline. Here is where the world runs out, crumbling into the vast expanse of the Southern Ocean.

Island Story: Tasmania in Object and Text offers us a fresh perspective on this terrible and beautiful place. Editors Ralph Crane and Danielle Wood invite the reader to discover Tasmania anew with their inspired juxtaposition of objects from the Tasmanian Museum and Art Gallery with texts as diverse as the objects. The pictures are arresting, the textual extracts are perfectly chosen and the design by Imogen Stubbs is gorgeous. Don’t be misled, this is no bland coffee table book.

As benefits such an ancient place, Island Story opens with the specimen of a hairy-legged cicada, an endemic species so ancient it was resident in the supercontinent of Pangea.

What follows is Thomas Bock’s 1837 portrait of Woureddy, cleverman and warrior of the original people of Tasmania, whose unbroken occupation of the island lasted 40,000 years until colonial invasion brought it to a dreadful end within the short span of Woureddy’s life.

Paired with the portrait is the befuddled interpretation of Woureddy’s narrative of the beginning of the world by George Augustus Robinson, the self-proclaimed evangelical missionary primarily responsible for the removal of all the original owners of the land to distant Flinders Island in the Bass Strait.

Robinson’s grand achievement in “conciliating” the original people of Tasmania was celebrated in an 1840 painting by Benjamin Duterrau, reproduced with a paired text by Greg Lehmann that puts in words an implicit theme of Island Story that “the spectre of genocide must be confronted and its consequences owned”.

The organising principle for the book is “the human desire to see, make and enjoy connections between seemingly disparate things”. A travelling case from the 1920s belonging to the silent movie actress Louise Lovely, paired with an extract from Marie Bjelke Petersen’s novel Jewelled Nights that became a movie in 1925 starring Ms Lovely, seems unexceptional, but turn the page and there is a news photograph of arrests at the gay law reform protests in 1988.

The apparent disparity is resolved with the paired biographic extract by the gay rights activist Rodney Croome recalling his bizarre quest to shake the hand of the abhorrent Sir Joh Bjelke Peterson, favourite nephew of Marie, because his was the last hand to touch this writer Croome so admired.

In my desire to see and make connections I found the dominant trope of this book to be captivity: entirely apposite for a place that began its modern history as prison. Among the more mundane objects is a saw from the infamous prison at Macquarie Harbour paired with historian Hamish Maxwell Stewart’s account of the extreme misery that drove so many fatal escape attempts.

Most chilling is the simple cambric and cotton hood with narrow eye slit for prisoners in the dreadful separate prison at Port Arthur. They had to pull it over their heads whenever they left their cell.

In the paired extract from a travelogue by Anthony Trollope, a man who endured 40 years of frightful punishment at Port Arthur after being transported for mutiny, a boy tells Trollope: “I have tried to escape – always to escape – as a bird does out of a cage”.

A delicate watercolour of three young Hobart ladies by the gentleman painter and convicted forger Thomas Wainwright is paired with his 1844 petition begging he be released from “vice in her most revolting and sordid phase” that constituted his seven years in captivity.

The painter Thomas Bock also spent years as a convict. In addition to his portrait of Woureddy, the book reproduces his exquisite 1842 portrait of Mathinna, the young girl taken from captivity at Wybalenna on Flinders Island and sent to live at government house as a sort of household pet.

A recent photograph of the chapel at Wybalenna is paired with the 1846 petition to Queen Victoria from several young men protesting their unjust treatment at Wybalenna.

One year after the petition, four dozen survivors were transferred to another place of captivity at a disused convict station at Oyster Cove south of Hobart. All of those taken to Oyster Cove died, except for Fanny who had married an ex-convict named William Smith and went to live on land she was granted in the Huon Valley. She is represented here in the wax cylinders that captured her singing in her own language in 1899.