You are here: Home » Articles filed under: 'News' » Article: 'It doesn’t belong in a museum'

It doesn’t belong in a museum

December 9th, 2021 | Browse other: News. | Tagged with: Metropolitan Museum of Art, stolen yakshi strut to be returned to Nepal | 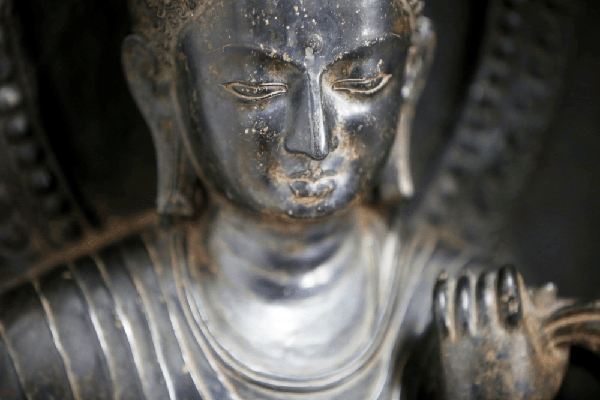 Stolen Nepali art is a key test for Western institutions.

More than 700 years ago, an artist picked up a chisel and began to carve a massive wooden beam into the lithe, sinuous figure of a yakshi, an elemental fertility goddess, to adorn the roof of a temple in Kathmandu’s Itum Baha, a Buddhist monastery. The wooden beam formed a strut to support the roof’s heavy overhang while the yakshi, dressed in stacks of bracelets and elaborate crowns and trampling a demonic figure underfoot, raised a delicate arm to ensure spiritual protection.

The yakshi’s protection worked for centuries—until Western art collectors desired her beauty. As soon as Nepal opened its borders to foreigners in the 1950s, the artworks decorating the country’s shrines began to disappear, feeding the market for Eastern “spirituality” and aesthetics. At first, it was the smaller objects, like small bronze sculptures made for home shrines. But demand soon ran so high that thieves took heavy stone sacred artworks from public temples. The yakshi and her companions vanished from Itum Baha in the mid-1980s, along with almost all the other surviving carved struts in the Kathmandu Valley.

Western museums are full of dubiously acquired art, seized during imperialist raids, purchased for trifling amounts from people in distress, or excavated under agreements made with occupying governments. But while the legalities of such cases are endlessly argued, the situation is much simpler in Nepal. It has never been legal for sacred artworks like the yakshi to leave Nepal, and the country explicitly banned their export in 1954. A museum’s willingness or reluctance to return Nepal’s stolen property is a litmus test for how it will respond to increasing claims for repatriation of other cultures’ plundered heritage.

Last summer, a Nepali activist spotted the Itum Baha yakshi in the collection of the Metropolitan Museum of Art in New York. The museum had accepted her as a donation in 1991, despite the notoriety of the ongoing thefts and the publication of a photograph of this very strut in a 1989 book about the fate of Nepali art. The display of stolen art in Western museums is sometimes defended by the arguments that the artifacts can be better preserved and seen by more people there, but neither of these are true of the yakshi. She is hidden in the museum’s storerooms, appearing only in a low-resolution photograph on its website’s collections database.

And, after centuries in Nepal, it was her theft and export that damaged her. In New York, the yakshi’s feet tread on air, not the demonic image once an integral part of the sculpture. This lower part of the strut remains at Itum Baha, waiting for a reunion. 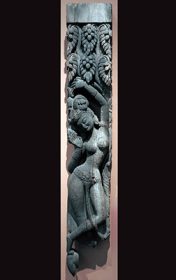 The Itum Baha yakshi from Nepal, titled Temple Strut with a Tree Goddess (Shalabhanjika), at the Metropolitan Museum of Art. GIFT OF EVELYN KOSSAK, THE KRONOS COLLECTIONS, 1991/MET MUSEUM.

The yakshi and the demon might be together again soon. The Metropolitan Museum already returned another sculpture to Nepal in September after similar sleuthing by a new wave of Nepali activists who began spotting stolen art in museums and private collections and demanding their return. These efforts have led to the repatriation of seven artifacts in 2021, and more cases, including that of the yakshi, are pending.

Not every museum has been as willing to cooperate as the Metropolitan. Another 13th century yakshi strut, stolen from a temple in Patan, Nepal, in 1975, remains in the Art Gallery of New South Wales in Sydney after 20 years of negotiations for its return. Meanwhile, Nepali authorities first requested the repatriation of two stone sculptures of deities from the Musée Guimet in 2000. Despite the photographs showing the sculptures in place in their shrines before their theft, they are still in Paris.

It can be hard to feel sympathy for countries asking for the return of antiquities looted from an archeological site. How much can they miss something they didn’t even know they had? The theft of art from a private collection produces a more identifiable victim, but the possession of art by one connoisseur can seem like a fairly minor difference. But Nepal’s stolen art is not just art. Many of these sacred works received daily worship. They were fed, bathed, dressed, and anointed like living beings. Just like the yakshis held up temple roofs, these artworks supported the structure of Nepal’s living culture. To put them in a glass display case is not just to steal them, but to kill them.

Preparations to bring a stolen deity back to life are underway in Patan where, in December, a repatriated sculpture will be reinstalled in the shrine from which it was stolen in 1984. The 15th century sculpture shows, in polished dark stone, a body split in two: on one side, the Hindu god Vishnu, and on the other, his consort Lakshmi. The unusual subject and style should have made it obvious to anyone who cared to know that the work was made in the Kathmandu Valley during one of its artistic golden periods—even if they were unaware of its illustration in another 1989 book, Lain Singh Bangdel’s Stolen Images of Nepal, about the looting of Nepal’s culture. Yet the sculpture sold at an auction at Sotheby’s New York in 1990. By the time a Nepali journalist, Kanak Mani Dixit, spotted the listing, it was too late. The sale was over, and the sculpture had disappeared once more.

Decades later, Joy Lynn Davis, an American artist who had launched a project to research and paint missing Nepali sacred art, recognized the sculpture on display at the Dallas Museum of Art. The museum helped organize its repatriation in March by working with its owner, a private collector who had lent it to be displayed along with other artifacts from his extensive collection of sacred South Asian art. The sculpture will move from the antiseptic white galleries of the museum back to its shrine, newly outfitted with CCTV and other security measures to keep it safe.

Don’t feel too bad for this collector. He, or anyone else who wants to fill their living room with stolen heritage, could buy decorations like a wooden panel that once decorated Kathmandu’s shrine of Kumari, the country’s living goddess, or two stone sculptures of kneeling devotees from monasteries in Kathmandu—just three of the artworks currently on offer from a single U.K.-based gallery. The market for antiquities from around the world remains robust. Collectors seemingly ignore the fact that their purchases help fund those who deal in looted antiquities, including organized crime and violent extremist organizations.

The work of scholars who photographed sculptures in Nepal in the 1970s and 1980s, rightly fearing that they were at risk of theft, has proven crucial to the contemporary activists who are using museum collections databases, auction listings, and even scanning the backgrounds of snapshots of art collectors to find stolen works. But what about the art that was stolen without ever being photographed? Many of the valley’s smaller, but still precious, artworks were taken before the documentation effort began. Some were even kept from view deliberately, hidden in temple storerooms to protect them from thieves—but in vain.

In 591 CE, a Buddhist nun named Parisuddhamati gave an exquisite bronze Buddha to a monastery in Patan, Nepal. This Buddha is now in the Cleveland Museum of Art. The ancient monastery Parisuddhamati honored is named in a detailed inscription on the sculpture’s base, but its exact location in the city is unknown. The Buddha could have been in one of the city’s other religious communities or might have been worshipped in a private home at the time of its theft, some time prior to its arrival in Cleveland in 1968. The specifics of that theft will likely never be recovered. Does that mean it should remain in the United States? The 20 collectors who have so far contacted the Nepal Heritage Recovery Campaign (an organization of activists seeking repatriations on whose advisory committee I serve), asking for advice on returning Nepali art in their possession, seem to agree that the absence of proof does not justify the retention of stolen art.

The sculpture of a cojoined Vishnu and Lakshmi will be the first sacred artwork to go back to its shrine after a sojourn abroad (the others have gone into museums). But Nepalis have practice reinstalling their deities. Over the centuries, major earthquakes like the one in 2015 shook down the country’s temples. But the cult statues’ metal or hard stone, and the tough wood of the carved beams, survived the collapse of the surrounding brick walls. These artworks, as delicate as they might seem, have lived through centuries of disasters. The global market for antiquities may have been the most destructive so far—but it might yet be overcome.