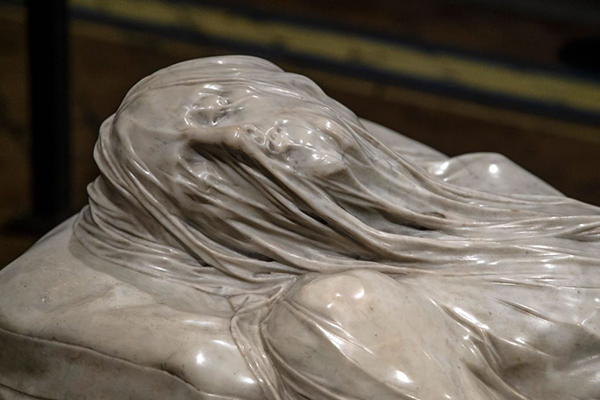 The Veiled Christ inside the Sansevero Chapel in Naples, Italy. Photo by Ivan Romano/Getty Images.

The director of the Sansevero Chapel Museum in Naples, Fabrizio Masucci, says museums should not be forced to bar any visitors.

Fabrizio Masucci, the director of the Sansevero Chapel Museum in Naples, has resigned from his post in protest against Italy’s new state mandate requiring all museum visitors to show proof of coronavirus vaccinations.

Italy introduced its new “green pass” requirements today, August 6. The rules require people to show digital certificates proving they have had at least one dose of the vaccine, or have tested negative for the virus within 48 hours before they can enter restaurants, cinemas, museums, and indoor sporting events. Italy is the second European country to require such proof. France introduced its equivalent law earlier this week.

Masucci, who was the museum’s director for 10 years, said in an open letter that his decision was driven by his conscience, adding that the government was exploiting cultural institutions to force vaccinations.

“I would like to calmly remind you that museums are by their very vocation places of inclusion and that equal access to art and culture [is] a right of all,” he said.

Masucci, who says he does not oppose vaccines, also listed a litany of Covid-related safety restrictions, including mask-wearing and reduced capacities, that the museum already had in place.

He also cited unnamed studies suggesting that of all public spaces, museums carried the lowest risks of contagion.

The museum’s board has named Maria Alessandra Masucci, a lawyer, and former board member, as director. In a statement, it thanked Masucci for his “dedication and professionalism.” He will remain on the institution’s board.