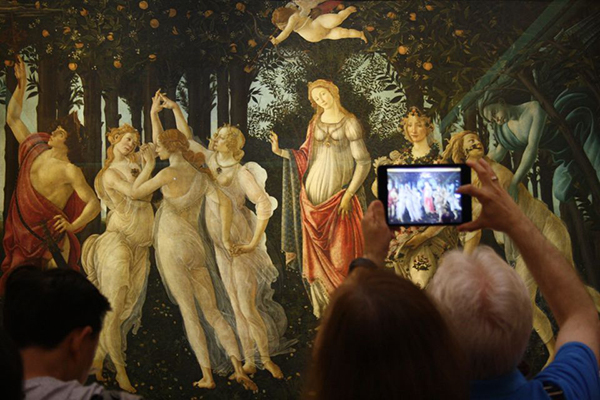 The Uffizi will employ a queue-cutting algorithm to regulate flow of visitors © Dim 7.

James Imam, Italian museums start to reopen from today after €55bn lifeline from government, The Art Newspaper, 18 May 2020

Italy’s museums have taken a financial blow over the past 70 days of closure, but the government threw them a lifeline with measures included in a €55bn “Decreto Rilancio” (relaunch decree) national spending package announced on Wednesday. There was more good news over the weekend. Museums had been told they may be able to reopen from today, and, on Saturday evening, Culture Minister Dario Franceschini gave the green light.

But Milan’s plan to stagger the reopening of its civic museums from tomorrow were dashed at the last minute. Lombardy President Attilio Fontana blocked Franceschini’s decision for museums on Saturday, only to change his mind following discussions with other regional presidents that evening, reports the Corriere della Sera. By then, Filippo Del Corno, the city’s top culture official, had already withdrawn the plan.

Rome’s Capitoline Museums and Turin’s Castello di Rivoli will open from tomorrow and Venice’s civic museums starting this weekend, but a financial black hole of €190m in Florence’s coffers means the city cannot afford to open its civic museums. Of the national galleries with special autonomy, Naples’s Museo e Real Bosco di Capodimonte and Rome’s Galleria Borghese will open today and tomorrow respectively. Both the Pinacoteca di Brera in Milan—which will record more than €2m in lost revenue in 2020, the director James Bradburne tells The Art Newspaper—and the Uffizi in Florence are expected to announce opening schedules over the coming days.

Necessary reductions in visitor numbers that will cause further losses in ticket sales mean the Decreto Rilancio is timely. Measures include a €210m emergency fund covering bookshops, publishing companies and arts oganisations for cancelled events and exhibitions, €100m to support state museums for losses in ticket sales, and a €100m “Culture Fund” providing cultural businesses with long-term loans for investment in physical structures and cultural production in 2020-21.

The fund was born from an appeal by journalist Pierluigi Battista published in the Corriere della Sera on 26 March. Umberto Croppi, the director of the Federculture advocacy group, told Artribune last week the fund will be a useful finance tool, but expressed regret it will be used for investments rather than to provide much-needed liquidity.

The fund will probably not be big enough to cover the whole sector, said Federculture’s president Andrea Cancellato in yesterday’s Corriere. Meanwhile, museum directors are awaiting formalisation of the decree to understand how they will benefit. According to Schmidt, Italy’s “more than 470 state museums which [do] not generate enough income to cover their costs” are more likely than the profitable Uffizi to benefit.

Big museums like the Uffizi, which has already recorded over €10m in losses, “have broad enough shoulders to take the blow,” he previously told l’Espresso.

Those interviewed said the pause is a chance to rethink funding and organisational models. Sylvain Bellenger, the director of Capodimonte, says “public and the private organisations are obliged to work with one another for the future of society.” Bradburne says museums’ operating costs have been “pared down to the bone”, but that Brera will seek not to increase its dependency on public funds. Reduced visitor numbers are “not necessarily a bad thing”, he says. “ I can still remember a world before mass tourism and over-crowded museums.”

See also: https://www.museumsassociation.org/museums-journal/news/english-museums-to-stay-closed-until-at-least-july
Positions Vacant » View All
» Publishing Assistant Manager – NGA
» Sector Services Officer – Te Papa
Latest News » View All
Untapped & Lost treasures: The quest
to save classic Aust books from extinction Read more.
Met Dir Max Hollein to add CE to his role
as Daniel H. Weiss steps down in June 2023 Read more.
Facts mostly don’t change people’s minds
but trust, honesty & mtg people might Read more.
HTSA reveal concept for Adelaide Museum
of SA History – at this stage “illustrative” Read more.
Te Au | The Current – Te Papa nature debate
“New Zealand is not a theme park” Read more.
Top +
Council of Australasian Museum Directors c/o Mr Brian Oldman, South Australian Museum PO Box 234 Adelaide, South Australia 5001 Australia, © CAMD 2022
Copyright: All information and resources provided on this website remain the copyright of the Council of Australasian Museum Directors. Permission is granted for viewing and downloading for personal and not for profit purposes. Those wishing to reproduce any materials for commercial, educational or other uses are requested to contact us.
Disclaimer: The content of this website is provided for information purposes only and is not intended as a substitute for professional advice. No claim is made as to the accuracy or authenticity of the content of the website. The Council of Australasian Museum Directors does not accept any liability to any person for the information or advice (or the use of such information or advice) which is provided on this website. The information on our website is provided on the basis that all persons accessing the site undertake responsibility for assessing the relevance and accuracy of its content. No responsibility is taken for any information or services which may appear on any linked web sites. Hostgator.
.