You are here: Home » Articles filed under: 'News' » Article: 'Italy appoints 13 “super-directors” with' 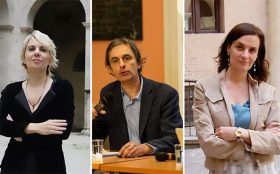 Edith Gabrielli (left) and Francesca Cappelletti (right) are two of the six women hired while Stéphane Verger (centre) is the only foreigner Verger: © Romain Étienne, Item, 2016.

The Italian culture ministry has appointed new directors at 13 museums and heritage sites across the country, putting in place mainly Italian-born candidates after years of seeking foreign experts to head Italy’s most prestigious institutions. Only one of the new directors is foreign; Stéphane Verger, who has been appointed to the Museo Nazionale Romano, is French. Six of the 13 appointments are women.

The selection of the new directors (full list below) was overseen by an international commission which included Gabriele Finaldi, the director of London’s National Gallery. “[Culture minister] Dario Franceschini chose the directors of the three first-tier museums: Galleria Borghese, Museo Nazionale Romano, Vittoriano and Palazzo Venezia,” says a ministry statement.

The move is part of the Italian government’s drive to recruit so-called “super-directors” with experience of fundraising as well as scholarly credentials. Crucially this shift, which gave museums greater autonomy, was set in motion in 2015 under Franceschini when the centrist government hoped to overturn the image of outdated bureaucracy associated with Italian institutions by appointing foreign museum chiefs.

Eike Schmidt, formerly the head of decorative arts at the Minneapolis Institute of Art, was subsequently appointed head of the Uffizi Galleries in Florence. Last year Schmidt pulled out of moving to Vienna to fill the post of director of the Kunsthistorisches Museum, opting instead to remain in Florence.

Other foreign chiefs have departed in the meantime, notably the Austrian curator Peter Assmann, who resigned as head of the Palazzo Ducale in Mantua and took up a new post as head of the Austrian National Museum in Vienna. Last year, the former culture minister Alberto Bonisoli, a member of the populist Five Star Movement, announced plans to appoint more Italians to leadership positions in the country’s institutions. Franceschini was reinstated as the culture minister last September when a coalition government was sworn in.

Francesca Cappelletti at the Borghese Gallery in Rome

Edith Gabrielli at the Vittoriano complex and Palazzo Venezia

Luigi Gallo at the National Gallery of the Marche in Urbino

Francesco Muscolino at the National Archaeological Museum of Cagliari

Annamaria Mauro at the National Museum of Matera

Stefano L’Occaso at the Palazzo Ducale in Mantua

Mario Epifani at the Royal Palace of Naples

Alessandro D’Alessio at the Archaeological Park of Ancient Ostia

Maria Luisa Pacelli at the National Art Gallery of Bologna

Positions Vacant » View All
» Training Officer – Sydney Living Museums
» Head of Digital Engagement & Insight – ANMM
Latest News » View All
CM considers future of Nigerian taonga
- assessing & prioritise repatriations Read more.
NAA’s national collections on brink
& Australia’s history at risk Read more.
Frog love songs reveal amphibian decline
AM & Frog ID explore habitat modification Read more.
QM explains mystery: ‘Giant moth invasion’
of Mt Cotton State School's surprise visitor Read more.
ANMM Haenyeo (sea women) exhibition
Hyungsun Kim's S Korean divers portraits Read more.
Top +
Council of Australasian Museum Directors, c/o Ms Daryl Karp, Museum of Australian Democracy at Old Parliament House PO Box 3934 Manuka, Australian Capital Territory 2603 Australia, © CAMD 2021
Copyright: All information and resources provided on this website remain the copyright of the Council of Australasian Museum Directors. Permission is granted for viewing and downloading for personal and not for profit purposes. Those wishing to reproduce any materials for commercial, educational or other uses are requested to contact us.
Disclaimer: The content of this website is provided for information purposes only and is not intended as a substitute for professional advice. No claim is made as to the accuracy or authenticity of the content of the website. The Council of Australasian Museum Directors does not accept any liability to any person for the information or advice (or the use of such information or advice) which is provided on this website. The information on our website is provided on the basis that all persons accessing the site undertake responsibility for assessing the relevance and accuracy of its content. No responsibility is taken for any information or services which may appear on any linked web sites. Hostgator.
.