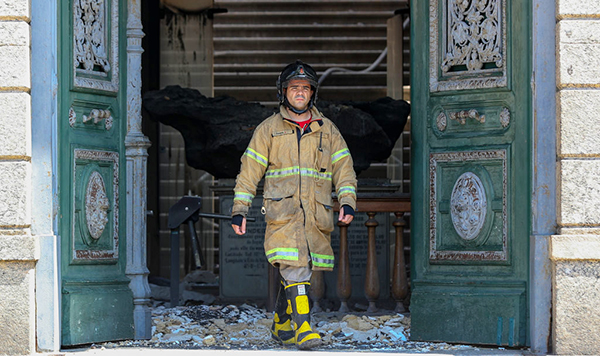 A firefighter walks inside the National Museum of Brazil. Photo: Buda Mendes/Getty Images.

Italian experts will travel to Rio de Janeiro to assist in the restoration of artifacts salvaged from the museum’s ruins.

Italy has stepped forward to help Brazil’s National Museum get back on its feet after a fire destroyed its building and millions of artifacts and specimens in its historic collection. Italian officials will send hundreds of ancient artifacts on long-term loan to Rio de Janeiro, as well as provide expert assistance to help restore salvaged objects.

Speaking in Rio de Janeiro on Wednesday, Italy’s undersecretary for cultural heritage, Lucia Borgonzoni, announced that it would make 2,000 loans available from the National Archaeological Museum of Naples, and the site of Herculaneum nearby, according to the Rio Times.

The offer of expertise and 20-year loans comes shortly after the director of Brazil’s National Museum, Alexander Kellner, traveled to Europe to gain support and raise funds to rebuild the museum after the fire last September devastated its the 200-year-old building. Around 90 percent of the collection is estimated to have been lost or damaged. The most priceless item in the collection, the remains of Lucia, the oldest human remains in the Americas, was luckily retrieved shortly after the fire. The National Museum was the largest natural history museum in South America, and one of the oldest scientific institutions in Brazil.

The loans from Italy include ancient Roman marble statues and paintings on plaster. The first works are due to arrive in 2020. They will be exhibited at the Italian Cultural Institute and the Italian consulate in Rio until the national museum is rebuilt. “We can lend a hand in this recovery phase to save as many things as we can save,” Borgonzoni said, according to ANSA.

International help is sorely needed by the beleaguered, skeletal museum. In May, Kellner said the institution urgently needed $250,000 in order to “be able to breathe.” The German government gave money in the immediate aftermath last year and pledged further assistance for the rebuild.

The Brazil-Italy partnership also seeks to re-establish an important part of the Brazilian collection that has a special link with Italy. The 19th-century Sicilian princess, Teresa Cristina, was the wife of Emperor Dom Pedro II of Brazil. She brought hundreds of items from the Herculaneum archaeological site with her when she moved to Brazil. The artifacts eventually became part of the permanent collection of the National Museum.

Elisabetta Canna, a conservator at the Herculaneum archaeological park, who is a world leader in restoration, was part of the Italian delegation in Brazil this week. She will take a leading role in the monumental task of restoring archaeological pieces salvaged from the fire and retrieving still-buried items, including, hopefully, those from Cristina’s trove.

“Each piece is like a patient, it is necessary to take into account a series of factors to define how to act. Even the water used to put out the fire is one more element that can cause damages,” Canna told the Brazilian news site Oglobo. “A tragedy like the one that struck the museum could be transformed into an opportunity to raise public awareness about the preservation of these collections,” she said.