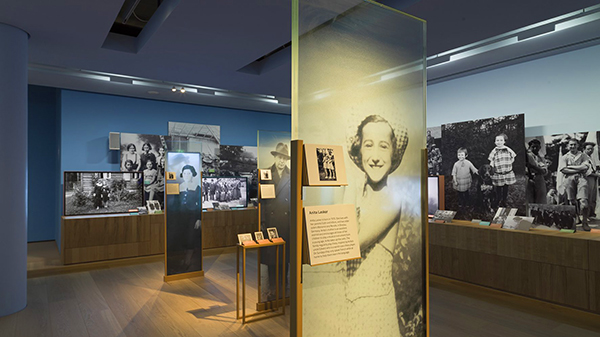 The Holocaust Galleries at IWM London open on 20 October © IWM.

The £30.7m project has taken nearly seven years to complete.

Two exhibitions dedicated to the second world war and the Holocaust open at IWM London on 20 October.

The £30.7m project follows the development of Imperial War Museums’ (IWM) First World War Galleries, which opened in 2014 alongside a new atrium feature large-objects such as a Harrier, Spitfire and a V-1 rocket.

IWM director-general Diane Lees said: “It has never been more important to learn about the second world war and the Holocaust and to understand this defining period of the 20th century, which dramatically shaped the world we live in today.

“Though this conflict will soon pass out of living memory, leaving us without the first-hand testimony of its veterans, eyewitnesses and survivors, IWM will ensure that the experiences of those generations are never forgotten through our incredible new galleries, which have been almost seven years in the making.”

A key aim of the Holocaust Galleries is to show that understanding history is an essential step to combating prejudices still present in today’s society, such as antisemitism. The displays feature individual stories from some of the six million Jewish people murdered in the Holocaust. These are told through photos, books, artworks and letters, and personal objects ranging from jewellery and clothing to toys and keepsakes.

The Holocaust Galleries have been designed by Casson Mann© IWM.

The Holocaust Galleries have moved away from the dark spaces of IWM’s previous exhibition about the subject. Instead, the design by Casson Mann uses colour and light to show how the holocaust was planned and carried out in “plain sight” in the centre of Europe.

Objects on display for the first time include a teddy bear owned by Ruth Neumeyer, who came to the UK on the Kindertransport with her brother Raimund from her hometown of Dachau.

Another item that has never been displayed before is a dress made from parachute silk that was worn by former Belsen internee Gena Turgel for her wedding to British soldier Sergeant Norman Turgel in October 1945. Norman was part of the forces that liberated Belsen Concentration Camp in April, where he met Gena shortly afterwards.

The Second World War Galleries, designed by Ralph Applebaum Associates, also feature lots of personal stories in the displays. Key aims include helping visitors understand the global nature of the war and debunking the myth that Britain stood alone during the conflict.

Key objects include the first piece of the wreckage of the USS Arizona to leave the US. The second world war battleship exploded after suffering direct hits during the Japanese attack on Pearl Harbor on 7 December 1941.

Other objects on display for the first time include a wedding scarf belonging to Raminder Singh, who experienced the partition of India shortly after marrying her war-hero husband in April 1947. Parkash Singh served in the Indian Army during the war and was awarded the Victoria Cross.

Also on display is a portrait of Muhammed Akbar Khan, one of the first soldiers from the British empire to see fighting. He commanded one of four Indian Army Animal Transport Companies sent to France in 1939 to provide transport with mules.

Visitors can see a Thermos case belonging to Thomas Andi, a seaman from Nigeria who worked on ships transporting commercial goods. German raiders attacked his ship in the Atlantic ocean on 18 December 1940 and he was captured and held at a prisoner of war camp in Germany, where he used the flask.

How can museums change lives in a post-pandemic world? Our inspiring conference programme will explore the ideas and vision we need to not only survive, but to thrive in the future. Online places start from just £45, or attend in person for as little as £190.

Join us in Liverpool this November