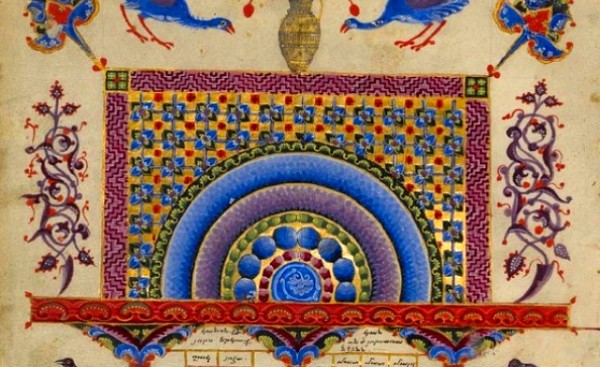 The institution will get to keep the brilliantly illuminated gospel pages in its collection after legal settlement.

A long-running legal battle between the J. Paul Getty Museum in Los Angeles and the US arm of the Armenian Apostolic Church over the ownership of a group of 13th-century manuscript pages has ended with a compromise. The Getty has agreed to acknowledge that the church is the rightful owner of the eight brilliantly illustrated pages. The church, in turn, has pledged to donate the pages to the museum. The manuscript pages have been in the Getty’s collection since 1994, when the museum bought them from an Armenian American family.

Lee Boyd, an attorney for the church, told the Los Angeles Times on Monday that the settlement represents the first restitution of art from the Armenian genocide. The Getty agreed to pay all legal fees associated with the lawsuit, which the church filed in 2010, according to the newspaper.

The pages, called the Canon Tables, comprise the table of contents for an Armenian Bible known as the Zeyt’un Gospels. They are the earliest signed work of T’oros Roslin, the most celebrated illuminator and scribe in Armenia in the 13th century. Armenia established an independent church in the fourth century, and the Gospels are among its most sumptuously illustrated texts.

The rest of the bible is in the collection of the Mesrop Mashtots Institute of Ancient Manuscripts in Yerevan, Armenia. The eight pages in the Getty’s collection were illegally separated from the rest of the book between 1915 and 1918 amid the chaos caused by the Armenian genocide, according to the church. (The Turkish government has never accepted the term “genocide” but has acknowledged that a large population of Christian Armenians died in a conflict with Ottoman soldiers during the First World War.)

Positions Vacant » View All
» Exhibition Experience Developer – Te Papa
» Operations & Science Centre Mgr – Otago Museum
Latest News » View All
IWM unveils second world war & Holocaust
galleries – 7 year project Read more.
Indigenous cultural heritage ‘at risk’
until new protection laws pass Read more.
MA Museums Change Lives Awards
2021 Shortlist announced Read more.
Tattooing as a cultural phenomenon & art
form – historic & current challenges Read more.
Oriel College’s retain & explain plaque for
Cecil Rhodes statue – what’s balance? Read more.
Top +
Council of Australasian Museum Directors, c/o Ms Daryl Karp, Museum of Australian Democracy at Old Parliament House PO Box 3934 Manuka, Australian Capital Territory 2603 Australia, © CAMD 2021
Copyright: All information and resources provided on this website remain the copyright of the Council of Australasian Museum Directors. Permission is granted for viewing and downloading for personal and not for profit purposes. Those wishing to reproduce any materials for commercial, educational or other uses are requested to contact us.
Disclaimer: The content of this website is provided for information purposes only and is not intended as a substitute for professional advice. No claim is made as to the accuracy or authenticity of the content of the website. The Council of Australasian Museum Directors does not accept any liability to any person for the information or advice (or the use of such information or advice) which is provided on this website. The information on our website is provided on the basis that all persons accessing the site undertake responsibility for assessing the relevance and accuracy of its content. No responsibility is taken for any information or services which may appear on any linked web sites. Hostgator.
.