The summer season is once again upon us, and for many people that means that it’s time to take a well-earned break. For New Zealanders in the 19th and early 20th centuries, however, summer was no time to rest. History curator Katie Cooper examines the summertime activities of jam-making and bottling. 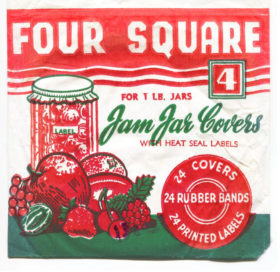 Four Square jam jar covers, from the 1950s or early 1960s. From the personal collection of Darian Zam. Reproduced with permission.

The old saying goes that you should make hay while the sun shines, but in many 19th- and 20th-century households that was just the start of the work that needed to happen while the weather was fine.

Summer was a busy time both indoors and out, and from December to March one of the most important tasks for the homemaker was jam-making and bottling: transforming a rich profusion of home-grown fruits and vegetables into delicious preserves.

Nineteenth-century immigrants brought these techniques with them, although preserving processes did change gradually over the 20th century as new equipment was introduced and micro-organisms became more widely understood.

Waste not, want not

Until the 1960s preserving was ‘virtually a home industry’ in many New Zealand households, and it was a source of great pride and satisfaction to have jars of jams, fruits, and pickles safely stored away for winter use.

Anne Earncliff Brown, of Canterbury, wrote in 1939 that she always felt a little thrill when her shelves were full of bottled fruits.

‘Within those glowing glasses there seems also trapped sunshine. In the gold of apricots or big yellow egg plums, lingers surely the glamour of the gathering, some languor of the honeyed fragrance of the blossoms nearby.’

Although this is a fanciful description of the task, preserving also had important prosaic functions. Bottling and jam-making were a safeguard against seasonal food shortages, and a prudent financial measure during periods of economic strain.

A 1932 article in the New Zealand Farm and Home magazine, for example, suggested that ‘the kitchen garden robbed the slump [the Great Depression] of a third of its terrors,’ because the garden and orchard provided some level of self-sufficiency in the absence of cash.