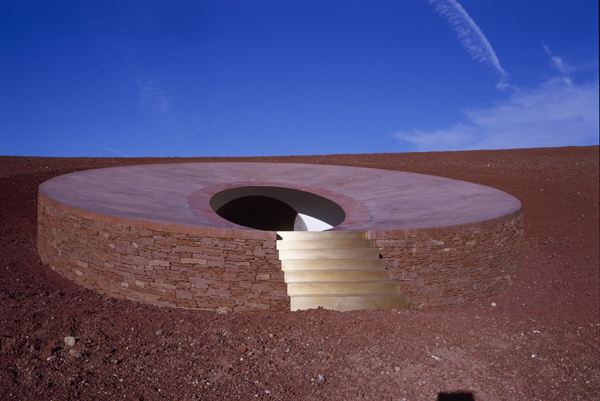 American light and space artist James Turrell’s best-known work, Roden Crater, is now set to open to the public within the next few years thanks to a series of partnerships and new funding. Part of the additional funds includes a $10 million donation from Kanye West that would allow the project to expand and open within the next five years. Only a small group of people have experienced the crater, and the new funding will jump-start the updated master plan, which includes a restaurant, visitor’s center, cabins, and a “light-spa.”

Roden Crater is located in the Painted Desert region of Northern Arizona, and has been under construction for 45 years. In the early 1970s, Turrell spent the night in the bowl of the extinct volcano in Arizona. Since then, he has set about buying and turning the crater into a celestial observatory connected to a series of spaces and installations. After acquiring the dormant cinder cone in 1977, Turrell fashioned Roden Crater into a site containing tunnels and apertures that open onto the sky, capturing light directly from the sun in daylight hours, and the planets and stars at night. As one of the world’s most respected and well-known artists, Turrell received funding through a series of partnerships first detailed by the Wall Street Journal.

The nonprofit Skystone Foundation is partnering with Arizona State University and the Los Angeles County Museum of Art to back the project. ASU explained that a $2 million grant is helping the school develop an interdisciplinary program of field classes focused on the crater, ranging from design classes astronomy and geology. In addition, Kanye West made a $10 million donation to the project after visiting the site in December.

Constructed to last for centuries to come, Roden Crater’s major phase of construction included the movement of over 1.3 million cubic yards of earth to shape the Crater Bowl and the construction of the 854′ East Tunnel. Six spaces were completed, including two of the most difficult, the shaping of the Crater Bowl and the Alpha (East) Tunnel. When complete, the project will contain 21 viewing spaces and six tunnels.

As construction on Roden Crater is ongoing, it is presently closed to the public.