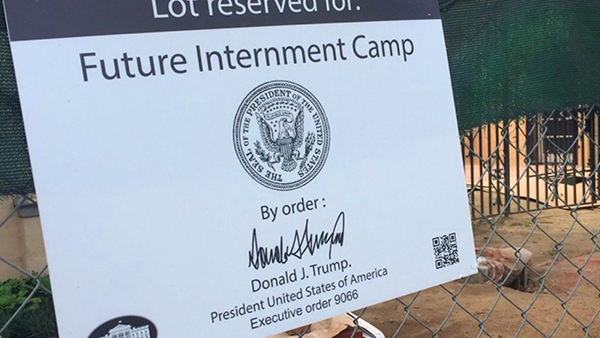 In the wake of the 2016 presidential election, I came across a picture (above) of a futurist installation by LA street artist Plastic Jesus. This bit of immersive fiction warned of a future in which America might repeat one of the most regrettable episodes of our history—the incarceration of Japanese Americans after the bombing of Pearl Harbor. His scenario proved to be smack in the middle of the Cone of Plausibility: this spring, news broke that migrant children might be detained at Fort Sill1, a site in Oklahoma which served as a temporary detention facility during WWII. Today on the blog, Ann Burroughs, President and CEO of the Japanese American National Museum, relates how the museum is calling on our country to learn from its past in order to build a future of social justice.

On June 11, 2019, Time Magazine broke the news that the federal government was proposing to use Fort Sill as a detainment center for migrant children who have fled their homes in countries south of the United States to seek asylum in this nation. The Japanese American National Museum, without hesitation, issued a statementopposing this action.

A week later, JANM was one of several community organizations that jointly denounced the use of Fort Sill and called for the public to participate in a peaceful protest, which the museum helped to organize, on the JANM plaza on June 27. More than 750 individuals came to that protest, where several of the museum’s strategic priorities were brought to life and the principles of democracy were reinforced.

These proactive responses to a social and human rights issue were a direct result of JANM’s new strategic direction to take firm positions in support of its mission rather than play a passive or neutral role. In its most recent business plan, the JANM Board of Trustees articulated the priority to amplify the unique lessons of our history to combat rising divisiveness and discrimination and to shape a future that is based on social justice and a vibrant culture of democracy. This priority, as well as other parts of our plan, were shaped by a tragic chapter of US history.

On February 19, 1942, President Franklin D. Roosevelt signed Executive Order 9066, which ultimately resulted in the forced removal and incarceration of 120,000 men, women, and children of Japanese ancestry for the duration of World War II. Very few people or groups spoke out against the constitutional, civil liberties, and human rights violations that Japanese Americans endured. It would be forty years before the Commission on Wartime Relocation and Internment of Civilians found that the policy of exclusion, removal, and detention was systematically conducted by the United States government despite the fact that no evidence of espionage or sabotage was documented, and there was no direct military necessity for detention. Further, the broad historical causes for the policy were found to be “race prejudice, war hysteria and a failure of political leadership.” These findings ultimately contributed to the United States government issuing a formal apology and paying reparations to the Japanese Americans it had forcibly removed to concentration camps—the tangible results of the bipartisan passage of the Civil Liberties Act of 1988.

In 1992, the Japanese American National Museum opened its doors to ensure that this history is never forgotten and more importantly, that it is never repeated. Because of that fundamental underpinning of the institution, with a mission to promote understanding and appreciation of America’s ethnic and cultural diversity by sharing the Japanese American experience, we see it as our responsibility to speak out, firmly, when issues of civil rights and social justice arise.

The statements and actions related to Fort Sill are the most recent undertaken by JANM, but the museum’s vocal opposition to discriminatory rhetoric, policies, and practices is long-standing. This was perhaps most visible in the wake of the terrorist attacks of September 11, 2001.

On September 27, 2001, the Japanese American National Museum issued a public statement citing the historic parallels between the responses to the recent attacks and to the bombing of Pearl Harbor and lauding political leaders who differentiated between those who committed heinous crimes and those who were “guilty” only of looking like “the enemy.” President George W. Bush, Attorney General John Ashcroft, Transportation Secretary Norman Mineta, and members of Congress made it clear that the harassment and assault of Muslims, Arab Americans, and South Asian Americans was not to be tolerated by our government. No doubt Secretary Mineta’s personal experience as a Japanese American camp inmate during World War II and his condemnation of random discrimination against Muslims and Arab-Americans affected the conscience of the Bush administration and helped shape the government’s response to the terrorist attacks.

In the weeks and months after 9/11, many Japanese American community organizations, including JANM, met and exchanged ideas with Arab American organizations throughout the country, providing the kind of public support that was lacking for Japanese Americans in 1942. Our institution and our community made it clear to Arab Americans that they were not abandoned. We continue to stand together with them as Americans.

Since that time, JANM has spoken out on numerous occasions, recalling the tragic and shameful history of the 1940s, drawing parallels to contemporary issues, and refusing to allow history to repeat itself. You can see an example from June 2017 here, another from June 2018 here, and one from September 2018 here.

While not everyone agrees with JANM’s evolution into a more explicitly vocal participant in current events, we take very seriously what it means to live within and contribute to a democratic society. Former US Senator Daniel K. Inouye, who was integral to the founding of the museum, very much envisioned JANM to be a place that illustrates democracy in action.  I see the museum as guided by that vision when we say a policy is inhumane, that current rhetoric is dangerous, and that racist practices must be abolished.

We are fortunate to have among our current leaders two highly respected and outspoken individuals who have encouraged this path: the previously mentioned former Congressman, Secretary of Commerce, and Secretary of Transportation Norman Y. Mineta; and actor and activist George Takei. They and the rest of our leadership understand that while there may be some individuals who are alienated by our stances, there are far more who are and will be drawn to us because of those stances.

It is our perspective that the unique history of Japanese Americans can and should be leveraged to advance the commonality of all people today and to take on issues that compromise our democratic values and principles. JANM recognizes the need to animate the lessons of history to combat rising divisiveness and discrimination and we are committed to being a museum that take firm positions and purposefully works against adverse efforts targeting any group based on prejudice or race. It’s what our founders intended and it is our responsibility to act accordingly.

1 On July 25, Senator Jim Inhofe (R-Okla.) announced that plans to house detained migrant children at the Fort Sill U.S. Army base has been halted.

Ann Burroughs is the President and CEO of the Japanese American National Museum (JANM). For over 25 years, Burroughs has worked with leaders, organizations, and networks in the USA and abroad to promote social justice and human rights. Recently, she became Chair of the Japanese American Confinement Sites Consortium. Burroughs was elected Chair of the Global Assembly of Amnesty International in 2018 and is the immediate past Chair of the Board of Directors of Amnesty International USA. Her life-long commitment to racial and social justice was shaped by her experience as a young activist in her native South Africa where she was jailed as a political prisoner for her opposition to apartheid.