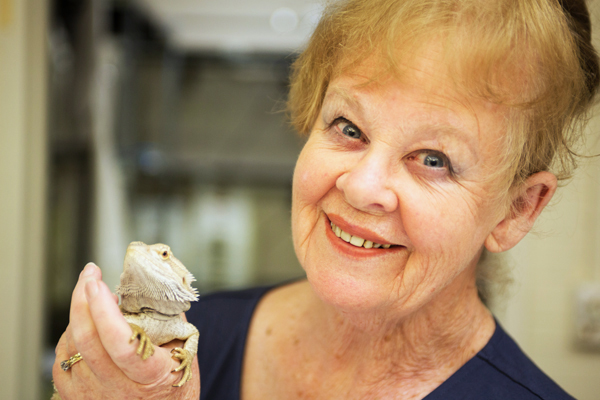 Four outstanding scientists and two extraordinary science teachers comprise the 2017 recipients of the Prime Minister’s Prizes for Science, Australia’s most prestigious and highly regarded awards in the field. Jeff Glorfeld profiles the winners.

Light-emitting nano-particles, toothpaste and kangaroo genomes are among the subjects to which Australia’s best and brightest scientists and educators have turned their attention. Four researchers and two teachers have each been recognized for their achievements in this year’s Prime Minister’s Prizes for Science, the country’s peak science awards.

Eric Reynolds
In what might be the ultimate validation for a research scientist, Professor Laureate Eric Reynolds some 30 years ago discovered a protein in dairy milk that repairs and strengthens teeth. Today, that protein, sold as Recaldent, is used by millions of people every day. Incorporated into products such as chewing gum and toothpaste, Recaldent is estimated to have saved more than $12 billion in dental treatment costs worldwide, while generating sales of more than $2 billion.

Professor Reynolds, the 2017 recipient of the $250,000 Prime Minister’s Prize for Innovation, now leads the University of Melbourne’s dental school and works with businesses from around the world to create new products to improve oral health.

According to a recent US study, children using a combination of Recaldent products experienced no tooth decay at all.

At present, Professor Reynolds is part of a team developing a test and vaccine for treating severe gum disease. “Oral diseases are the most prevalent diseases of humankind,” he says. One in four Australians have cavities or gum disease, and the cost of treatment in Australia alone is more than $8 billion.

Jenny Graves
Professor Jenny Graves, the winner of this year’s $250,000 Prime Minister’s Prize for Science, has transformed our understanding of how humans and all vertebrate animals evolved and function. She has made vital contributions to our knowledge of mammalian genome organisation and evolution, focusing on the genetic diversity of Australia’s unique animals and their highly conserved structures and processes.

Her studies of kangaroos and platypus, bearded dragons and Tasmanian devils have, shed light on the organisation, function and evolution of mammalian genomes, and led to influential new theories of the origin and evolution of human sex chromosomes and sex determining genes.

She has pioneered the fields of comparative genomics and epigenetics globally and been the driving force behind sequencing the first marsupial and monotreme genomes.

She has been a role model for girls and women in science, and trained hundreds of students and research assistants, including more than 50 genome scientists.

Jian Yang
University of Queensland Professor Jian Yang has created pioneering new techniques to unravel the complexity of the human genome and help researchers find the genetic factors behind complex diseases, opening the way to new drugs and better genomic risk prediction, for which he receives the $50,000 Frank Fenner Prize for Life Scientist of the Year.

In linking studies of genetics, statistical modelling and large-scale data analysis, he developed methods and tools for analysing genomic variation, and showed that genetic variation in obesity, cognitive ability, and schizophrenia are attributable to many variants across the genome.

To understand the genetic relationships of complex traits and diseases requires the analysis of the genomes of vast numbers of people. Professor Jian’s work is giving researchers the tools necessary to understand such massive amounts of data. Thousands of geneticists around the world are already using software he has developed.

His research opens the way to a new wave of genomic analysis using tools he has developed and made available to the wider research community. It has opened up common ground in the studies of genetics, statistical modelling and data analysis.

Dayong Jin
“Seeing is believing” is a common phrase, but for doctors and scientists searching for cures for disease, the “seeing” isn’t always possible. Professor Dayong Jin is working to change that, for which he receives the $50,000 Malcolm McIntosh Prize for Physical Scientist of the Year.

Working with nanoparticles and photonics at the University of Technology Sydney, he has led a team that has developed new kinds of tools that enable researchers to see at the molecular level inside living cells. This makes it possible for the first time to observe the immune system at work, for example, or see how bacteria become resistant to antibiotics, and to find one cancer cell among millions of healthy cells.

Professor Jin believes researchers don’t have the tools they need to watch the processes of life at work, which hampers the development of fast, cost-effective ways to monitor patient health and detect problems before they become critical.

“Biologists want to be able to watch and follow individual molecules in living cells,” he says. “Then they could see exactly what’s happening step by step.”

To achieve these aims, he and his colleagues developed nanoparticles that emit light and can be directed to probe and find diseased cells, and then deliver drugs in precise dosages.

His developments have wider applications, including inks that thwart counterfeiting, and an optical safety system for motorcyclists.

Neil Bramsen
Neil Bramsen, assistant principal at Mount Ousley Public School in Wollongong, believes the study of science can work as a bridge to inspire learning in all areas of the curriculum. “It’s a way of hooking kids into learning,” he says. “We want kids to enjoy school. It’s got to be a balance of fun and learning.”

Mr Bramsen is the recipient of this year’s Prime Minister’s Prize for Excellence in Science Teaching in Primary Schools, in recognition of his innovative use of partnerships with scientists, the community and other schools to encourage students’ engagement with science.

He has partnered with the CSIRO’s national TeachWild program, a NASA-linked program, Cubes in Space, and others to help primary school-aged children find opportunities to engage with science and technology.

Brett McKay
As head science teacher at Kirrawee High School in south Sydney, Brett McKay has presided over a significant rise in the number of students enrolling in science classes. He has also promoted programs to encourage young women to study and consider careers in science.

As this year’s winner of the Prime Minister’s Prize for Excellence in Teaching in Secondary Schools, McKay says the teaching of science “is also about giving students a passion for science that they can use in everyday life, for example as electricians. If you’re literate in science, you can do whatever you want to.”

A crucial part of his efforts to advance the teaching of science is reaching out to the wider education community. He’s active in the Science Teachers’ Association of NSW, and has been involved in curriculum development, influencing state syllabus development and resourcing, and through a national pilot study of online learning.