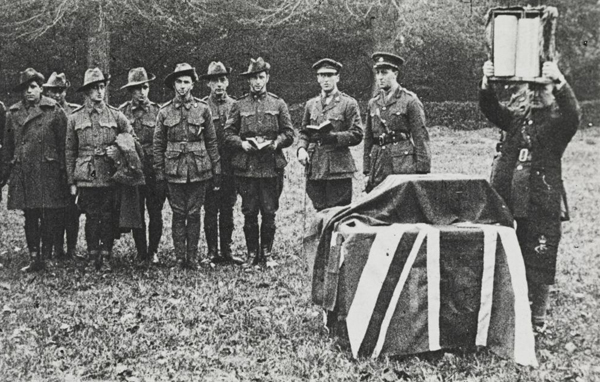 Chaplain Reverend David Freedman raises a Torah given to him by a congregation in Alexandria, Egypt, at a service in the field circa 1917. This scroll has become known as the ‘Anzac Torah’.

A new book by Mark Dapin chronicles the Outback’s rich history of Hebrew heroes – including the only Jewish military commander-in-chief outside of Israel.

From the shores of Gallipoli to the mountains of Afghanistan, Jews have distinguished themselves fighting for Australia. Now, “Jewish Anzacs” by Mark Dapin — the first book of its kind — explores their heroism.

“Anzac” refers to the Australian and New Zealand Army Corps of World War I, an outfit that earned lasting fame at the campaign for Gallipoli as they fought fiercely over the Turkish peninsula from 1915 through early 1916.

WWI occupies a significant portion of the book, including the story of General John Monash, who rose to commander-in-chief of the Australian army in 1918.

The only Jew outside Israel to command an army, Monash was “the most famous Jewish-Australian soldier of all time,” Dapin said.

In recent years, Australia has held centenary commemorations for WWI, including a 2014 ceremony marking the 100th anniversary of its outbreak.

Several events and exhibitions during this period have related to the Australian Jewish community, which at 112,000 represents 0.5 percent of the population and is the ninth-largest Jewish community in the world.

But “Jewish Anzacs” covers a much wider period, beginning when Australia was a British colony and its Jews fought in far-flung conflicts of the empire, and extending to the War on Terror. Included is the poignant story of commando Greg Sher, who was killed in Afghanistan in 2009, and is the most recent Australian Jew to die in combat.

Dapin’s book “is the first full history” of Jewish Anzacs, according to an email from Deborah Rechter, a consultant curator for the Jewish Museum of Australia and a scholarships and projects manager for the General Sir John Monash Foundation.

The British-born author is well-versed in military history. Dapin’s father, grandfather and great-grandfather all served, and his great-uncle died fighting in Flanders in 1914. His previous book, the novel “Spirit House,” explored Jewish World War II POWs held by Japan.

But writing an entire history of Jewish Anzacs proved challenging. “The Australian government never kept records of soldiers by religion,” Dapin said. “[Another] researcher called out every file in the Australian National Archives that he thought [represented] someone who was Jewish — the Cohens, Levis, Roses, Rosenbergs, Sterns, who put their religion as Jewish.”

But often, he said, Jewish service members “did not put [their religion] as Jewish. That’s what complicated things.”

According to Dapin’s research, 7,000 Australian Jews served in wars from the British Empire’s Sudan campaign of 1885 to the end of WWII. He estimated that 2,000 more have served in peacetime since then.

Dapin also interviewed Jewish service members such as Scott Leonard, a major in the reserves whose 20-year military career included a deployment in Iraq from 2007 to 2008.

“There were hundreds of rockets while I was there, all incredibly stressful,” Leonard said. “Few hit their target, but at least they made it hard for us to sleep and do our job.”

Yet Leonard and his fellow Jewish soldiers before him have long been doing their job under stressful conditions.