You are here: Home » Articles filed under: 'News' » Article: 'Jewish Diggers focus in Spirit of Anzac' 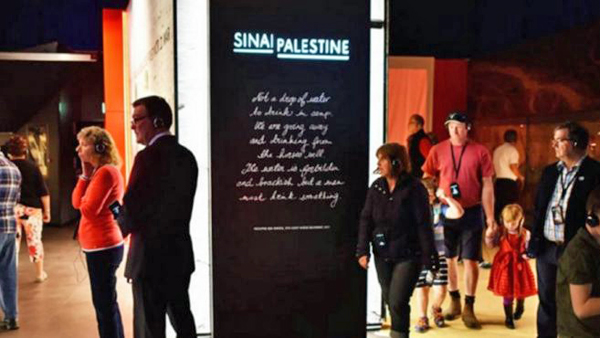 The Spirit of Anzac Centenary Experience travelling exhibition, which will be in Sydney from April 15-27. Source: Jewish News.

A section devoted to telling the stories of some of the almost 1600 Australian Jewish men and women who served in the Great War is being included in the Spirit of Anzac Centenary Experience, which will be on at Sydney’s International Convention Centre from April 15-27.

The travelling exhibition, which is free to enter, has visited more than 300,000 people at 23 locations around Australia, and is ending its two-year journey in Sydney in the lead-up to Anzac Day.

The exhibition features artefacts from the Australian War Memorial, and award-winning technology, to shed light on the lives and stories of Australian soldiers, sailors, airmen and nurses.

The Jewish section features information and photographs submitted for inclusion by Peter Allen, the national co-ordinator of the Centenary of Anzac Jewish Program.

There will be a display providing insights about several Jewish soldiers, footage from the DVD The First Jewish Anzacs and material from the book Jewish Anzacs by Mark Dapin, published earlier this month.

Allen told The AJN that one of the displays likely to be included is about a soldier very close to his heart – Private Joseph Hart.

Allen recalled how in 2009, when he read Private Hart’s mother’s letter in the national archives, he resolved that while in France for the re-interment of the Lost Diggers of Fromelles in 2010, he would search for headstone No.190 (30th Battalion).

Until then “it was the only identified grave for one of the 12 Jewish Diggers killed at Fromelles.

“We drove in ever-decreasing circles within the maze of narrow roads on the outskirts of La Chapelle-D’Armentières . . . so determined was I to find it,” Allen said.

“On the headstone, beneath the Australian Army Rising Sun symbol, there was a Magen David.

“I placed an Australian river stone and said Kaddish on behalf of his parents, Rachel and Victor.”

Other exhibition highlights include a daily Last Post ceremony, children’s activities and a series of talks by event ambassadors including the national chairman of the Saluting Monash Council, Tim Fischer, and Australian War Memorial director Dr Brendan Nelson.

Tickets are limited. They can be booked in advance at www.spiritofanzac.gov.au or by calling 1300 462 313.

Positions Vacant » View All
» Te Ao Māori roles – Canterbury Museum
» Producer, Public Art Program – Queensland Museum
Latest News » View All
SAM co-ordinating Insect Investigators
in regional schools in Qld, SA & WA Read more.
Te Papa funding preserving & digitising
Spencer Digby–Ronald Woolf photo archive Read more.
MAAS Powerhouse Parramatta contract let
LendLease building 6-stars to open 2024 Read more.
New Gold Mtn filmed @ SHM to show on SBS
Chinese miners’ voice from Vic Goldfields Read more.
AMaGA 2022 Natl Conf WAM Boola Bardip
Call for abstracts open to 30 Sept 2021 Read more.
Top +
Council of Australasian Museum Directors, c/o Ms Daryl Karp, Museum of Australian Democracy at Old Parliament House PO Box 3934 Manuka, Australian Capital Territory 2603 Australia, © CAMD 2021
Copyright: All information and resources provided on this website remain the copyright of the Council of Australasian Museum Directors. Permission is granted for viewing and downloading for personal and not for profit purposes. Those wishing to reproduce any materials for commercial, educational or other uses are requested to contact us.
Disclaimer: The content of this website is provided for information purposes only and is not intended as a substitute for professional advice. No claim is made as to the accuracy or authenticity of the content of the website. The Council of Australasian Museum Directors does not accept any liability to any person for the information or advice (or the use of such information or advice) which is provided on this website. The information on our website is provided on the basis that all persons accessing the site undertake responsibility for assessing the relevance and accuracy of its content. No responsibility is taken for any information or services which may appear on any linked web sites. Hostgator.
.