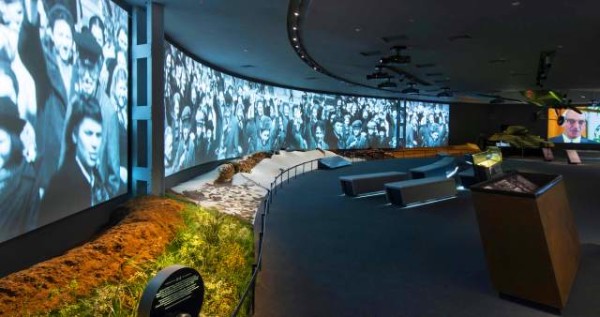 Today, post-Communist Europe is experiencing a museum boom. Countries are trying to consolidate a collective identity in museums that tell their nation’s story in a way that was not possible under communism. Jewish museums and Holocaust memorials offer not only histories of Jewish communities in a given town or country, but also a perspective on the place of those communities within a larger national history and a country’s self-understanding. For decades, the subject of Jewish history and memory was largely off-limits in the Eastern bloc. However, since the fall of communism there has been a revival of public Jewish culture and institutions in the region. New museums, memorials and education centers have emerged all across Central and Eastern Europe as well as in the former Soviet Union.

One of the most ambitious is the Jewish Museum and Tolerance Center in Moscow, which opened in 2012. A multimillion dollar endeavor, the museum is supported by Jewish donors as well as by non-Jewish benefactors, foundations and local authorities. Its core exhibitions, which rely on the expertise of both local and international scholars and designers, offer an affecting multimedia narrative of Russian Jewish history. In the short time since it was established, Moscow’s Jewish Museum and Tolerance Center has become part of the international museum scene and a tourist attraction, with 85,000 visitors in 2014.

Major museums are usually expensive undertakings, involving legislation, fundraising and planning, and as such they reflect a society’s agenda. The elements of a museum — architecture, curatorial choices and exhibit design — all convey its political narrative. History museums are cultural documents offering a glimpse of the past, which they are ostensibly trying to preserve, as well as of the present. Naturally, a Jewish museum in Russia has to grapple with local historical and cultural heritage and to stake a claim in the national past: Which stories are told in its displays? What is highlighted and what is omitted? How is the Jewish story integrated with the broader national narrative?